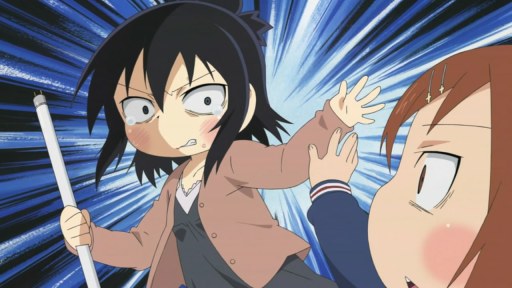 Here’s an episode where we introduces a “normal” character called Miyashita or Miya-chan. Apparently, she has trouble making friends with Hitoha! Even changing her hairstyle and personality wouldn’t recognize neither Hitoha nor everyone.

Oh, Yuki-chan… Why are you so moe with those eyebrows?

In Yabecchi’s room segment, things are not so good for Yabe-sensei! 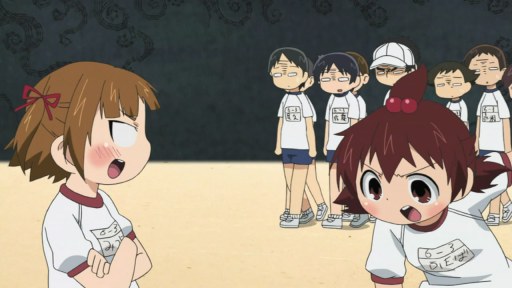 Anyway, they will have a “boys vs girls” dodgeball match. Oh yeah, these three girls wants to have Satou-kun hit them! Man, they’re hopeless after all… They even made a headshot to Satou-kun, that one of the girls wants to bite her tongue as punishment. But who cares about that as these girls (one of them is Futaba-chan) wants to hit Satou-kun at the head! (Since headshots don’t count!)

Looks like Ogata from the Hopeless Fanclub is now playing soccer to impress Satou-kun! Maybe she’s watching Captain Tsubasa much…

Fantasy aside, Ogata is just starting to play soccer so she’s a bit sucky when it comes to skill. But when she’s jealous (The ball, that is…), Ogata’s skill is now on par with Satou-kun that she just intercepts it when Satou-kun has the ball! 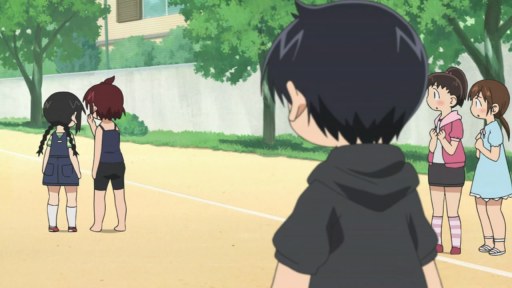 Oh, what is Futaba whispering to Ogata? Wait a minute, did I saw Ogata kick her panties because Satou-kun loves it that she doesn’t need it anymore?!

Final segment before ending this episode (and looking forward for Ep. 13), looks like Miya-chan is attempting to befriend Hitoha once more, thanks to Mitsuba’s info on her secret hobby.

OMG, Miya-chan is raping Hitoha! Maybe they suggesting that she’s finding that “hard thing” on Hitoha… I guess Hitoha is tired of those misunderstandings and decided to reveal to everyone that she’s an avid fan of Gachi Ranger!

Well, that’s Episode 12 of Mitsudomoe… At least Hitoha has friends in the process! Except for Miya-chan, though…

Last episode next week before premiering the second half in January 2011!