This episode focuses on Kazuha Migiwa or Kazu-chan for short!

Oh, and while they’re sisters (Yummy girl-on-girl action, so it’s NSFW!), her father however doesn’t recognize Akira as her daughter! Sad, but it’s true that this bastard has an affair with another woman. How come they didn’t get a divorce?

BTW, I don’t know what happened to Nao on this episode. But anyways, looks like Haruka has a thing on Kazu-chan.

Just don’t make it a bad end to this one! 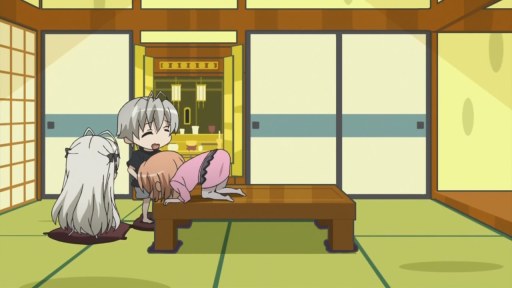 Anyway, let’s go to the omake segment where Motoka… plays like a dog and licks Haru-chan’s wang!

And to end this post, here’s a picture of Yahiro-san! (NSFW) Well, I hope Akira is alright for next week…

1 Response to Yosuga no Sora Episode #03