Oh boy, here we go again with the loneliness… Being alone is depressing!

Of course, being alone with Kagari is even more depressing! Heck, Kagari even carve a heart on Yomi’s chest, adding more creepiness to her character considering that she got in a car accident and paralyzed mentally.

On the other side, Black Rock Shooter is still fighting against Kagari’s Chariot… with macaroons!

God, I’ll never look at macaroons ever again!!! But at least she gunned them down with her trusty gun.

Oh yeah, and as for Yomi… She decided to wake Kagari up from her nightmare that paralyzed her entire body.

That’s right, wake that yandere up!!! 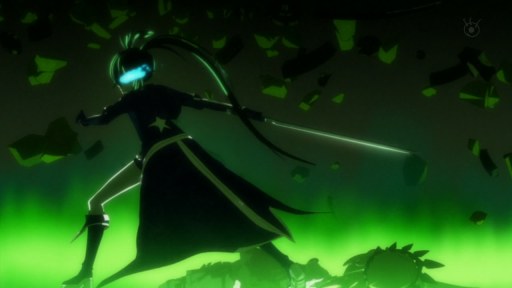 In the end, Black Rock Shooter beat Chariot by cutting off her head. You may thank Yomi and Dead Master for that. However, Kagari’s creepiness doesn’t fade away just yet.

And what’s worse, Dead Master is still on the loose when Black Gold Saw appeared to save her. Why did you do that!?

But anyway, there’s still time to find the owner of Black Gold Saw on the next episode or two.