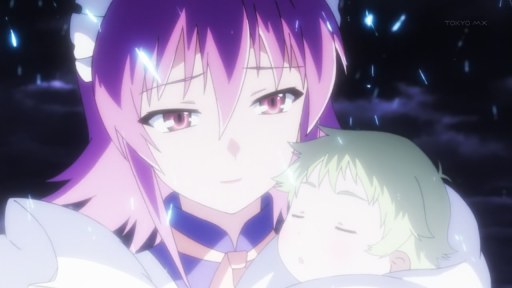 And here’s the final episode of Shakugan no Shana III. And since I have mentioned that there will be a new existence that is half-human and half-Denizen from Episode 23? Here’s the proof where Wilhelmina holds Johann and Pheles’ baby named Justus!

And since all of the Denizens are already at Xanadu, it seems that the Flame Hazes will follow suit on going there to the new world, which leaves Shana and Margery Daw staying at Misaki City.

Now that the new existence is already born and all the Flame Hazes are now at Xanadu, let’s end the feud between Shana and Yuji shall we?

And before the final battle will begin, here’s Lamies giving Yuji a present which repairs all damages caused by the Denizens in Misaki City… 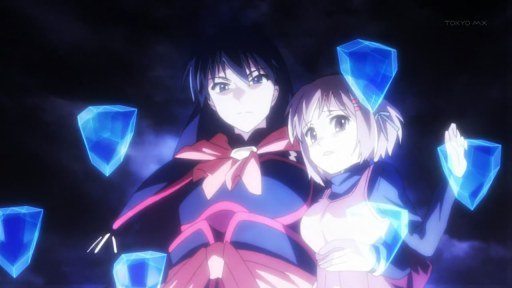 …and restores lost existences, including Yukari Hirai in which Shana holds her torch ever since she came to Misaki City. Yup, if Yuji gets Yukari’s torch back, there is no Shana existed in Misaki City.

And as for Xanadu, there is no Misaki City in which Yuji will reside there along with Kazumi after a fight… Just a copied city without a name!

But what the heck, let’s get it on with Sydonay the Giant Knight against Margery Daw the Six-Headed Wolf-Bear! 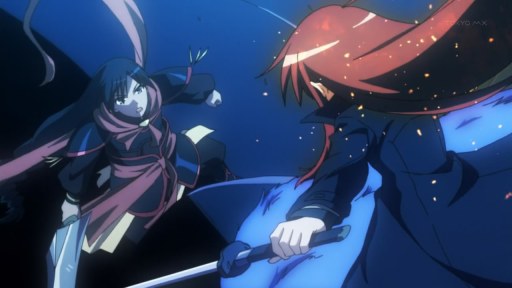 I don’t care if Yuji leaves to Xanadu alone, just resolve it already!

And you Shana, just be like a tsundere again… Even shouting “URUSAI URUSAI URUSAI!!!” to Baka Yuji!

Oh, and let’s play “Hishoku no Sora” by Mami Kawada as a background music for the final battle! Very fitting when this series reaches its conclusion…

So anyway, Shana unleashes her flame of love on Yuji… 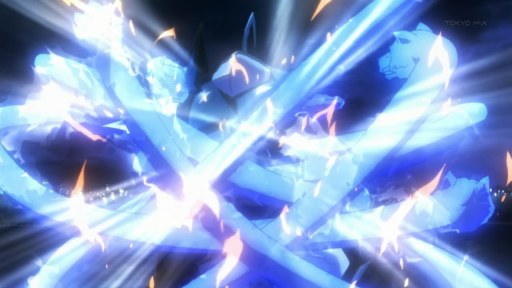 …while Sydonay will face the power of a million Flame Hazes with a single strike by Margery Daw!

And looking at the size of the explosion, it seems that Sydonay can’t survive that. Yes, this final battle is all over!

That’s right, Margery… The battle is over, and you’re free from fighting!

Now go on a honeymoon with Keisaku Satou, will ya?

For Sydonay, it seems that he’s reunited with Hecate and they’re climbing the stairway to Heaven!

Good for him, that loli- I mean, lucky bastard!

And as for Yuji Sakai, he’s no longer a Torch but a real human being! Yes, I’m glad that their sexual tension has finally resolved! Congratulations!!!

Anyway… After 7 years, it’s the end of the era for Shakugan no Shana! While the first and second season is better, this third (and final) season picks up the pace from the second and continue it to its conclusion with details that even myself were kinda off to understand. Man, I think I need to read a manual or something to learn some confusing details!

But what the heck… At least Yukari is back, the Sakai family has a baby, Wilhelmina is a-okay at Xanadu with Justus, and Yuji and Shana finally together again as they walk together to the new world!

Despite the magic-babble to the third season, Shakugan no Shana is finally over! *cries*

And BTW, I’ll be wrapping up watching Zero no Tsukaima with the fourth season. But the question is, is it really the end for Zero no Tsukaima? Gee JC Staff, don’t be like SHAFT for their Negima! Final. And as for you Mr. Noboru Yamaguchi, please conclude your series before passing out for good.