But first, they need to push Rei-chan harder if they have the chance to win. Although it’s gonna be tricky since he can’t swim like a pro yet.

And BTW, it’s dangerous to swim alone (even with floating devices) on a stormy night… Good thing Makoto saved him ’cause Rei would be a goner if he was swallowed by the sea! 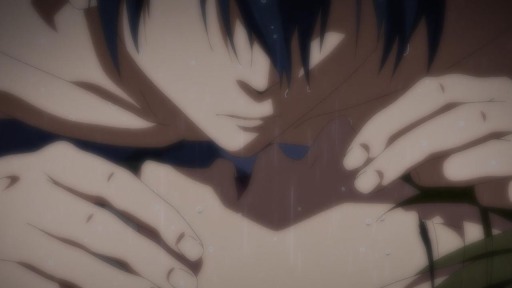 I know you girls want this, but too bad for you!

Speaking of Makoto, this guy has a tragic backstory which prevented him from swimming competitively. No wonder he doesn’t like anyone drowning to their death!

But at least Haruka snapped him out from retirement, which is why he formed the Iwatobi Swim Club.

Other than Makoto and Haruka, the rest is a-okay since they got shelter and some food (pineapple mackerel, ugh…) to keep them at ease until the storm subsides.

Still, I think they should stop bullying Rei-chan with their subtle pranks. He might quit if they went overboard.

But anyways, their training camp has come to an end. Right now, they should be a bit stronger now since they swim across four islands, which is insane compared to Samezuka’s training regimen.

Oh well, on to the next episode!