Posted on October 1, 2013 by benigmatica

It’s time for the finale of Railgun S! And you’ll think that Misaka and Shirai would go alone and defeat those evil nerds?

Nope, they have company… And they’re here not to become fodders, but badass helpers! (Including the MISAKA sisters!)

Anyways, Misaka and the gang are here to crash Aritomi’s party, using the power of friendship! And BTW, this episode has 4 songs from fripside, ranging from “LEVEL 5-judgelight-” to “eternal reality”.

The only thing I’m disappointed was they forgot to put “Only My Railgun”. Then again, it was used during the fight against Therestina from the first season.

Now then, it seems that their crashing went smoothly… 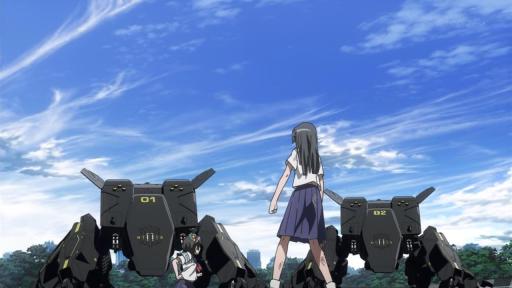 Until those nerds launched their big toys to play with! I guess the party crash is over, right?

Wrong, they got backup, starting with Ms. Yomikawa and Haruue-chan. And they didn’t just came here empty-handed… 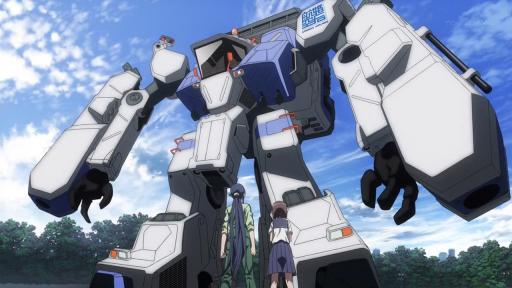 They got a transforming robot brought you by the Kongou Company. Even Mitsuko’s company needed some action!

And so was Saten and Uiharu. I have a feeling that Saten would see Uiharu’s panties all day when she’s on the bottom! 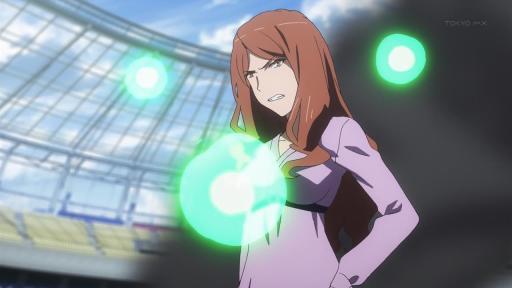 Also, there’s more backup courtesy from Mugino and her mates from ITEM. While I like having more allies, especially them on this episode, I still have some grudge when they kidnapped Shinobu back in the Level Upper arc.

So thank you ITEM, but I still hate you though.

At last, Misaka and Febri reached Aritomi’s secret lair. But unfortunately, it was too late since he decided to do a last resort plan on bombing Academy City, while he takes his own life because he’s such a sore loser!

Of course, who wants a nerd to commit suicide? Just a slap to the face will tell Aritomi that he sucks being a villain. I guess there’s a reason why Dr. Kihara calls his plan a “summer vacation project”.

Now Aritomi, you’re a genius, but you’re an idiot for world domination. So stay put Aritomi while Misaka and her friends are saving Academy City!

For the final act, Nunotaba, Saten, Febri are trying to wake Janie up, while Misaka and Shirai are at the stratosphere.

Of course, the latter will try to pull something so insane that it’s more awesome than the fight against Therestina from Season 1…

…like firing a missile by using Kongou’s mecha as a bullet. Sounds crazy, but it fuckin’ works!

And that’s how the Silent Party was crashed. Thanks to the Railgun and her buddies (not to mention ITEM and the sisters), Academy City was saved from apocalypse!

It could be worse if Academy City was ridden with berserk robots and other machinery thanks to Janie’s hair.

As always, there is a time where someone has to go. I guess it’s time to say good-bye to Febri. We’ll miss you…

Heck, even Uiharu is crying now that she and her sister leave overseas for keeping themselves alive!

Speaking of Febri’s sister, Janie woke up after Misaka successfully destroyed the missile. Like her little sister, she’s gonna leave too.

For Shinobu Nunotaba, it’s a good thing that she’s safe and sound after being held by the STUDY group, where in the manga, her whereabouts are unknown.

Good thing Shinobu has friends even if she’s out of Academy City. As for those nerds…

…there was a rumor that a certain Misaki Shokuhou erased their memories and they were apprehended afterwards.

I guess she’s involved after all despite having a cameo appearance.

Anyways, this second season of Railgun has ended. While I enjoyed the Sisters arc despite having that arc appeared already in Index Season 1, the Silent Party arc was a nice addition in explaining why Nunotaba disappeared.

Of course, I don’t like those nerds acting as villains. They’re just not evil enough, and they’re wannabes in my opinion!

But oh well, maybe I should wait for the third season of Index after watching that Endymion movie!