“You can’t beat me, L-Elf! And that pilot of yours can’t scratch my unit!”

“Come back in two months when you’re ready!”

And that’s how Cain rub salt on both Haruto and L-Elf’s wounds. Anyways, it’s back and it seems that Module 77 is saved from being assimilated by the Dorussia Empire, and they managed to arrive safely at the moon. Too bad that Cain got Valvrave Unit 2, and he almost got Valvrave Unit 1.

Although they were in the brink of defeat, it doesn’t stop Haruto and the rest for liberating the world, and the entire universe from the Magius. Still, even though he’s a whiny emo kid who doesn’t want to attack his friends (due to vampiric reasons), Haruto will grow a pair of balls if he wants to end the curse.

Too bad that becoming a man of destiny will have less time with Shoko (since she’s a prime minister getting serious on her job), and will have more time with Saki (since she’s ready to get raped by Haruto at any time).

On the other hand, Valvraves can’t be refueled by any means because they’re powered by runes. The only way to refuel them is by killing them, sucking their blood (just like Ep. 1), or rape them. BTW, the last one might be effective though.. D’ohoho!

Meanwhile for the Magius, it seems that they’re unaware that the Valvraves were created behind their backs until Ep. 12.

For now, they’ll just observe the conflict until they show them who’s the real boss. 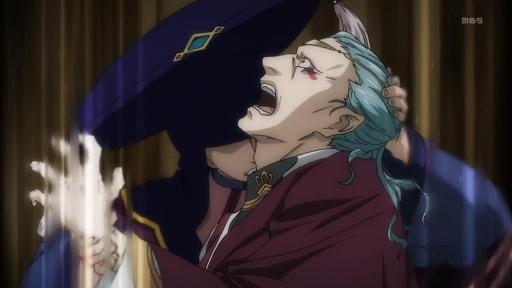 And BTW, the Dorussia Emperor Amadeus becomes a vampire just like Dio Brando. Still, he’ll be killed eventually by being stabbed in the back by Cain, which I’m thinking of he’ll become the final boss.

As for the president of ARUS, he’s irrelevant and he’ll be killed too!

Anyways, next episode is all about Akira and her challenges on interacting with the rest.