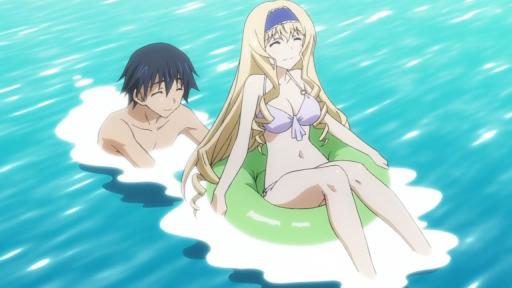 Remember what I said back in Episode 1 where “If only 8-bit would make a long version of this episode instead of resorting to montage.”? Well, it seems that 8-bit created one.

However, I’ll be covering the vacation part of Ep. 1. With that being said, let’s begin with Cecilia making her first move…

…and you know what that means for the rest of Ichika’s harem. Good thing Cecilia hid her prince underwater, but she almost drown Ichika with her British-sized bust. Lucky bastard he is!

After almost being drowned by Cecilia, Ichika was joined by Charlotte for a couple water slide. Naturally, he accidentally grabbed Charlotte’s French-sized boobies, but you know that her bust can’t be beaten by Houki’s… 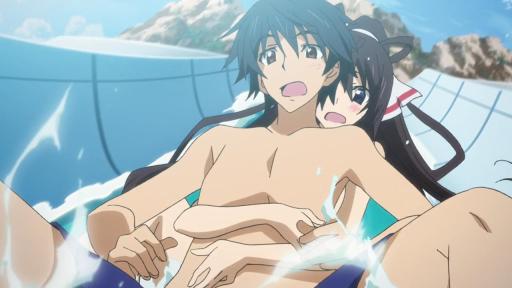 …since she’s pressing it on Ichika’s back. Y’know, if Ichika is Issei, he’ll be very happy!

On the other hand, there’s Yamada-sensei and Ichika’s sister Chifuyu, who are getting their R & R before they’re called for an emergency. Oh, and it’s not about Tatenashi, it’s about Madoka Orimura’s attack at a North American base.

Anyways, that’s it for the long vacation version of Episode 1. I’m hoping that if there’s season 3, 8-bit should fix Ichika’s obliviousness… It’s pretty annoying to see him like that!

This entry was posted in IS: Infinite Stratos 2, OVAs, Movies, and Specials and tagged #IS_anime, anime, Infinite Stratos, special. Bookmark the permalink.
%d bloggers like this: