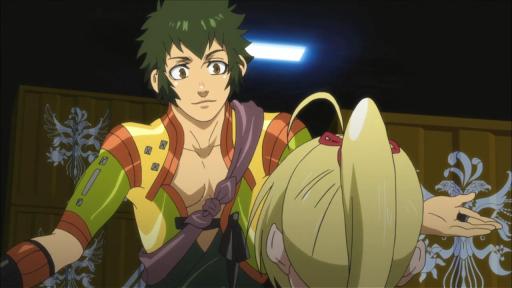 Ah, Hideyoshi. This man who is quirky, acting like a monkey as told by Nobunaga…

…and a badass future warlord, conquering both stars after he killed Nobunaga! Wait, what?

In any case, this is the story of Hideyoshi’s rise from a peasant to a future warlord. Of course, he was motivated on joining the Oda army because he wants to avenge his sister Asahi from being starve to death.

And who starve his sister? Well, it’s the Oda clan what not! He’s actually going to kill Nobunaga after Hideyoshi make friends with the Fool of Owari. But he later changed his mind and instead help Nobunaga on claiming both heaven and earth… unless there’s an opportunity for the monkey to assassinate the fool when Nobunaga lowered his defenses.

But anyways, it’s time for the episode to kick into high gear as they try to steal one of the Giant War Armors from Caesar’s forces at Takama-ga-hara. Unfortunately, it seems that Brutus has anticipate their infiltration mission and decided to kill them on the spot.

For a man who plotted to- Wait, I don’t want to spoil unless you read history books. But let’s just say that he won’t be a pushover and he’s an opportunist just like Caesar.

But luckily, Hideyoshi found one of the Giant War Armors and he activated it with the help from Nobunaga. Using the Regalia of Wind, Hideyoshi’s War Armor “Goku” (He should have named it Son Goku!) uses his primal instincts to beat Brutus at his own game.

Sorry Brutus, you should aim higher on being the opportunist when Caesar lowers his guard!

As for Hideyoshi, damn he’s happy that he got his own War Armor. Maybe next time he’ll meet Amata and his Aquarion on the next Super Robot Wars game!

At this point, it’s inevitable that this show will continue until June 2014. So, this show is included on the 2014 Anime Season. Until then, watch the last two episodes from the month of March!