This is Sumi, the next student council president that will replace Mitsuki next year…

Then again, she’s not yet the president ’cause she’s busy fondling with TAKAYAMA HARUKA’s D-cup titties! A yandere Haruka kills Sumisumi and her body was not found afterwards… I don’t know if that new president will survive her attack. 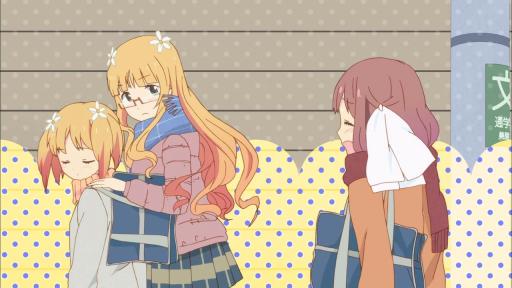 Anyways, time for the penultimate episode where Mitsuki-kaichou decided to move her little sister Yuu-chan away from TAKAYAMA HARUKA!

You know, Mitsuki acted like a dick (in Haruka’s mind) and now it became a reality. But do you notice something about Mitsuki-kaichou, other than waiting for her graduation?

That’s right, Mitsuki is so dense at herself that she actually drifting away from Haruka. Y’know, realizing that she’s in love with Yuu’s friend, yet Haruka is so busy kissing her little sister!

Well, that’s sucks for you ’cause you’ll be too late by then on confessing to Haruka! Oh yes, and you might get graduated on the last episode don’t be such a bitch to TAKAYAMA HARUKA!

As for Haruka, she’s not gonna give up until Mitsuki accepts their relationship with Yuu-chan. Good luck there!