Well, it’s kinda sucks that you’ll have to drop out!

However, it seems that he got an unexpected visitor. You see, 2D-kun convinced Kouko-chan to visit Banri, all while hacking their e-mail accounts like a madman! But don’t worry, he’s not gonna use his two friends’ accounts for profit.

In any case, Kouko dropped by to say “Hi!” to Banri, gave him a present, and left.

Of course, seeing Kouko-chan again means that he’s getting his college memories back, and now Banri chases her!

However, it’s not smooth-sailing for Banri as he’s getting a bit trippy when crossing the bridge. So many Banris from different timelines, so little time to interact with them…

Well, except for Ghost Banri who is here to stop him and rant about Linda’s reply. You know, you should have been pass on and rest in peace, but you caused all this trouble from the beginning.

Since you want closure on Linda, well here you go!

That’s right, Linda says “Yes, I love you Banri!” and now Ghost Banri finally rest in peace. Well, I’m glad that Linda who is hiding her feelings from the beginning has finally confess to Banri, just to bring closure to the subplot of Golden Time.

Of course, it’s too late now because Banri wants to get Kouko-chan back. Oh, and as for Ghost Banri, I hope he doesn’t go back and possess Banri because it’s not enough with just a confession. Please, bury the hatchet already! 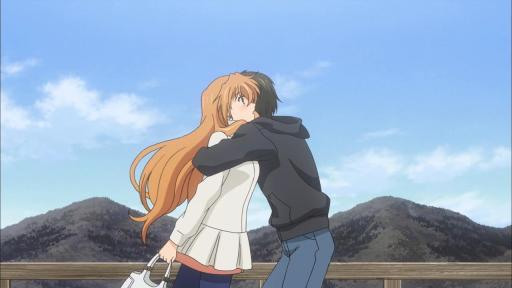 And so, Banri finally caught up with Kouko-chan, reconcile, and kiss. Well, it’s an emotional event where Kouko-chan accepts Banri, no matter what he is. And lastly, Banri finally gave Kouko the ring he kept for so long. Oh yeah, and good thing he didn’t lost it forever if it wasn’t for Ghost Banri finding it.

But yes, this is the end of Golden Time where Kouko and Banri are finally together again. For the rest, Linda is finally dating with Mitsuo, while Chinami is forever friendzoned. But hey, at least she has 2D-kun to accompany with.

In any case, I’m glad that Golden Time has a happy ending. However, I’m disappointed overall that it has potential to be great like Toradora! It felt so short in the second half that I feel pity over Banri and Kouko regarding their relationship and their lives. If it wasn’t for the supporting cast, they would fall apart.

Oh yes, as for the happy ending, I feel that I want it more. If only J.C.Staff would make an OVA afterwards for the epilogue.

But anyways, that’s it for Golden Time… And like any other story, Banri and Kouko lived happily ever after, the end!