And now, it’s time for the finale of Sakura Trick where President Mitsuki is going to graduate. Of course, last episode she realized that she loved TAKAYAMA HARURA! 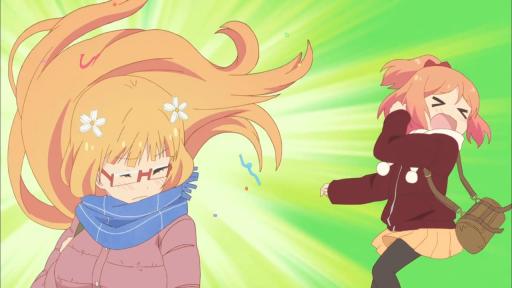 And BTW, it seems that someone has a crush on Mitsuki-kaichou… That girl with a short ponytail is none other than Rina-sempai. She’s the girl who always smile, but I think she got a one-sided love for Mitsuki. 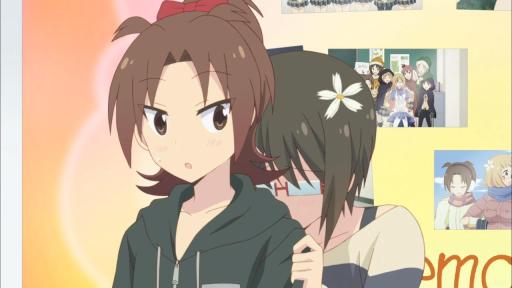 In any case, the finale started off with a party for Mitsuki and Rina. It was a good party, except when Kaede is crying all of sudden while impersonating Mitsuki-kaichou. Well, it’s a rare sight for a character who is a prankster to Haruka most of the time.

Oh yes, and this party followed Mitsuki’s confession that she loved TAKAYAMA HARURA! Always remember that if Saki Fujita voices a student council president, call the character with his/her full name… and with caps if necessary!

But, at least she finally confessed to Haruka which is followed by a kiss… to the forehead, unfortunately.

Well Mitsuki, you finally did it! Of course, I don’t think Haruka will ever date with Mitsuki… I mean, Haruka has Yuu-chan and their relationship is way longer.

Oh yes, and Yuu-chan is mad at Mitsuki just because that she has a crush on Haruka, doesn’t equates to forbidding Yuu-chan on kissing Haruka.

In any case, Mitsuki’s crush on Haruka is finally over and she’s now graduated!

As for Haruka and Yuu-chan, they continue their relationship as normal. Who knows, they might go further through college!

But that’s the end of Sakura Trick. What can I say, it’s a surprising good anime from Houbunsha and Studio DEEN that does a good job on oozing with yuri, not to mention having similar art-style as Hidamari Sketch. They did a great job and I’m hoping for another season…

Anyways, it’s time for Haruka, Yuu-chan, and their friends to say good-bye! They have classes to do as 2nd year students, and they’ll do kinky things afterwards!