You know what, these two should be friends. Then again, they’re competing for a single cyborg named Rentaro. 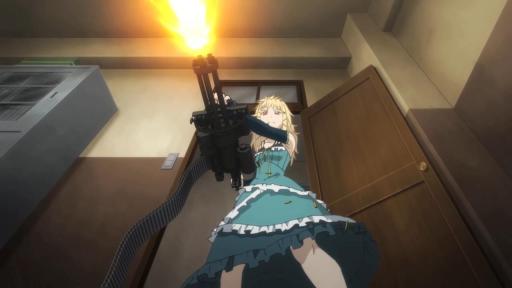 On the other hand, the assassination attempt continues as Tina Sprout is adding Kisara Tendou in her hitlist, along with Seitenshi-sama.

Oh yes, and she’s good at firing Gatling guns other than sniper rifles!

Still, it’s going to be one major suffering as Rentaro will have to fight Tina Sprout no matter what. Oh, and to add fuel to the fire, Tina’s promoter is a Varanium cyborg just like Kagetane and Rentaro. Well, that’s beyond suffering!

Anyways, on to the next episode… where Rentaro has to save Enju from being slaughtered by Tina Sprout! Ugh, being a Promoter is suffering!