Today marks the start of the second batch of Seitokai Yakuindomo OVAs. And as you can see from the episode numbering, it continues off from Ep. 13 of Season 2.

With that being said, here’s Episode 14 of Seitokai Yakuindomo*! Oh, and Furuya-sempai is there…

Push-ups aside (or air sex aside), there’s a question of who will be Shino’s successor after she graduates. Well, there’s a high possibility that Takatoshi will succeed as student council president.

Also, there are rumors that Tsuda-kun is dating the president…

But then again, it’s all Hata-san’s fault for spreading it. Now, she’s being reprimanded by Kaede, although it seems that Hata-san can get away with anything (except for her equipment)!

For the rest of this episode, Ousai Academy’s student council officers are having fun during winter. Yeah, the usual skiing and snowball fight! 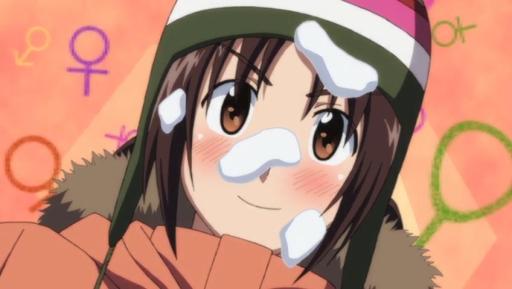 And speaking of snowball fight, take a guess on what Kotomi is thinking? Bukakke perhaps, ’cause it looks like one when she got a snow facial!

Other than winter activities, things get weirder during summer like wearing winter clothing and endure copious amount of heat. Yeah, it’s kinda silly! 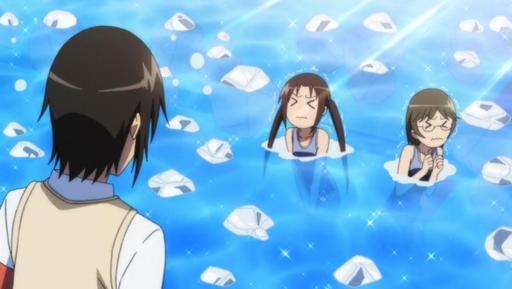 But if don’t want the heat, why not douse yourself in almost-zero degree centigrade of water, and see how far you can stand the freezing temperature.

Then again, it’s useless when ice melts easily during the summer heat. They should have either put a big roof or use liquid nitrogen, although the latter is far dangerous to use since it might froze them to death.

But what the hell anyway, this is anime and Ousai Academy’s student council officers can do it unless they’re out of budget!

Anyways, that’s it for Ep. 14 of Seitokai Yakuindomo*. Oh yeah, let’s end this post with Furuya-sempai!