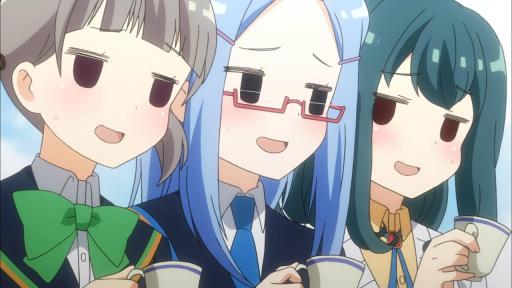 This post is brought you by some random girls from Girlfriend BETA. Supposedly, I’ll be opening up with this post with some random image, but this one is fitting as there’s nothing but cute girls doing random things… lots of them! 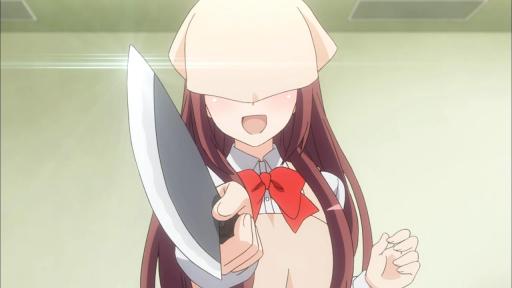 While we’re at it, here’s student council president Amatsu holding a knife while being blindfolded. You know, you should at least drench those onions in water before cutting them.

With that said, Fall 2014 has reached its halfway mark! 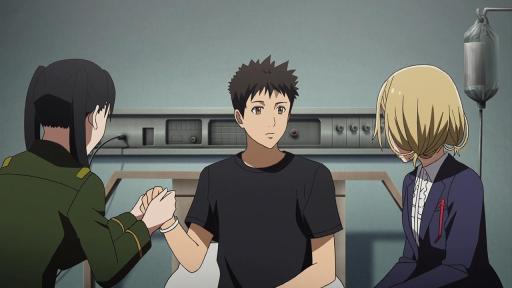 I’m gonna start with Argevollen as this mecha anime series is becoming worse. For one, it’s no longer a fight between Arandas and Ingelmia as both countries are being controlled by a business conglomerate called Viltriveld, which supplies both Kreigers with U-Link System via Kybernes and Fordergrunt, respectively.

While in the subject of U-Link System, it causes a pilot having brain damage and unstoppable rage in which is derived from Reika Nanjou’s experience of losing control, hence it was called the NR Syndrome.

So far, both Tokimune Susumu and Schlein Richthofen experienced this phenomenon, and I have to say that both of them will end up becoming an empty shell if they use their respective Kreigers too much. God, this is becoming a tragedy! 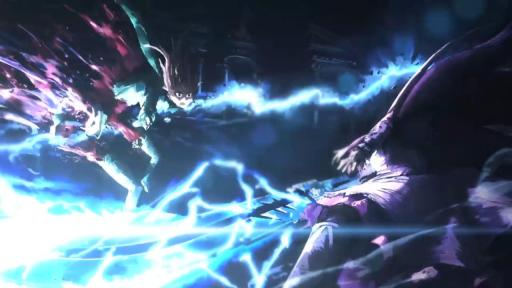 Meanwhile, Akame ga Kill! is gearing up to its finale with character being killed left and right. So far, the Night Raid only lost Chelsea where she underestimate Kurome and her abilities. Meanwhile, the imperial side got more casualties with Esdeath’s Jaeger group lost two member. One of which is none other than the hero-killer of justice Seryu!

Sure that she’s fighting for justice, but alas Seryu is so messed up that she’s in league with other scumbags from the empire. Good thing Mine avenged Sheele’s death with fashion!

With that said, I think this series will overtake the manga source and forego with an original anime ending. Then again, this series might end badly! 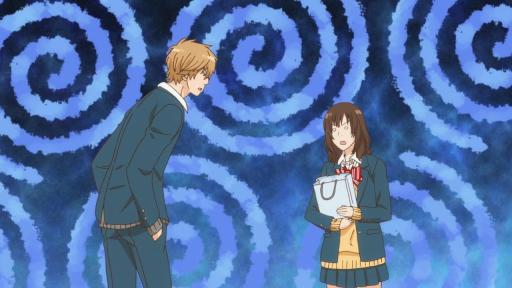 Moving onto Ookami Shoujo to Kuro Ouji, it seems that it goes from potentially hopeful to something worse. For one, both Erika and Kyouya became a couple. But then, Kyouya broke off with his bitch because he caught Erika cheating.

While it’s Erika’s fault for giving some chocolate to someone like Yuu Kusakabe (voiced by Ayumu Murase by the way) before Kyouya, I think his dickich personality has gone too far!

Until then, this show is getting worse in the shoujo anime genre, despite having both Takahiro Sakurai and Kanae Itou in it. 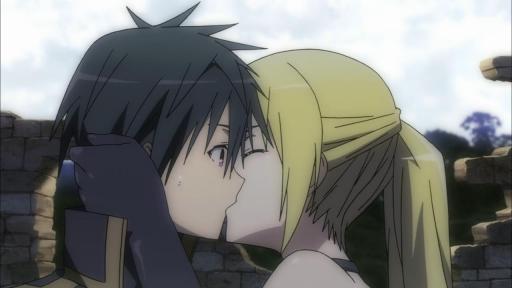 Trinity Seven has reached its halfway mark with Arata and his harem are facing their greatest challenge yet as they’re trying to stop Lieselotte Sherlock, the older twin sister of Serina Sherlock.

With that said, the next episode or two should take care of Liese once Arata powered up from his training with Mira and Akio. But for the time being, it’s Headmaster’s turn to shine and teach Liese a hard lesson! Oh yeah, even though it’s somewhat generic, Trinity Seven does slightly better in execution. 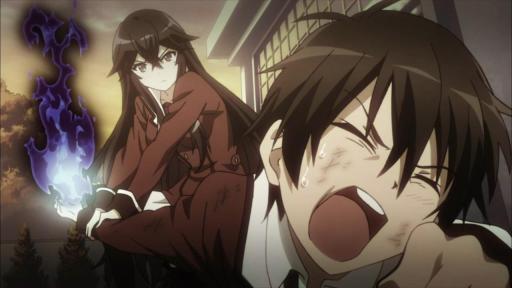 While Inou has moved its timeslot from Tuesday to Thursday, their everyday battle is nothing more than slice-of-life shenanigans with Jurai Andou and his already-useless eighth-grade syndrome powers got nothing to contribute. Okay, scratch the “nothing to contribute” part. In fact, the eighth-grade syndrome powers was pretty much there for either comedic effect, or as an hindrance to their daily lives in the case of the Literature Club members.

Also, despite Andou-kun being a “fourteen-sick” guy, Jurai reminds me of Ken Sugisaki from Seitokai no Ichizon where he’s being sincere and helps people like there was a time he convince Tomoyo on not giving up her dreams to become a novelist and so on…

Even though it’s Studio Trigger’s second TV series after Kill la Kill!, I feel that the it needs to be more exciting. But kudos to them on fleshing out the characters.

Meanwhile, Daitoshokan doesn’t improve from its first episode. Even though there’s some story progress as Kyoutarou Kakei was selected to become the next “shepherd” of Shiomi Academy, it feels so boring that the only thing that amuses me is their library cat.

Come to think of it (and barring Fate/Stay Night: Unlimited Blade Works), visual novel adaptations in Fall 2014 are not being favorable with Daitoshokan no Hitsujikai, Ushinawareta Mirai wo Motomete, and Le Fruit de la Grisaia having a bad reception because the adaptation is either boring or messy.

At this point, Daitoshokan no Hitsujikai has no hope of becoming more interesting. 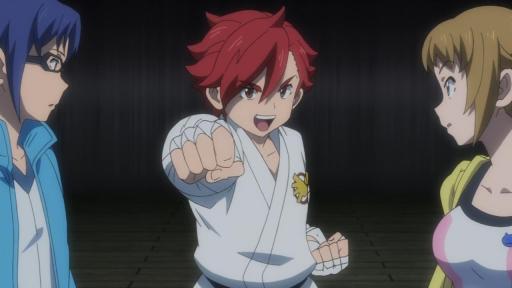 While their teamwork is a work-in-progress with Sekai and Yuuma having different fighting styles (and a lot of bickering from each other), it’s gonna be a threat to the under-19 Gunpla Battle World Championship if they improve not only in teamwork, but themselves.

Oh yeah, and by the way, Fumina ditched her GM Cardigan for Winning Gundam. While it can provide both Build Burning and Lightning Gundam with more power, it’s going to be a big target from opposing teams if Try Fighters are not careful.

Other than that, the series is gaining strength-by-strength as well as having more cameo appearances. Maybe in later episodes, Sunrise would show some Advance of Zeta or G-Generation mobile suits apart from AGE and G-Reco. 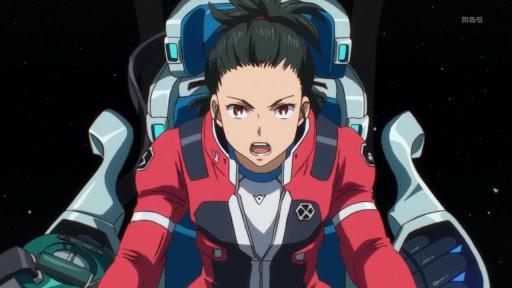 Speaking of G-Reco, seems that it’s becoming more of a proper Gundam series as the Capital Army becoming the bad guys similar to the Titans from Zeta Gundam or A-LAWS from Gundam 00, but having that Knight Templar feel to it.

Also, the Capital Army got a Char clone of themselves in the form of Luin Lee, who proves himself that being a Kuntala isn’t just for fodder since his race is bred to be eaten. Gee Tomino-san, are you bringing cannibalism to your Gundam series?

As for Bellri Zenam, he’ll eventually join the space pirates right after seeing the fate of his mother Wilmit Zenam, who is disturbed at seeing the Capital rearming themselves with mobile suits. I’m hoping that Bell’s mother stays alive on the next episode. 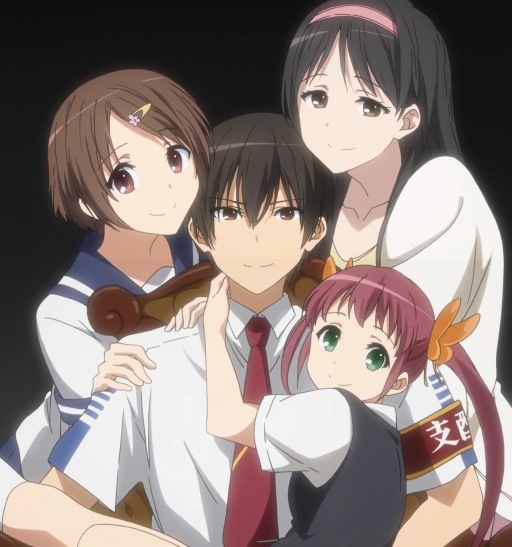 And to end it, here’s Seiya Kanie and his three new recruit sitting beside him… LIKE A BOSS!