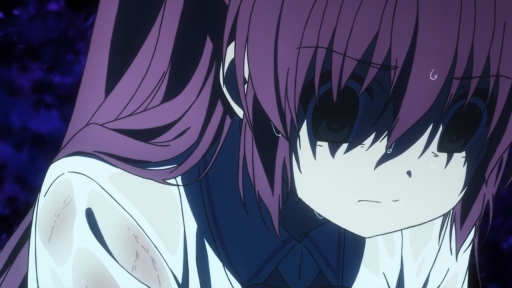 Ladies and gentlemen, this is the finale to this OVA series! I gotta say, Kanata Futaki’s story arc is gonna drop some drama bombs along the way…

Continuing from Episode 7 where Kanata is still shell-shocked because some students are bad-mouthing behind her back, it was revealed that the Futaki family are marrying her daughter off to the head of the Saigusa clan.

Yes, that’s Haruka’s family where they treat her like crap!

What can I say, Kanata- No, both her and Haruka’s respective families are a bunch of assholes! Really, I feel contempt when Kanata and Haruka’s family are involved on this nightmarish matrimony!

So, instead of just leaving it, why not crash it courtesy of the Little Busters! As Riki and Haruka don’t want to see Kanata having a miserable life, they plan to take the bride away… 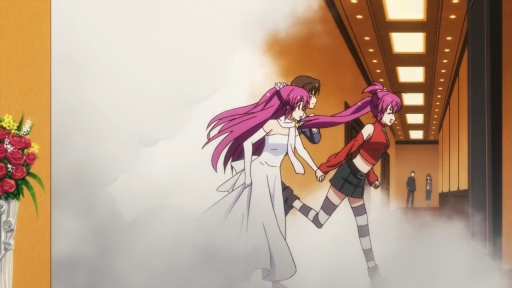 …and make a run for it. I have to say, that’s the most epic way to disrupt a wedding ceremony. Kudos to both Riki and Haruka on pulling this stunt! 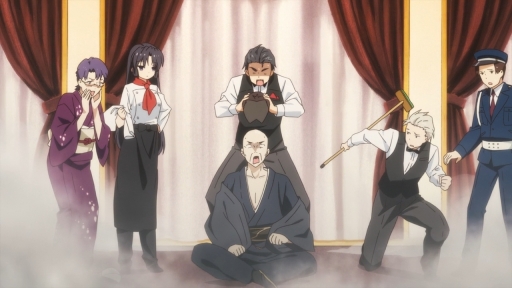 Oh, and it’s not just Riki and Haruka, but the whole Little Busters ranging from the Natsume siblings acting as decoys to Kengo, Masato and Yuiko beating the hell out of those two jerkass clans.

Although Mio tinkering the electric box is reasonable as she wants to black-out the building for Kanata’s escape, having Kud-o and Komari disguising themselves as old people is pretty ridiculous!

But what’s important is that Kanata’s rescue is a success and I’m sure that she won’t be returning to her home as it’s full of jerkasses who only care but themselves!

Likewise, Kanata has a home to return to in the form of Haruka Saigusa and the rest of Little Busters! 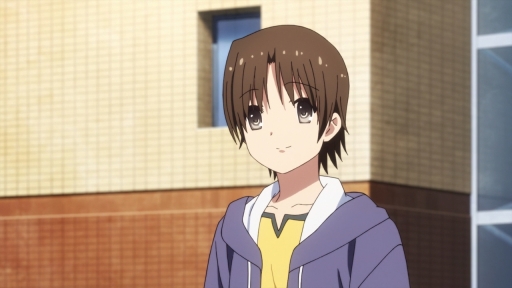 As for Riki, I’m sure he’s happy that he saved a heroine yet again!

Anyway, I have to say that Kanata’s story arc turned out very well. While Kanata’s backstory added some more info on her family, the fact that her engagement to the head of the Saigusa clan doesn’t explain much as it adds more drama.

Apart from that, everything looks great and that rescue scene is awesome, right down to Haruka holding Kanata’s hand. I have to admit, seeing the sisters holding hands is so touching and it serves as the conclusion to their plight from their respective families!

Speaking of conclusions, I’ll leave you with this final shot of all the character from this series.

Anyways, it is the end of Little Busters! See ya…

This entry was posted in Little Busters! EX, OVAs, Movies, and Specials and tagged anime, Little Busters!, ova. Bookmark the permalink.
%d bloggers like this: