Well, looks like both Amane and Yuuji went to the crash site unscathed. While she pay her respects to her fellow club mates…

…she couldn’t find a clue to Kazuki’s whereabouts. Then again, Yuuji’s sister might be dead all along!

Meanwhile, Mihama Academy is in a state of lockdown as the girls are taken hostage…

…by this old guy with a double-barreled hunting shotgun! Last week, I’m speculating on whether this old guy is actually the club advisor or not. That wasn’t the case on this finale.

As you can see, Sakashita-san is doing this lockdown to avenge her daughter’s death. Of course, his daughter had sex with a teacher before succumbing to skin disease, so he should blame the club advisor and not Amane Suou.

Then again, he definitely lost his wits and the club advisor is already dead! 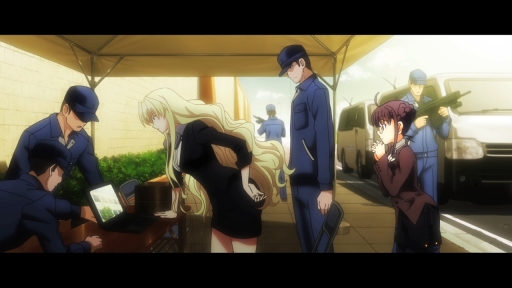 And so, Yuuji called his boss JB for backup as he couldn’t do it by himself. Also, he can’t contact the police because they might know that Yumiko Sakaki is alive.

Anyways, good decision for Yuuji as his fellow janitors are going to infiltrate the academy and rescue the hostages…

…all while he shows his inner Golgo 13 as Yuuji attempts to snipe 900 meters away from the target. 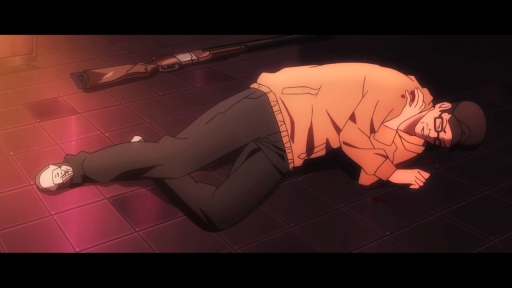 Well, he succeeds on hitting the target, but Yuuji should have made a fatal shot.

But hey, at least the target is crippled so that JB’s janitor squad can apprehend Sakashita-san…

…while Amane saves her classmates as she acts as a bait for Yuuji to shoot the target.

With that said, the hostage crisis is over and everyone is safe and sound!

As for Yuuji, I’m sure that his master is very proud of how he made that longest sniper shot! No matter where his master is, I’m sure she’s happy for what her student accomplished!

For my final thoughts, 8-bit sure did a good job on this adaptation of Le Fruit de la Grisaia despite the fact that they rushed some of the story arcs like Yumiko Sakaki and Sachi Komine. Of course, rushing it is no longer an issue for me as this series ends in an amazing fashion. It’s not that perfect, but seeing Yuuji pulling the impossible shot and returning back to his classmates is so satisfying to watch.

Now that this series is over, I’m sure that it won’t have a sequel that will cover the last two titles in the Grisaia trilogy. Then again, it was revealed that 8-bit will animate both visual novel titles (Labyrinth and Eden) for next year, so I’m hoping that they’ll improvement instead of doing the same rushjob.