Posted on January 4, 2015 by benigmatica

It’s Emperor Julio, and you know what that means… He was ordered by Embryo to eradicate all Normas across Arzenal!

With that said, Cross Ange has returned with a new opening and ending sequence, and I have to say that it’s so half-assed that I bet that the staff took notes from Yoshiyuki Tomino’s Gundam Reconguista in G, specifically the opening sequence where it reuses footage from various episodes!

So, with Arzenal being overrun by Julio’s rescue squad… or should I say Julio’s extermination force, Commander Jill commenced the Libertus operation.

And what a great way to start the operation is launching their assault carrier Aurora.

Although it doesn’t resemble Archangel, but it’ll get the job done right after most of the Normas and their Para-Mails are loaded!

Meanwhile, Ange rushed to her Ragna-Mail Vilkiss and sets off to destroy Julio’s fleet. However, Commander Jill wanted to save both Ange and the Vilkiss for her operation so she ordered Salia to get both of them back to the carrier.

Um Alektra, Ange doesn’t like your plan one single bit after revealing the truth that DRAGONs are human all along!

So, Ange give Salia an uppercut and brought her down to the sea. By the way, I’m sure that Salia will be alive after this… as an enemy! 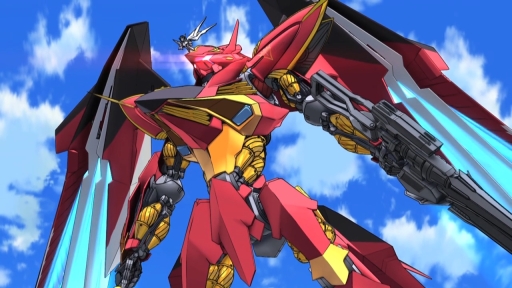 Oh yeah, and Ange’s Vilkiss can change form now. Well, two forms to be exact where Red Assault Form gives it power as seen on this picture while Blue Assault Form can teleport to other places.

Anyway, Ange is decimating Emperor Julio’s fleet like a hot knife through butter. And when she’s about to kill her bastard brother…

Seriously, this guy is one hell of a bastard. I mean, he revived Chris and a nameless Norma in from of Ersha, so I’m sure that both of them (except for that nameless Norma) would defect to his side.

And by the way, Toshihiko Seki’s singing voice needs a lot to be desired.

With that said, Embryo sings and activates its Voltekker-type shoulder cannon on his Ragna-Mail… 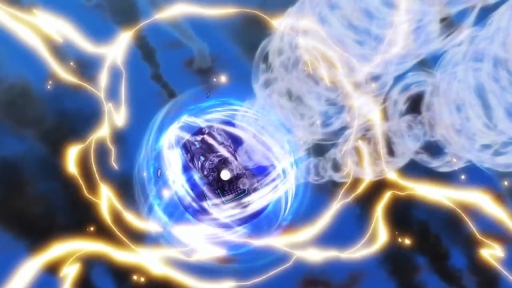 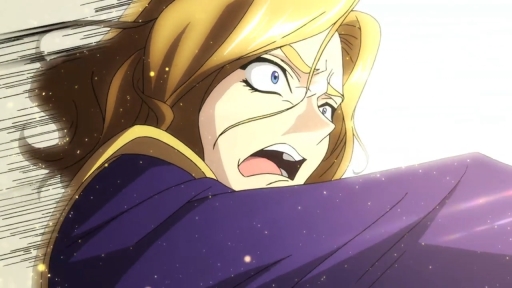 …killing Ange’s shitty brother Julio with a single blast that made a hole onto the sea. Good riddance to Julio, but I prefer Angelise delivering the coup de grace! 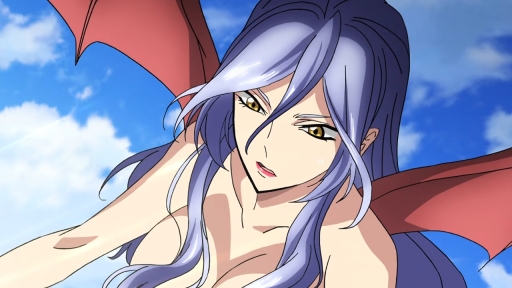 Oh yeah, I forgot about Riza too as she escaped unharmed. But with the death of Emperor Julio, I’m sure that she’s gonna manipulate Sylvia behind the scenes!

After all, Sylvia is Riza’s bitch that needs a whipping! 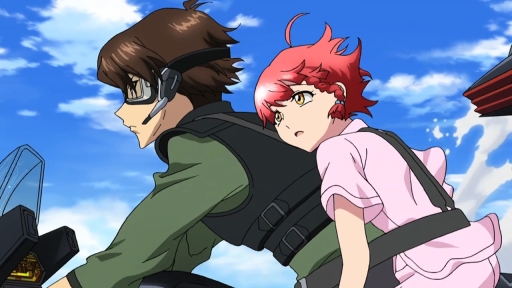 With that said, the battle is over. Of course, given the casualties from the Norma side, not to mention of having Chris, Ersha, and Salia defecting to Embyro, the Libertus operation is gonna be one long and painful battle!

One last note, glad that Vivian was saved by Tusk ’cause I’ll be sad if she’ll be killed or get captured by the enemy. Anyways, to the next episode!