Ah, Zuikaku and Kaga. They’re at it again and I’m sure that this episode will be just an ordinary day!

Hell, even Fubuki can’t help it nor stop their squabbling. Why lowering yourself, Bucky?

But then, Kaga got hit where she shielded Zuikaku from an unsuspecting torpedo attack. Honestly, they shouldn’t let their guard down!

Remember Episode 3 when a Mutsuki’s friend got sunk? I guess they forgot- I mean moved on regarding Kisaragi’s death!

So yeah, Kaga survived but she’ll have to sit it out for the next mission, and also take care of Akagi where she’s currently healing at the bathhouse! 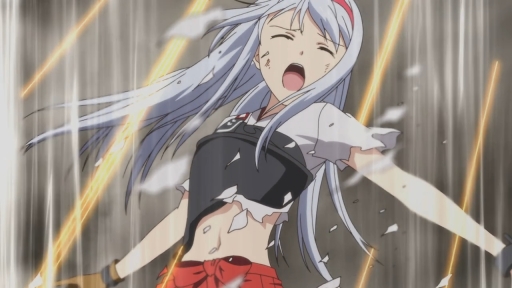 In Kaga’s place, it’s Zuikaku’s partner Shoukaku. Unfortunately, the Abyssal Fleet got her and Shoukaku is inching closer to death!

For some reason, the Abyssal Fleet are getting the upper-hand on this operation.

Speaking of the Abyssal Fleet, they know every move the girls made beforehand, as if they’re cheating in their favor!

And by the way, this Wo-class Carrier is the one who attack Zuikaku’s friend. In fact, she’s a counterpart to the Shoukaku-class as her hat houses many fighter drones. It doesn’t have any fairies however…

Anyways, Fubuki and the rest have arrived to save Shoukaku. Kudos to them ’cause Zuikaku will be pissed if Shoukaku sank!

Oh yeah, and Bucky shot Wo-class’s left eye so great job there flagship! Even though she’s not the boss so far, the Wo-class Carrier won’t forget this humiliating defeat!

And that’s it for this week’s episode. Finally, there’s action and suspense on Episode 7. Although Episode 5 has some fleet action, this week’s episode sure puts the tension on those girls despite the Abyssal Fleet having the advantage!