This little girl right here is the empress of the DRAGON people, the head priestess who wanted to save Aura from Embryo’s clutches.

Also, remember this girl? For those who don’t know who she is, that’s Officer Emma Bronson!

Then again, she doesn’t have any screen-time as she’s sobered up all the time until Emma quit drinking on this episode!

So let’s begin this episode as Ange and the Arzenal Crew, plus Tusk and Salamandinay’s DRAGON forces, prepare for the final operation of destroying Embryo once and for all!

But first, here’s something for the fans as Hilda…

With that said, it’s time for Operation Last Libertus!

And look what we have here, it’s Tusk and he’s piloting his mother’s Para-Mail called Arquebus. Oh yeah, and I just wanna add that he got Ange’s panties before this battle.

I’m hoping that he’ll survive this operation and his battle against Embryo ’cause he’s gonna return it… and get laid again! Oh, and don’t forget that Cafe Ange once Last Libertus is over!

Meanwhile, Ange got some errands to do as she points her gun at Sylvia… 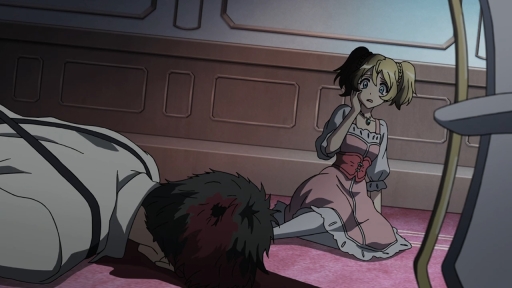 …right after Ange shot a rowdy civilian in the head in which Sylvia pissed her panties. Honestly, I rather have Ange kill Sylvia as payback from Ep. 10, but then she decides to spare her life instead as I found out that Sylvia can actually walk. Shocker!

But you know what, it would be better if Ange stab one of Sylvia’s thighs with a knife and tell her shitty sister that she can walk, just like Ricky Bobby from Talladega Nights. Just kidding, I rather have her sister being shot by a stray bullet!

Now that Ange is done giving her sister a hard lesson, it’s time to continue her mission…

But it seems that Salia wants nothing more than killing Ange for Embryo-sama, which is stupid for this bitch as Embryo simply abandoned his affection for Salia!

And so, Salia battled Ange even though she’s unwanted!

But then, someone interrupted her attack on Ange. Thank you Ersha for- Wait, Ersha is on the bridge so I was wondering who’s piloting this Ragna-Mail?

Oh wait, isn’t that Alektra aka Former Commander Jill? What the hell she’s doing here when she supposed to sit this battle out!?

But no matter, I’m hoping that Jill won’t ruin this operation! Anyways, two episodes to go…