And both Utaha-sempai and Eriri are very jealous right now. Hell, Sawamura got affected badly compared to Kasumigaoka since Eriri and Tomoya are childhood friends! Oh, and not to mention having Aki-kun’s face being planted onto Michiru’s boobies!

Anyways, Tomoya is persistent on recruiting Michiri to his doujin circle. However, she refuses as not only Michiru hated otakus but she’s busy with her band!

Aside from her “assets” showing, it’s sucks that his childhood friend is one tough cookie to please. And one more thing, she’s recruiting Mr. Ethical to become her manager for Icy Tail, which means that he won’t have time to make his masterpiece! Damn, Michiru got him badly! 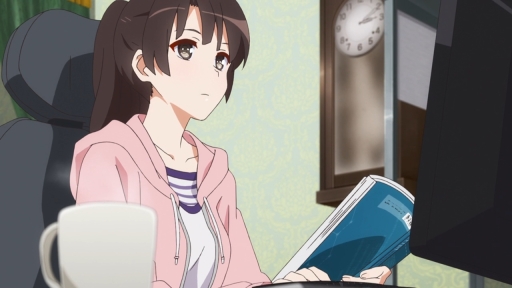 Meanwhile, it seems that Megumi Kato is getting serious on making their visual novel. Heck, she even went to Eriri’s house and do programming even if she’s a beginner.

Way to go Megumi, show them that you’re the main heroine and not being overshadowed by Eriri and Utaha-sempai! Anyway, Aki-kun accepted Michiru’s offer of becoming her manager…

…but there’s a catch as Michiru’s band will not only have to perform on their first gig, but they have to provide music for Tomoya’s visual novel!

First of all, this is very NSFW with that pose! And second, great job on being a magnificent bastard Aki-kun!

Oh yeah, and there’s one thing I forgot to mention. It was revealed that Michiru’s band-mates were actually otaku. It’s just that they couldn’t tell Hyoudou-san about their embarrasing hobbies as she hated everything otaku-related.

Of course, there’s no turning back now for Icy Tail as it’s time for them to perform on-stage!

And it turned out pretty damn well for their first gig! Not only Icy Tail made an amazing cover of “Sorairo Days”, but Michiru’s original song “Cherish You” was so uplifting that it fits better with Tomoya’s visual novel!

As for their visual novel, they finished it with no bugs nor grammatical errors… 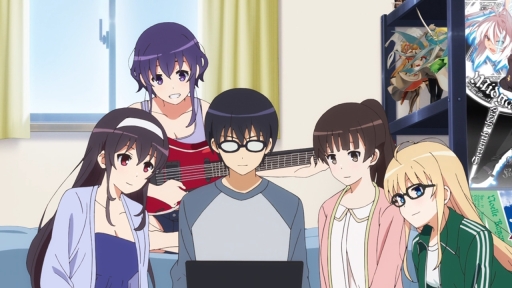 …but it’s for the first route only. Damn, I want it more as they have 2 months before Winter Comiket!

And that’s about it for Saekano. Gotta say that it’s a good anime to watch even though it plays every single trope throughout the series. Oh, and let’s not forget those lovely legs and cleavage from one of the girls (except for Kato-san which is sad considering that she’s the heroine)!

Although Saekano will just gonna be another series that boost up light novel sales, I feel that this show as well as WHITE ALBUM 2 needs another season! I’ll be sad if these shows didn’t get a second wind, but at least Tomoya Aki didn’t jinx with his “our battle has just begun” and such.

This entry was posted in 2014 Anime Season, Saenai Heroine no Sodatekata, Winter 2014 (January – March 2015) and tagged 2014, anime, SaeKano, season. Bookmark the permalink.
%d bloggers like this: