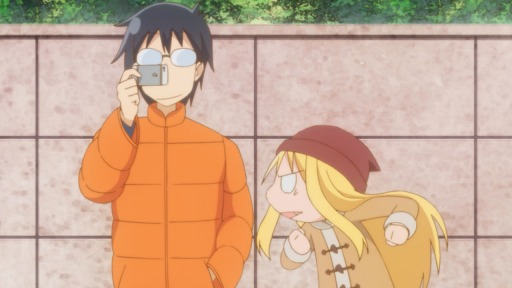 This post is brought you by Hajime and Kaoru from Danna ga Nani wo Itteiru ka Wakaranai Ken as the have another season! Good for both of them, and also the made lots of sex afterwards. Tee-hee~!

By the way, I’ll not gonna watch Plastic Memories and Triage X as I need to loosen up the load for Spring 2015. As for Kuusen Madoushi Kouhosei no Kyoukan, it’ll be aired in Summer 2015 instead. And speaking of Triage X, it appears that we’ll have to wait for Blu-rays ’cause Kadokawa said so! 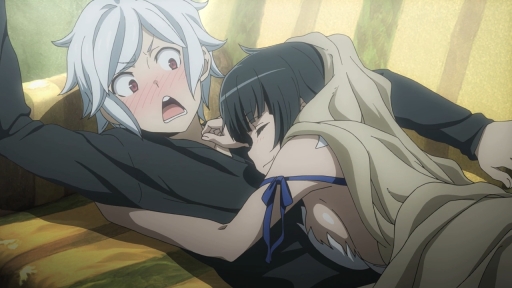 I’m gonna start with this J.C.Staff anime starring Yoshitsugu Matsuoka as his voice is so dynamically amazing. But you know what, he’ll soon surpass Takehito Koyasu in the future should he get more roles every year!

Anyways, DanMachi has RPG elements as adventurers battle monsters, gain looted items, and level up with the help of a god/goddess. In the case of Tsugu-Tsugu’s character Bell Cranel, he’s being taken care off by Hestia. And speaking of Bell, he has great potential to become a great adventurer as his stats can grow faster so long as his feelings didn’t waver.

Despite its somewhat good premise, the only thing that most viewers would watch DanMachi is because of Hestia and her sexy dress! Long story short, it’ll be just like any harem anime!

Here’s a manga adaptation by A-1 Pictures starring Hiroshi Kamiya. But instead of being like Nozomu Itoshiko from Sayonara Zetsubou Sensei, I saw Kamiya’s character Junichirou Kagami as the second-coming of Eiichi Onizuka from Great Teacher Onizuka!

Sure that he doesn’t have any physical strength like Onizuka, but Kagami uses his intellect to teach those troublemakers a lesson. It’s a great premise for Denpa Kyoushi, but the visuals needs a lot of work. But hey, Kagami-san is one hell of an ultimate teacher!

Wow, Madhouse is sure on a roll lately thanks to this adaptation of a shoujo manga. It’s a story about a big guy named Takeo Gouda who saved Rinko Yamato from a molester. However, Takeo thinks that this girl might fall in love with his bishonen buddy Makoto Sunakawa, which then flat out reject her feelings.

Well in reality, Rinko-chan has her eyes set on Takeo as she thinks that Gouda-san is a nice guy. But anyways, I think I’ll blog this show in the future because it’s so damn good! Props to Madhouse on adapting Ore Monogatari!! 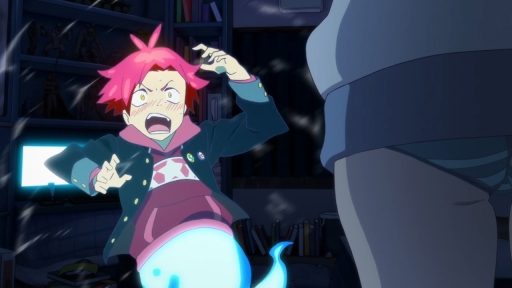 Here’s an anime series airing in Noitamina. Not only that, this is the first time I’m watching a MAPPA anime show as it has eye-popping visuals judging from my first impression for Punch Line.

The story meanwhile is kinda ridiculous. For one, the main character Yuuta Iridatsu is being booted out from his body and he must find a book to get back again. However, Yuuta must not see panties too much or he’ll destroy humanity!

Yup, it’s ridiculous, but it’s a good thing as Punch Line has the potential to be a good comedy series! Just hope that MAPPA won’t turn it stale in future episodes…

And now, I’ll be finishing up this post with Re-Kan! as it has a nice premise. By the way, this is not a Manga Time Kirara title even though Houbunsha published the manga.

Anyway, the plot is off to a rough start as Hibiki Amami is befriending Narumi Inoue. However, Hibiki can see and talk to ghosts which scared Narumi-chan a lot. As for the animation, it seems that it’s not the best coming from Studio Pierrot+ as the quality is a mixed-bag. Maybe in future episodes, they’ll move the plot around and fix the quality a bit.

But that’s about it for the rest of the field this Spring 2015! Now then, I’ll have to wait for Grisaia and Ninja Slayer. Oh and as for Nanoha ViVid, I’m gonna blog it so don’t worry…