Well, I take back what I said last time as we’re still at Yuuji Kazami’s backstory, where he finally made love to his master Asako Kusakabe.

Yes, Yuuji has finally became a man thanks to Asako and I’m sure that he’s ready to pick up girls…

And what a good way to test his skills is to have sex with a drunk Julia Bardera. And by the way, JB is a virgin! 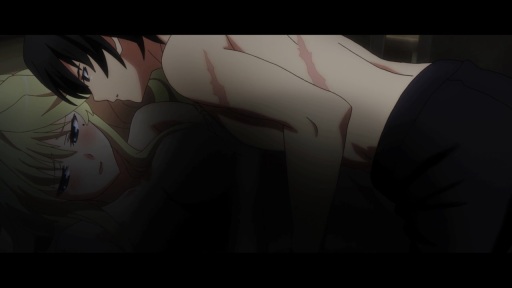 Not anymore though as she got laid by Yuuji-kun. Sooner or later, he’ll get a harem at Mihama Academy and also please don’t mind about the censorship!

Now let’s continue Yuuji’s backstory as Asako’s health is getting worse. So much that she can’t work to her fullest, that Asako Kusakabe was subbed by her student Yuuji during an urgent mission.

Thanks to Yuuji’s effort as a substitute, he has decided to follow his master’s footsteps on becoming a counter-terrorist agent at CIRS.

And with that, he begins his proper military training in the United States, joining the US Marine Corps as a recruit. Expect him doing harsh training and getting yelled by his superiors, all while wearing a straight face and making snarky comments!

He’ll also meet his eventual war buddies like Daniel Born and Milliela Stanfield. Both of them will be killed in action, but let’s not jump to conclusions okay?

Oh, and don’t forget this otaku soldier whose name is not yet revealed. Please sir, play your eroge while wearing earphones or you’ll get bullied!

Anyways, I guess the next episode will continue Yuuji’s backstory. Personally, 8-bit should have included more of his backstory in the Labyrinthe special instead of continuing off in Eden!