And damn, seems that Amane is pretty much crying in joy. Time to hug your best buddy from the basketball club… very tightly!

Oh look, it’s Yuuji’s former squad leader Justin Mikemeyer as he joined the ride towards “eden” together with Julia Bardera, Milliela Stanfield, Chizuru Tachibana, everyone who is important to Yuuji’s life… and they’re on-board in a WW2-era submarine! (It’s a replica by the way, but it doesn’t matter now.)

By the way, the “eden” that I mentioned a while ago is actually an island bought by Asako Kusakabe. And one more thing, Robert Wallson aka James Okada won’t be joining as he’s busy playing eroge at his ramen shop…

Instead, James’ wife Zoey Graham will join the ride instead. Oh yeah, and she has a grudge on Yuuji because her father Paul Graham was killed by him.

You know what, put that gun down as Yuuji suffered too much grief on his life! 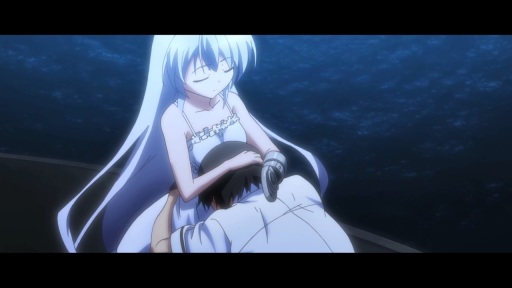 Speaking of Yuuji, he’s delighted to see his sister again but he’s somewhat angry at her for abandoning him. But you know what, there’s one thing that’ll solve anything… And that’s sex!

C’mon, this show has fulfilled the prophecy of having incest since the Labyrinthe special was shown. Of course, Yuuji fucked Asako first!

But it doesn’t matter now as Yuuji made love with her sister right after crying over her chest… Oh, and he’s planning to take Heath Oslo down by himself!

So anyways, next episode is the final showdown between Yuuji Kazami and Heath Oslo. And while we’re at it, the girls are planning to destroy the Thanatos system once and for all!

By the way, seems that Michiru Matsushima made a bold move by kissing Yuuji to the lips. Of course, it’s her alter-ego that made this daring move!

Speaking of Mr. Oslo, he’s ready to welcome his former protege with open arms… and a stab in the rear if you know what I mean! I’ll be very shocked if Heath Oslo ravished Yuuji’s dead body right after extracting his genes for cloning purposes.

One last thing, it was revealed that he’s the one who shot Asako Kusakabe which her health deteriorate because of it. Now there’s more reason for Yuuji to kill his former sadistic master!