Well guys and girls, it’s the finale of Highschool DxD BorN! While Issei is forced to fight Rias-sempai…

…he doesn’t want to accidentally kill her. Um, you should think of another way to snap the club president back to her senses! 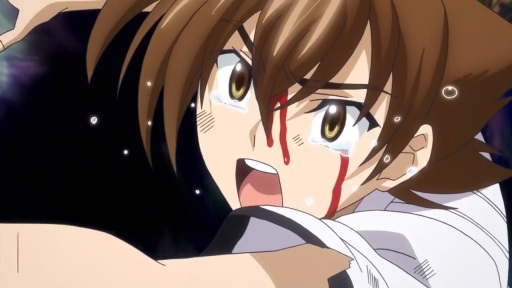 C’mon Issei, why don’t you reach the president by telling her name. Not Rias-buchou, just Rias!

See, telling her first name will do the trick. But yes, Rias-sempai is freed from Loki’s curse and Issei did a good job on snapping to her senses!

Now all they need is to destroy the curse and return to their world. By the way, I’m disappointed that Loki decided to seal himself after putting a curse on both Rias and Issei. Asshole Norse god!

In any case, Issei needs to destroy his doppelganger. However, that fake Issei just got transformed into Juggernaut Drive… 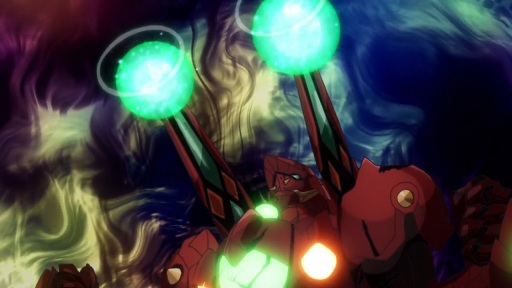 So, the real Issei got a new toy to use on this occasion. You may thank Ajuka Beelzebub for doing adjustments on the previous episode.

But yes, the impostor has been defeated thanks to Issei’s new attack. Honestly, his new form reminds me of Gundam Double X thanks to his twin cannons! 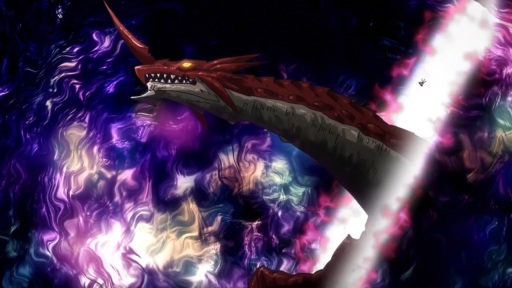 …where they can spend their intimate time together as if it was a dream. Speaking of dreams, only Rias-sempai knows what happened after beating the impostor, so sorry Issei-kun for being left out.

I guess that he’s not yet ready to notice and accept Rias-sempai’s true feelings! But what’s important right now is that they returned to the human world and Ragnarok was stopped for odd reasons.

Meanwhile, Vali was impressed that Issei made it out alive from the Dimensional Gap. Heck, so was Azazel-sensei in regards to the future harem king’s latest exploits! Sadly though, I’m disappointed that Loki’s ass wasn’t kicked!

Speaking of disappointments, Highschool DxD BorN is a step-down from previous seasons. Sure that it has some great moments like the Diodora’s beatdown from Ep. 8 and the Juggernaut Drive from Ep. 9, but I’m upset on happened in HS DxD Born like Akeno’s relationship with Baraqiel being resolved quickly, as well as Loki who did most of the damage early on the show as a major antagonist but he went into hiding after Ep. 10.

Oh yeah, as for the last 3 episodes, it’s a mixed bag that viewers’ opinions are divided. While I like how Issei reached out a brainwashed Rias-sempai even if it means fighting her, I feel that TNK should lessen their usage of scenes from previous seasons if they want to insert a battle against Loki.

In the end though, I enjoyed watching Highschool DxD BorN even though I wanted more on this season!

Anyways, I’m gonna end this post as Rossweisse joined Rias’ peerage as her second rook as well as becoming a civics teacher at Kuoh Academy.

Looks like she’s not gonna get gloomy anymore now that Rossweisse has company in the form of Occult Research Club. Still, she can’t get a boyfriend though…

And one more thing, here’s Issei-kun and Asia as the competed in the three-legged race and won. Great job for both of them!

Well then, it’s time to say goodbye for the Occult Research Club. While there would be an OVA episode coming up before the end of this year, it’s time for me to hit the books!