Michiru, it’s your fault for kissing Yuuji when everyone is watching. Now, you’re going to cut wires at the bottom of the sea as punishment. Oh, and you want to pee? Just do it already, but your suit would get smelly!

Anyways, it’s the definite conclusion to this crazy series called Grisaia. While the girls are busy sabotaging the Thanatos System…

…Yuuji Kazami is busy storming into Oslo’s mobile hideout. Oh, and Yuuji will have to face his clone where he’s delighted to see the original one!

Of course, the Du Pont guy wants the original to fight on an equal footing, so he injects Yuuji with booster drugs ’cause why not!

But you know, injecting Yuuji with drugs will bite that clone in the ass!

And so, Yuuji’s clone was stabbed and left to die. All that is left is none other than Heath Oslo!

See, Yuuji’s former master is ready to take his student on. Unfortunately, Yuuji is too tired to fight!

Look how Yuuji has cuts and bruises on his body, I think he should have stack up with more booster drugs before taking on Mr. Oslo.

But then again, even drugs couldn’t heal wounds and recover lost energy…

So therefore, Yuuji was killed by Mr. Oslo. So much for his amazing run! 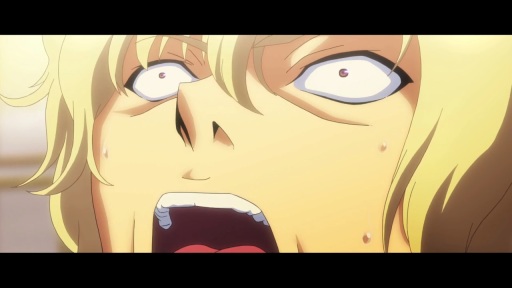 Oh wait, guess not as Yuuji-kun has enough strength to lift a ballpen and stab Heath Oslo in the nape.

Sorry Mr. Oslo, but it seems that your student has won against you! See you in hell then…

Anyways, mission accomplished for Yuuji Kazami. Sadly though, he’s gonna die here together with Mr. Oslo since he finished his duty…

Nah, as if he’s gonna join with Asako early… Might as well stay on an island together with the girls and have a peaceful life. C’mon, Yuuji only lives once!

But yes, Yuuji survived and he’s now a free man. Oh, and let’s not forget that he’s a lucky bastard because Yuuji is surrounded with girls like Amane, Michiru, JB, and Kazuki!

And so, the story of Grisaia has ended as Yuuji Kazami and the girls reached Eden. A great conclusion to this gritty, but wonderful tale…

Kudos to 8-bit for job well done on making improvements after Le Fruit de la Grisaia, even though they have to extend the backstory from Labyrinthe onto Eden. But if you want a full experience, might as well play the visual novel trilogy.

And now, I leave you with a nice picture of the gang. I mean, they deserved a happy ending!