Today’s episode, the School Living Club are doing treasure-hunting… at night! And while Yuki found useless things like stuffed toys and a sleeping bag, just hoping that they won’t encounter a certain zombie teacher.

On the other hand, I was wondering why Megurigaoka High School has so much solar panels, a vegetable patch, and a rain water collector? Let’s find that out…

…as Yuuri Wakasa used the key to open up a box that was hidden in a secret compartment.

And when she open the box which contain a DVD and other documents, Rii-san found something disturbing that she discussed it together with Mii-kun and Kurumi. 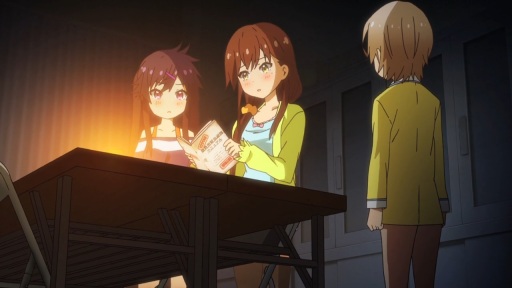 It turns out that Megurigaoka High School was built to preserve humanity should a biological weapon testing gone horribly wrong.

Anyways, looks like the girls are involved in a conspiracy. But wait, should they protect Yuki from zombies so I wonder where is she?

Oh great… This can’t be good for Yuki Takeya ’cause she might encounter a zombie, probably Megu-nee on the next episode. Let’s hope that Yuki won’t find that!