Posted on September 6, 2015 by benigmatica

Remember this guy from last season? Well, Dr. Ver has returned and still claimed to be a hero, even though he almost destroyed Earth with his loony plans!

Fuck this crazy doctor, and now he joined forces with Carol Malus Dienheim! 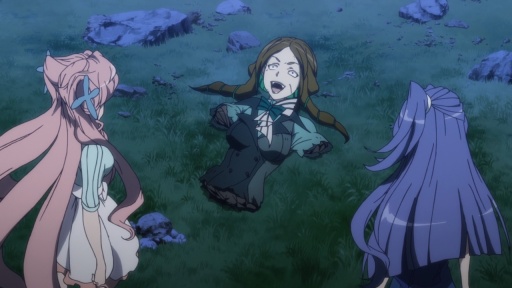 On the other hand, looks like Phara Suyuf is still functioning after being cut down by Tsubasa Kazanari, telling both Tsubasa and Maria that being defeated is all part of Carol’s plan.

Oh yeah, and she tells them that Carol is using Elfnein to get one step ahead of the Symphogear users, ranging from leaking information to Carol and the Auto-Scorers to using Dainsleif’s curse as a means of achieving her plan of dissecting the world.

In short, what was once a power-up for the Symphogear users turned out to be beneficial on speeding up the Earth’s destruction by defeating Auto-Scorers.

And yes, that revelation shocked Elfnein as she’s being used all along. Carol, that bitchy loli alchemist!

Speaking of Carol, she’s getting out of here together with Dr. Ver. I have a bad feeling that she’ll use Nephilim implanted onto that crazy doctor as a replacement for the broken relic Yantra Sarvasva.

Of course, Chris Yukine won’t let them get away that easily as she charges into the enemy.

But then, there’s Leiur Darahim as she stop Chris in its tracks. By the time Leiur attacks Chris, both Carol and Dr. Ver escaped!

On the other hand, seems that Chris is kinda hot-headed lately because she sees both Kirika and Shirabe as a burden. Just kidding, seems that she couldn’t save both of her juniors by herself!

But it’s not like both Shirabe and Kirika are dead weight though, as they can still fight and saved Chris-sempai from Leiur’s final blow!

Honestly, Chris should do teamwork for once instead of going solo and moping about her past sins!

So with that said, Chris Yukine powered up and shove a giant missile onto Leiur’s face. Um wait, where’s the teamwork anyway?

Oh, so she used Kirika to lure her away from the explosion. Even though it was an awesome fight, the teamwork they showed is somewhat disappointing.

Also, Chris did a nice job on killing that last Auto-Scorer, as the dissection of Earth is no irreversible. What an idiot! *facepalm*

But anyways, Chris and her juniors safely returned to SONG’s super-submarine. But even though she defeated Leiur Darahim, there’s one thing missing…

And that’s Leiur’s golem as it destroyed the sub in half! Fuck, why it has to be like this!?

On the other hand, Hibiki got back on her feet as she decides to talk to her estranged father once more.

Too bad though as Genjuro and his staff are most likely dead. Damn you Carol Malus Dienheim and Dr. Ver!