This post is brought you by Yoshinoya-sensei. Actually, the reason why I chose this picture is because Miyu Matsuki passed away on October 27, 2015 which is then followed by the announcement of her passing on November 2, 2015. I’m sure gonna miss her voice who gave life to not only Yoshinoya-sensei, but Isumi Saginomiya and Anna Nishikinomiya.

Meanwhile, I’m not gonna watch the Shingeki no Kyojin junior high spin-off for the time being. I might finish watching that series, but not at this time. 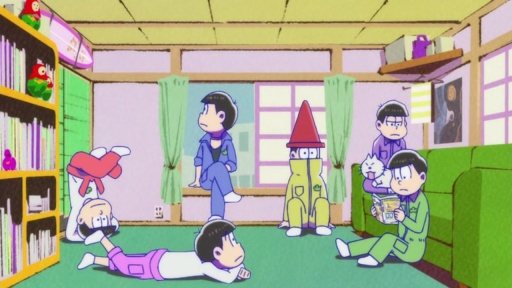 Let’s start with Osomatsu-san where I feel that this revival series won’t succeed for modern audience… at first. However, it turns out that it’s becoming popular thanks to the likes of Takahiro Sakurai, Hiroshi Kamiya, and Daisuke Ono voicing one of the Matsuno siblings.

Seriously, they did a great job on voicing the sextuplets together with Miyu Irino, Yuuichi Nakamura, and Jun Fukuyama. Oh, and having great moments such as Ichimatsu’s interaction with his esper cat back in Ep. 5, Iyami’s hilarious rise and fall during Ep. 6, and the interview scene from Ep. 4 did help the show’s popularity apart from showing parodies and shout-outs.

Speaking of parodies, Osomatsu-san was hit by controversy as the original first episode will be pulled out and it’ll be replaced with a brand-new episode due to good’ol copyright infringement. On the other hand, Osomatsu-san will have another cour coming up in January 2016.

Next up is Rakudai Kishi no Cavalry where things got interesting now that both Ikki Kurogane and Stella Vermillion became an official couple, something that Ikki’s sister Shizuku refused to accept it because she’s similar to Miyuki Shiba in terms of obsession over her “Onii-sama!”

Anyways, the road of the “Another One” (which Ikki was formerly called the “Worst One”) will be tougher as Ikki must face the likes of Ayase Ayatsuji and Kuraudo Kurashiki, as well as the wrath of the Kurogane family who will do anything to bring Ikki down. Seriously, it’s getting worse from now on!

And finally, I’m gonna wrap this post up with Iron-Blooded Orphans where Orga Itsuka, Mikazuki Augus, and the rest of the CGS Third Group (now call themselves as Tekkadan) are heading towards Earth so that Kudelia Aina Bernstein can work it out there in regards to Mars’ independence. Of course, given that both Orga and Mikazuki have a somewhat toxic relationship, this might not end well for both of them as Orga tries to do great things for Mikazuki.

As for the series itself, I’m impressed that Tatsuyuki Nagai and Mari Okada did better after the first episode. I hope that they can continue the hype heading towards the halfway point, as Iron-Blooded Orphans could be one of the best Gundam series after last year’s disappointment that is Reconguista in G and Build Fighters Try.