This is Itsuki Isozaki, one of the teachers from Meisei High School who has a hobby of taking pictures of plants and owning various cacti plants at his apartment.

Of course, the reason why he does this is because Isozaki-sensei wants to forget the time when his student Futaba Nishizawa went missing. And now, Futaba’s friends named Hitoe Madoka suddenly vanished! 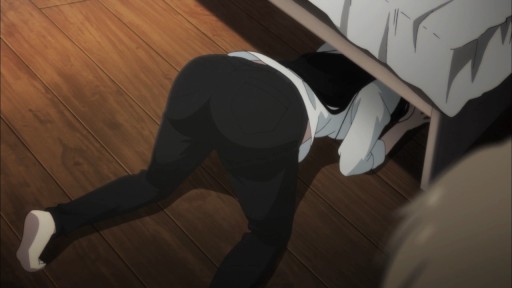 Luckily, Sakurako Kujou and her assistant Shoutarou Tatewaki are there to help Isozaki-sensei.

Although they found nothing when Sakurako-san and Shoutarou visited Hitoe’s house, they found a clue at Minami Tsutsumi’s apartment.

In any case, Sakurako-san found a painting that was made by a mysterious painter named Hanabusa-san. Said painter happened to be the creator of a certain toxic landscape artwork from Episode 5.

Yeah, this could be ugly as it turns out that Hanabusa-san used Minami Tsutsumi as his model for this portrait artwork. On the other hand, seems that this painter has a thing for butterflies, specifically the Lethe diana.

Speaking of Minami Tsutsumi, they found her at the restaurant, feeling anemic due to lack of sleep and nutrition.

So while Sakurako-san allowed Minami to stay at her mansion, I’m worried that she might do something stupid that’ll cost her life dearly.

There’s two more episodes to go and the suspense is killing me!