Here’s the first servant of Kiss-Shot or Shinobu Oshino, who told Araragi-kun to break off with Shinobu as he wanted to apologize and restart their relationship once more.

Then again, this young vampire who has Koyomi’s voice wanted nothing more than getting his Kokoro-Watari back. Just kidding, seems that Shinobu’s first servant decides to throw away his vengeance as he wanted to be with his master forever… and for reals this time!

Unfortunately, their conversation was interrupted when someone threw a cross onto the first servant! Yikes, I wonder who did this?

Why it’s none other than Mr. Episode. Damn, it’s been a long time since I saw you back in Nekomonogatari: Shiro!

What brings you here anyway apart from interrupting their conversation by throwing a cross onto them? Oh wait, he’s just ruining their time!

And by the way, he brought Izuko Gaen too! But you know what, seems that the first minion of Heart-Under-Blade wasn’t pleased on their intrusion.

So therefore, he decides to settle matters with Araragi-kun to a duel instead! Well, that’s sucks for Koyomin… 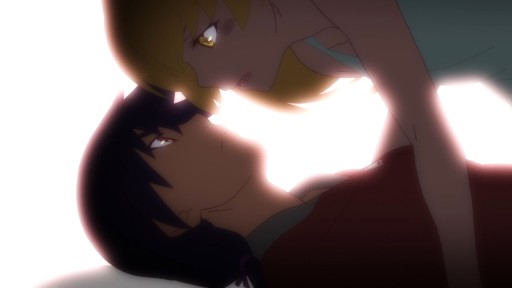 Meanwhile, both Suruga and Shinobu are arguing on whether the cute vampire should meet her first servant or not. And in the end, seems that Shinobu got emotionally hurt after hearing Suruga’s speech.

C’mon, having Shinobu not meeting her first servant was pretty much dodging her responsibility. If you want to settle matters with her servants, she should do it by herself!

Then again, seems that she won’t confront her first servant as Shinobu went to sleep inside the ruined temple, leaving Koyomi Araragi settling matters with his own hands. Well everyone, I’ll see ya on the final episode!