This is Orochi and Miss Watery, two top-ranked officials from Valhalla who are tasked to capture Kiseki Kusanagi, who was revealed that female members of the Kusanagi family are cursed that they should be killed immediately. On the other hand, Miss Watery resembles Kanaria for some reason.

Unfortunately for Kiseki, her demonic powers is stronger that she’s immortal. Therefore, Kiseki begged Takeru to kill her. For now, Kiseki is under her brother’s care, but they’ll encounter crazy inquisitors and terrorists like Valhalla…

Case in point, one inquisitor named Kyouya Kirigaya is here to kill Kiseki as he wants to take revenge for Akira Yoshimizu’s death back in Episode 4.

Yeah, convincing him to drop his weapon won’t do much as Kyouya is dead set on killing all heretics, even if he’ll point his gun at Takeru-kun!

Speaking of Akira Yoshimizu, she’s standing beside Kyouya Kirigaya except that she’s not the real Yoshimizu…

Instead, her real identity is Kyouya’s personal Relic Eater named Nero. As you can see, Kyouya is using Nero’s power to murder all heretics including Takeru Kusanagi.

Honestly, this guy is a lunatic and Kyouya shouldn’t surrender his humanity to carry his revenge! On the other hand, he shouldn’t have a Relic Eater at all!

Anyways, Kiseki Kusanagi’s adventure is over as she was captured and placed under Sougetsu’s care.

As for Takeru, he was put behind bars to cool himself off together with Ouka Ohtori. By the way, seems that Ouka wasn’t hostile as she used to be after joining the 35th Test Platoon.

But anyway, it’s sucks that both of them are in jail and it’s gonna get worse as Valhalla makes their move on Kiseki Kusanagi when she is transported to another facility.

And to make matters worse, you have Kyouya Kirigaya as he’s gonna kill Takeru’s sister even though Kiseki couldn’t die!

Also, would it be better if Hayato Kurogane take the wheel on escorting Kiseki instead of this lunatic? But no, he’s busy fighting against one of the head honcho from Valhalla!

But don’t worry though as Takeru just made Kyouya explode by using his sword skills! Well that takes care of that lunatic… or is it!

No matter if Kyouya Kirigaya is alive or not, I don’t even care about this revenge-obsessed inquisitor since he wasn’t fully-developed as a character.

In any case, Takeru-kun finally rescued his sister Kiseki after fighting Kyouya.

Of course, it’s not yet over as he needs to suppress her powers fast or he might resort to killing Kiseki as she wished for it! Unfortunately, there’s a certain person who will ruin their time… 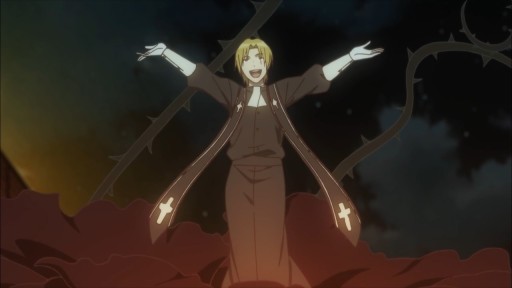 That certain person is Haunted as he’s here to capture Kiseki and use her demonic powers for the evulz!

God, what dastardly plan would he do on this penultimate episode?

Oh shit, did he just impale Takeru-kun?! Fuck, I knew that Haunted would cause trouble as Kiseki’s powers would go out of control upon seeing her brother in this state!

Anyways, next week’s episode would be a total train-wreck!