Well, it seems that Kurogane’s fight against Orochi came to an abrupt end as the worst-case scenario has happened on this city. Thanks to Haunted however…

…that Kiseki went on a rampage as she saw her brother Takeru impaled by one of Haunted’s thorns!

As you can see, Kiseki’s abomination is devouring everything including soldiers who can’t do anything to kill it.

On the other hand, there’s a new character introduced named Suzaku Suginami, who is interested in Kiseki Kusanagi for a long time. Then again, she should have been introduced during Ikaruga’s story arc.

Anyways, she make a bet with Sougetsu Ohtori on whether Takeru Kusanagi can kill his sister or not. While it’s inevitable that Takeru-kun would resort on slaying his sister, seeing Suzaku having a conversation with Sougetsu is somewhat of a bad omen!

But let’s move onto the scene where Ouka Ohtori will try to put Haunted down.

And while she was stabbed by that asshole priest with his Dainsleif, Vlad the Impaler healed her wounds but it seems that Ouka has no choice but to make a contract with her Relic Eater!

Yup, she resigned her humanity so that Ouka can save her friends and Kiseki-chan.

And unlike some other Relic Eater wielders like Kyouya, Ouka wasn’t consumed by revenge so it’s okay for her to don the armor of Vlad the Impaler… Well, the skimpy version of it! 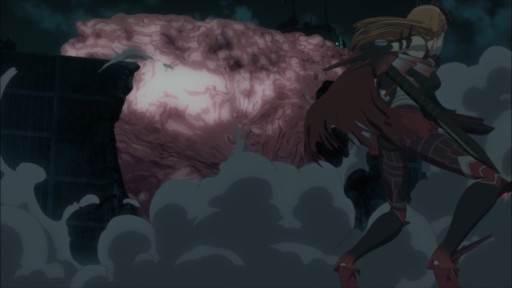 So with that said, she defeated Haunted with her hallmark magic, which he was sent flying towards his doom when Haunted was eaten by Kiseki’s cursed demons!

Yeah, that would take care of that bastard but I have a feeling that Haunted won’t go down easily…

Meanwhile, here’s Takeru Kusanagi as he’s recovering after being impaled by Haunted. While he’s unconscious, Takeru would wake up eventually…

…when Lapis Lazuli questioned him on whether to give up his humanity or not for the final time.

Naturally, Takeru decides to give up being a human and that’s where Lapis kissed him!

Yeah, it’s a last-resort effort by Takeru-kun as he might kill Kiseki to stop her demonic abominations from spreading further.

Also, he told the rest of the 35th Test Platoon to stay away from him as Takeru might slaughter them if they’re not careful. After all, Takeru sold himself to Lapis Lazuli.

Now let’s move onto the climax where Takeru will have to face Haunted once again and save Kiseki from going insane with her cursed powers.

Yeah Takeru-kun, good luck on beating the shit out of Haunted ’cause he’s not only a troll but a monster too!

Oh, and while Haunted managed to break off Takeru’s helmet, he wasn’t fazed by it and moves forward…

…delivering the final blow against the ace warlock/asshole priest. Well, it’s good riddance to Haunted for being a dick!

And look, Takeru saved Kiseki but I don’t think that’s permanent as her curse might come back stronger as ever!

But that’s about it for Anti-Magic Academy as it ended happily ever after, although it could be actually worse than I thought it would be. You see, SILVER LINK. made an anime-original ending for this adaptation just to be safe as sticking with the novels might put Anti-Magic Academy into shit-tier like Magical Warfare, especially when it might end on a cliffhanger.

But you know what, would it be better if they adapted Anti-Magic Academy “The 35th Test Platoon” into a two-cour anime series while putting their other two anime series like Rakudai Kishi no Cavalry and/or Shomin Sample onto January or July 2016, respectively. I mean, they adapted it in breakneck speed while leaving cutting some of the important content…

One example is Kyouya Kirigaya who wasn’t developed as a character and he’s simply an obstacle to Takeru Kusanagi.

While he survived, the fact that having him acquiring a Relic Eater wasn’t explained properly.

Also, there’s Orochi who was revealed that not only he’s taking care of Kanaria, but Orochi is actually part of the Kusanagi family.

Seriously, SILVER LINK should have made it into a two-cour series but there’s nothing we can do. 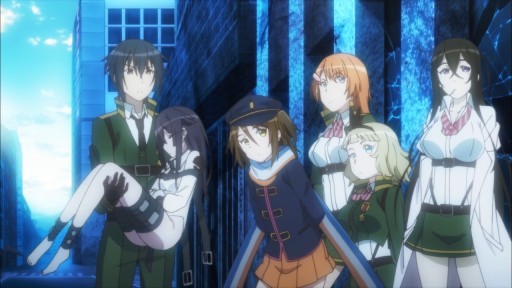