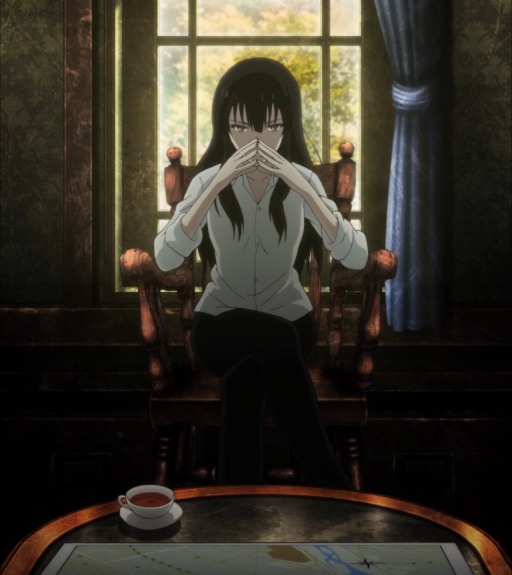 Ladies and gentlemen, this is the finale of this series where Sakurako-san will confront her nemesis Hanabusa-san.

Unfortunate, TROYCA decides to end this series with an origin episode on how Shoutarou Tatewaki met her two years ago…

And let’s start things off with Shoutarou-kun being involved in a murder case that was left cold many decades ago.

As you can see, he’s somewhat scared back then, especially when Shoutarou finds human remains together with Sakurako-san. But now, he got used to it instead of being in panic most of the time!

So as for the remains, it was revealed that a old lady named Hatsue Yachi who have gone senile after she buried her father.

While there’s no clear indication on how her father died, it seems that there’s no point on prosecuting Yachi-san as she’s too old. Thus, the case will remain cold until Hatsue Yachi passed away.

Now let’s move onto the present where Shoutarou finally found Sakurako-san, telling her that he’ll face many difficulties as Kujou’s assistant even if Tatewaki will face Hanabusa-san eventually.

I mean, he can defend himself as seen in Episode 2 and Shoutarou will do just fine!

Of course, if he’s in grave danger especially when being caught in one of Hanabusa’s mind games, there’s Sakurako-san to help Shoutarou out.

C’mon, Sakurako treated Shoutarou like a little brother and she still does!

In any case, I’m glad that they’re reunited but I wanted more as Hanabusa-san is on the loose, manipulating people until they’re dead by “accident”.

As for the series itself, glad that TROYCA did a great job on adapting the novel series. Should it fair better when it comes to Blu-ray sales, they might make another season of Sakurako-san no Ashimoto ni wa Shitai ga Umatteiru.

With that said, it’s time to say farewell to both Sakurako Kujou and Shoutarou Tatewaki!