Posted on January 8, 2016 by benigmatica 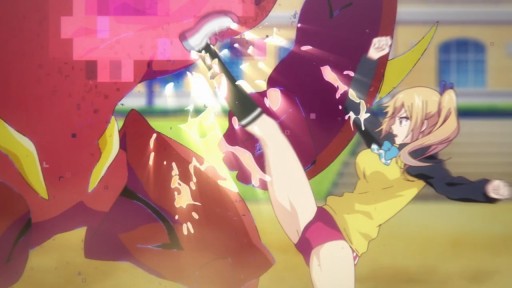 As you can see, you have this character named Mai Kawakami who is fighting a Phantom, beings that only existed in fantasies until an accident happened where a virus spread across Japan.

So while the virus affects the brain that not only sees supernatural beings, but it produces powers as well.

Apart from Mai, there’s Haruhiko Ichijou who can seal Phantoms by drawing them onto his sketchbook. While he sometimes throw random trivia during battles, Haruhiko is somewhat useless without a spare sketchbook on hand.

In any case, Phantom-busting is serious business and both Haruhiko and Mai-cchi are at the bottom of the rankings.

That’s until Haruhiko found a girl named Reina Izumi where on the surface, she’s a normal sweet-looking girl…

…until Reina opened her mouth, inhaling most of the Phantoms to her stomach. Yeah, I have to say that she’s more useful than Ichijou.

Then again, Haruhiko is the main character of this anime so he’s useful in some areas! 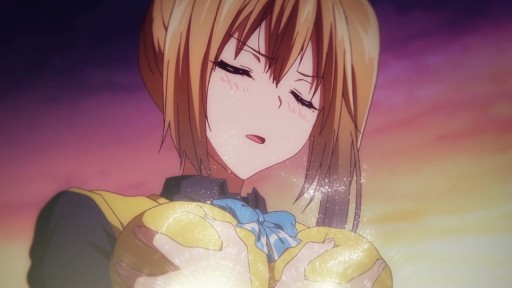 On the other hand, let’s talk about Mai Kawakami as she’s frustrated on being dead-last together with Haruhiko. Don’t worry, Mai-cchi will have Reina at her side!

While she’s excited on having another teammate, seems that Mai gropes her own tits for some odd reason. Sure that she’s channeling her energy, but I feel that Mai-cchi is somewhat a narcissist!

Then again, her huge rack has some obvious disadvantage as Mai’s boobies could clip on a rope filled with electricity.

But you know what, have Mai-cchi just bounce her tits with the right timing, just to clear this limbo of death and put those Phantoms in the afterlife!

And that’s the first episode of Musaigen no Phantom World. Will this anime adaptation by Kyoto Animation would become another hit just like Sound! Euphonium? We’ll find out on the next episode!