Oh Hanekawa-san, your face is too close towards me!

So I was bored as the 2015 Anime Season is reaching its climax and I was thinking of covering another Monogatari Series anime.

And thus, I found one where I’ll watch and blog it on a whim. This show is called Koyomimonogatari!

Anyways, this short anime series is all about Koyomi Araragi who do something on a whim like investigating a stone shrine together with Tsubasa Hanekawa.

Some say that there was an oddity inside the shrine…

But when Araragi paid a visit to Meme Oshino, he told Koyomi to don’t bother by it. That wasn’t a nice answer there!

It turns out that Araragi erected the stone shrine due to a failed woodcraft project. Of course, this is one of Koyomi’s acts that he made on the spur of the moment…

One example was Koyomi climbing towards the rooftop of Naoetsu High and putting a bouquet of flowers there, which Hitagi Senjougahara got curious of it!

Fortunately, Araragi-kun didn’t fall into the ground when he climbed to the rooftop and told Senjougahara the truth about it. Well, I have to say that his actions from Episodes 1 and 2 were mind-blowing!

But now let’s move to some trivial episodes where you have Mayoi Hachikuji found a strange sand pattern at the park.

For some reason, seeing Araragi-kun getting his face stomped by Hachikuji turns him on!

Anyways, the sandbox formed a demon face after Koyomi checked it out. However, it turns out that the bottom surface of the sandbox got a gaping hole that sand is pouring out of it, hence having that demon face.

Good thing Araragi-kun told it to the park officials ’cause it’ll be a problem if children stepped onto the sandbox!

Finally, here’s Suruga Kanbaru as while she’s dressed up as a prince, Kanbaru told Araragi-sempai that there was a superstition of her father seeing an image of her mother when bathing at the tub.

This in turn telling him to see his fated partner on the water surface. 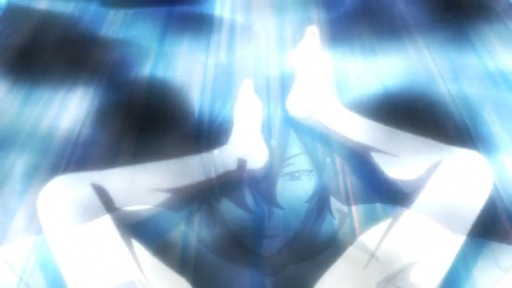 Unfortunately for Suruga, the only thing that Koyomi saw was his own reflection. But you know what, it could be a rare occurrence of Suruga’s father witnessing his future wife through the water surface.

In any case, that’s about it for Episodes 1 to 4 as I’ll play catch-up for Koyomimonogatari. Just remember that I watch this show on a whim!