Hey everyone, here’s Shinobu Oshino doing an Ultraman-esque pose to open up this post. How cute!

However, it’s even cuter when she eats donuts made from Senjougahara.

Oh, and got serious about it when Shinobu-chan challenged Koyomi Araragi on finding the 4 remaining donuts. Yeah, that escalated quite a bit!

So here it is, the last 4 episodes of Koyomimonogatari and here’s Tsubasa Hanekawa in her bikini as she traveled across the globe. How nice of her!

Oh yeah and while Ononoki is carrying Araragi-kun with only her index finger, she asks him how much his remaining time in this world.

Then again, considering that he might lose his vampiric powers at some point, Koyomi’s lifespan might have trickled down a bit so he might live in his 50’s or 60’s.

One more thing, it turns out that Yotsugi Ononoki wasn’t searching for something as she’s playing Koyomi Araragi the whole time!

Also, seems that Yozuru Kagenui will have her chance to beat the shit out of Koyomi should he lost his powers.

Damn, that knee from Kagenui-san got him pretty hard!

Oh and unlike before, no one is gonna help Araragi-kun out of this mess, so don’t expect for Shinobu Oshino to rescue him just like in Nisemonogatari.

So with that said, Kagenui told him that one clean hit is needed to beat her. But just as Araragi-kun is ready to defeat Kagenui…

…she was gone after going up at the ruins of North Shirahebi Shrine. However, Koyomi met a familiar person instead of Yozuru Kagenui.

That person is none other than Izuko Gaen. Anyways, Izuko told Koyomin that the town he’s residing has no guardian to protect it from oddities and thus she took it upon herself.

Basically, Izuko blamed Koyomin for not doing his duties to stop oddities within this town. 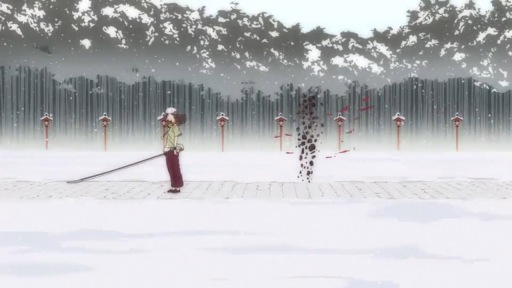 So, she decides to kill Araragi-kun outright with a replica of Kokoro-Watari and no one is gonna hear him scream. WHAT. THE. FUCK!?

Dammit, this can’t be happening for Koyomi Araragi! I mean, he has a bright future ahead…

…especially for his girlfriend Hitagi Senjougahara. If she got a hold of the news that Araragi-kun is dead, Senjougahara is gonna get pretty mad!

Gotta say that Koyomimonogatari ends with a shocking twist! So much for watching this short anime series on a whim.