This is Episode 4 and I’ll introduce you to Lord Heinz Nerich Windermere, the Kingdom of the Wind figurehead and the main cause of the Var Syndrome in the first place. Also, Lord Heinz is Keith’s younger brother (or sister), meaning that both of them are pure-blooded Windermereans.

But honestly, Lord Heinz shouldn’t sing at all as his (or her) voice made everyone go berserk and kill each other. Not only that, but Lord Heinz is losing his (or her) vitality when singing. Come to think of it, having a short lifespan for the Windermereans is such a cruel fate to have! 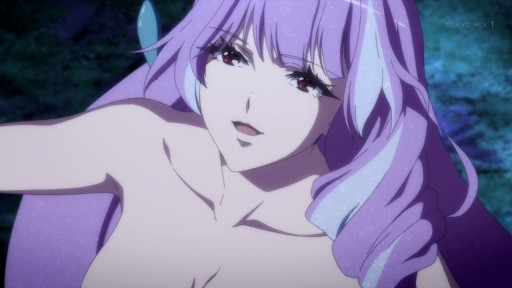 Meanwhile, here’s Mikumo Guynemer and while she’s a mystery, the fact that she wants to speed-up Freyja Wion’s growth on becoming a more-confident idol is a worrying sign.

Let’s hope that Mikumo won’t go up in the big stadium in the sky ’cause JUNNA (the singing voice of Mikumo Guynemer) got a bright future ahead after this show. Please don’t kill the star of Walkure, Kawamori-san!

Now then, let’s move onto brighter things as Freyja Wion makes her shaky debut as a member of Walkure. While she’s a bit clumsy at first as well as her lifespan issues, I feel that Freyja would get the hang of it in the future!

By the way, Freyja Wion once said that she got a music player from someone who loves music. It contained the best musician assembled such as the legendary Lynn Minmay, Fire Bomber, Sheryl Nome and Ranka Lee, and finally Walkure.

Meanwhile for Hayate Immelman, his debut at the Delta Squadron went smoothly albeit doing some impromptu dancing along the way!

See, he’s feeling the music especially when Freyja takes the stage. However, the concert will soon be interrupted…

…when the New United Nations Spacy attacked both Walkure and the Delta Squadron. Oh yeah, and they’re affected by the Var Syndrome as always!

Fortunately, Mikumo Guynemer and the rest of Walkure can stop the Var Syndrome with the power of their voice. Of course, they’ll have to be direct in order to stop the hate plague!

While Walkure has managed to stop the Var Syndrome, it’s not over yet though…

…as the Aerial Knights- Or should I say the Windermere Kingdom declared war on the New United Nations under the flag of the Brisingr Alliance. Man, that escalated quickly but I’m questioning why Lord Roid Brehm decided to take on the mighty NUNS? They could just negotiate, but no they want bloodshed because their life is short!

Anyways, onto the next episode and I have a feeling that the Walkure fans would suspect of Freyja of being the enemy because she’s a Windermerean!