Woah Yoshitsune Hiiragi, don’t take your anger on Eiji Hoshimiya just because he failed to get Kuroko Shirabyoushi or Kamimusubi!

On the other hand, there’s a reason why Hiiragi is venting his frustration at Eiji.

You see, Yoshitsune Hiiragi was once a colleague of Gennai Hoshimiya. That’s right, Eiji’s father!

Anyways, the reason why Hiiragi is angry at Eiji’s father is because Gennai used his technology called Volition Energy CONverter Coil in order to create his masterpiece: Desire Accessible Information SYstem.

Also known as Daisy in which she grants wishes thanks to Hiiragi’s research where people’s will is converted into energy. Hence, Daisy grants Eiji’s wish of total destruction and that’s how this series started its downward spiral!

Come to think of it, did Kadokawa told Asread to speed the adaptation up? I mean, covering the whole chunk of Big Order into a 10-episode anime series will spark a disaster. Oh wait, it already is and now I’m waiting for a massive backstab to the protagonist! 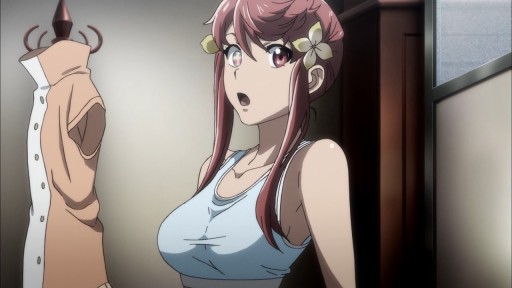 Meanwhile, here’s Rin Kurenai and unfortunately for her, she’ll do some babysitting work for a special guest…

…because somebody kidnapped Sena Hoshimiya! Said kidnapped happened to be Abraham Louis Franc where he’s in cahoots with Hanzo Hattori and the Public Safety Division 6.

Yeah, that bastard is at it again and he betrayed Dazaifu City’s Group of Ten this time!

Then again, Hattori and his goons will have to eliminate Franc because he outlived his usefulness. Goddammit!

However, it seems that Abraham Louis Franc was saved by Sena Hoshimiya who decides to make Franc as her bodyguard. Man, I have a feeling that Eiji will force to fight Sena-chan.

But you know what, Gennai is the one benefiting this chaos because he’s responsible for granting Eiji’s wish in the first place! Anyways, I’ll see you next week!