Also, Mashimo-sana discuss about new information of a laboratory ship that was sank 1500 meters below, only to resurface via a volcanic eruption in the island of Nishinoshima, which is the place that’ll supposed to held the joint nautical training.

Yes, this laboratory ship will be investigated by the research team aboard the instructor ship Sarushima. But after reaching the wreckage, the researchers as well as the Sarushima crew got infected with the virus and that’s how the whole mess started in Haifuri.

Fortunately, Dr. Minami Kaburagi’s vaccine formula was delivered in time by the Blue Mermaids, and now we have to wait for its mass production in order to get rid of the totalitarianistic disease forever.

Anyways, let’s move onto the Harekaze crew and see if they’re doing fine there!

Unfortunately, Capt. Akeno Misaki and the rest of the Harekaze crew are being attacked by the Kongou-class battlecruiser Hiei.

Oh and to make matters worse, the Hiei are heading towards Chuuk Island which would infect countless civilians there. It’s a tough situation, but Capt. Misaki and her crew will have to work together to stop Hiei from spreading the hate plague!

By the way, their principal Mayuki Munetani approved the Harekaze’s use of weapons so there won’t be any case of mutiny.

Anyways, it’s all hands on deck for the Harekaze crew as it’s time to stop the battlecruiser Hiei whatever they can.

Also, Mei Irizaki is excited to fire torpedoes at the warship!

But it seems that she missed her target on purpose, because their schoolmates are inside Hiei and Mei doesn’t like murdering her fellow students.

With that said, Mei Irizaki is just firing torpedoes to slow the warship down…

…until Hiei got snagged by a low tide area. Well, looks like Chuuk Island is saved and the Hiei crew somewhat got snapped out of the hate virus once they exposed to seawater.

Did you know that seawater can get rid of the virus as well? Then again, it won’t work once the person got infected for a longer time period!

In any case, another crisis was averted by the Harekaze crew! However, this episode is not yet over because there’s a new character introduced.

And here’s that character as Mafuyu Munetani takes the stage! Oh yeah, and she’s here to say hello to her sister Mashiro… 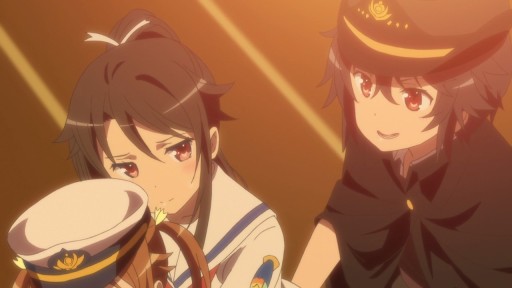 …by grabbing her ass! Well originally, Mafuyu-san wanted to grab Mike’s booty but I guess Shiro-chan will have a taste of sexual harrassment from her sister.

In any case, I’ll see you next week and I hope the vaccine is ready, or Dr. Kaburagi’s efforts will be in vain!