So after last week’s episode where they beat Yoruba and Mirasa at their own game (with some help of course), Kennosuke Tokisada Ouma and Yukina Shirahane got a taste of getting their first paycheck.

Then again, Kennosuke doesn’t know how to use it yet. You know what, let’s put that money into good use…

…by inviting their friends for an outing at the mountains. Oh and by the way, Kennosuke knows how to prepare cook curry with some help from Yukina-chan of course!

On the other hand, here’s José Carlos Takasuka showing his video editing skills as a parting gift to his friends.

Then again, he made a shitty edit of the cosplay footage from Episode 16. Really Carlos, no one’s gonna remember your work once you return to Spain, especially Mika Ogino where she puts her soul onto this cosplay video! 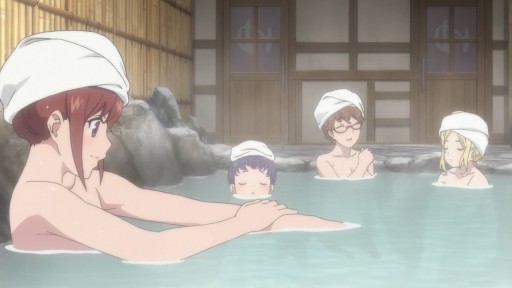 Meanwhile, the girls are enjoy at a hot spring and it’s sucks that Yukina Shirahane didn’t join them.

By the way, Ryouto, Jundai, and Carlos are sleeping at the cabin so the girls are nothing to worry about being seen by the boys. Oh, and Kennosuke won’t try to peek onto girls ’cause he’s a honorable man!

Also, it’s surprising to see Muetta again after surviving the fall from the dam.

Then again, she won’t forget the day that Mirasa turned against her, and it seems that her body is getting weaker due to the venom that was laced in Mirasa’s blade.

By the way, here’s a glimpse of Muetta’s planet Efidolg, which means that she’s not Princess Yukihime. It looks surreal, but I wonder why they want to invade Earth and get all the hinge stones in the first place?

Unless the hinge stones are related to the restoration of their own planet or they want to let their people on migrating to Earth should the stones are used to power up a weapon, it’s still a mystery on what their intentions are other than kidnapping Earthlings and conquering lands.

Anyways, Yukina Shirahane finds Muetta and she’s in a critical condition. So, she called Kennosuke for help! 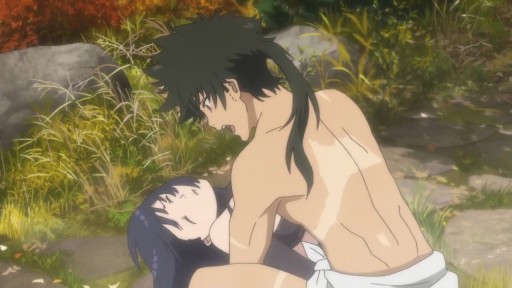 Well, he did came to aid Muetta but let’s face it, Muetta is not Princess Yukihime as she’s a different person.

Then again, what happened to the real princess unless Yukihime is already dead or someone used her DNA to create a clone like Muetta. So many mysteries piling up and I hope there’s answers or I’ll be disappointed!

Lastly, it looks like Yukina Shirahane was captured by Efidolg. Damn those demons, it’s deja vu all over again!

I hope that nothing bad will happen to her on the next episode ’cause I don’t want her to become an enemy. Hell, I’m expecting that masked demon to rescue Yukina-chan just like last time!