Ever since Colette painted this figure to look like a dark-skinned severed head with a “meat” kanji in it, Mizuki Usami couldn’t stand it that she wanted to find another one.

Oh, and buying one is out of the question as the club president used all of the funds to buy his new pillow!

And so, Mizuki went to the storage room where it was originally the art club’s clubroom.

Together with Subaru Uchimaki, she’s finding a spare unpainted head statue so she can sketch on it without any distractions.

As for the club president, he’ll take his leave ’cause they’ll be fine by themselves…

So, the president close the door and went home. Also, Colette left the school afterwards!

Well then, seems that Mizuki and Subaru will manage things inside the storage room.

Never mind, looks like the door is completely shut and they’re locked in.

Damn, things got escalated quickly for both of them! Also, no one’s gonna open the door and Usami is very nervous when she’s with Uchimaki-kun!

Don’t worry though as Subaru-kun has some company in the form of his waifu figure.

I mean, he’s interested in 2D girls so it seems that Uchimaki won’t make a move on Usami.

Meanwhile, here’s Yumeko Tachibana as it looks like there’s some hope for Mizuki and Subaru on getting out of the storage room…

…right after Yumeko-sensei noticed a beam of light. By the way, I forgot to tell you that Subaru’s figure has a built-in flashlight!

Then again, seems that his waifu figure shoots out lights from her eyes, which is pretty much scary not just for me…

…but for Yumeko-sensei as she passed out. I guess she’s too scared to walk alone at night!

Well, looks like both Mizuki and Subaru will be stuck at school forever!

But on the other hand, Uchimaki found a door after seeing a picture of the previous members of the art club.

Anyways, they check on the door and open it…

…which leads them back to their clubroom. Great, both Usami and Uchimaki are finally free and also, the art club has some free space now that they have access to the storage room!

As for Mizuki searching for a spare head statue, she found out but it’s already painted by the previous club members. Also, they woke Yumeko-sensei up after getting out of the storage room.

…much to Mizuki Usami’s chargin’ as she has feelings for Uchimaki-kun, but Usami can’t tell him because she’s shy!

I have to say that sooner or later, Subaru will abandon his 2D waifu in favor of a chuuni named Maria. Better take his heart before someone else do it, Mizuki!

Anyways, looks like the art club will have a treasure hunt! Sucks that Colette didn’t join this activity…

So after finding some clues, they finally found the treasure that was hidden under the walkway tiles.

And when they open it, they found something spectacular that the box is shining! Ladies and gentlemen, the contents inside the box is finally revealed to be… 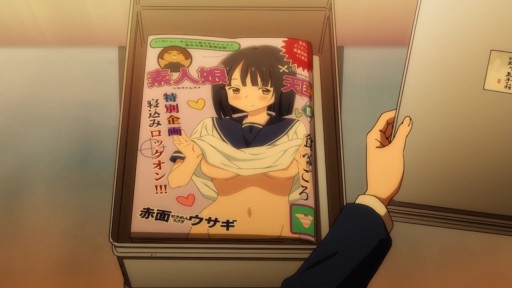 Well then, that’s the end of this week’s episode! Gotta say that Mizuki Usami wasn’t pleased to what she saw!

Oh yeah, and don’t ask me on what happened to the treasure box. They either bury it again or put into the incinerator.