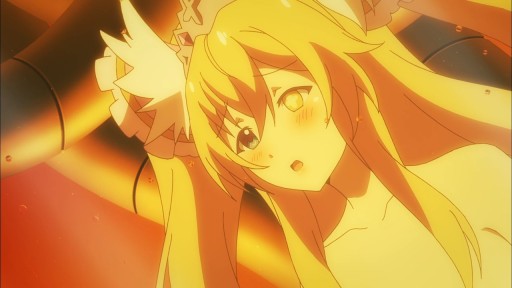 Let’s start this week’s episode with Ramiel after being rescued by Elel from the Dark Side. Yeah, there’s nothing to say about this!

On the other hand, both Elel and Almaria competing for Saya Sougetsu’s affection. Really, are they supposed to fight over Amane Ayashiro? Oh wait, Amane is currently frozen!

Speaking of Amane, Code Ω 77 Stella talked about how she met the α driver. Unfortunately for Stella, Amane Ayashiro treated her like a doll or a tool at worst. C’mon Stella, it could be a misunderstanding as Amane treats you like a daughter!

In any case, Code Ω 77 Stella has received a distress signal from Code Ω 46 Xenia at the White World. Then again, I doubt that she’s asking her help as it might be a trap!

Anyways, this is System White Eguma where it’s basically a cyberworld. Or in layman’s terms, this White World is like you’re inside a computer!

Now then, is Xenia’s distress signal actually a trap set-up for Stella?

Why yes, it is a trap made by Code Ω 46 Xenia! Oh yes, and she’s joined by Code Ω 33 Carene as they’re convincing Code Ω 77 Stella to join the Dark Side!

Gotta say, I’m not surprised there since the SR and EXR Progress are forcing the UC girls to join Ouroboros, ’cause doing bad things is very cool! Then again, Stella won’t join the Dark Side so easily…

So, both Xenia and Carene fused together so that they can create a virus that’ll destroy the world crystal. Like I said, it’s not surprising ’cause we’ll see the same thing in future episodes!

Tune in next week as Stella will try to save both Xenia and Carene from the Dark Side!