Posted on September 2, 2016 by benigmatica

Here’s Maria Imari as she’s having a treasure hunt of her own together with Colette.

Anyways, they’re finding the Necronomicon which is a grimoire that’s forbidden to get one. But you know what, there’s a dangerous book out there that’s more powerful than magic…

Obviously, Subaru Uchimaki tries to dispose of it but the president refused to do so. To the club president, it was his treasure passed down by the previous Art Club members! 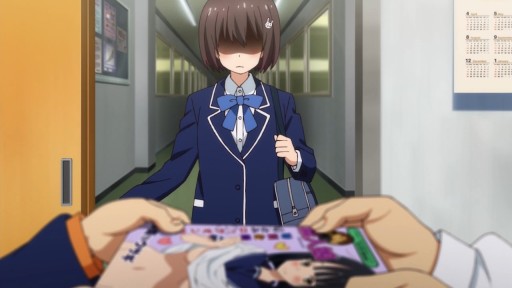 …when Yumeko Tachibana arrives at the scene. Sure that she’s cute, but don’t be fooled by her looks as Yumeko-sensei is very scary!

Well then, looks like the club president will have to hide his magazine somewhere that his club advisor won’t find it right away!

But then again, he’ll just give it to Subaru and put the magazine back to where it belongs, which is under the walkway.

And so, Subaru Uchimaki rushes towards the place where the “treasure” was found last week. Oh, and he’s not alone because Mizuki Usami is there to clean up any traces of it!

Unfortunately, both Uchimaki and Usami were caught by Colette and Imari, as they found something dangerous underneath Subaru’s shirt like the mythical book Necronomicon.

In any case, Colette pulls Subaru’s shirt up to reveal the infamous treasure. Unfortunately for Colette, she’s unaware that what comes out of Uchimaki’s uniform…

Then again, she happened to see it anyway. Of course, it looks like Yumeko Tachibana is there and she’s not looked too happy upon seeing the magazine!

Moving onto the next scene where this guy has returned to challenge Subaru again.

Um, I don’t remember him competing against Uchimaki in previous episodes- Wait, I remember Subaru stomping that guy at an art competition back in Ep. 7!

In any case, another round between this jerkass guy and Subaru Uchimaki has begun. This time, they’re making a sketch of Mizuki Usami who wants Subaru to lose this challenge!

Then again, seems that the nameless rival is just getting started with his work. It’s no wonder that this guy didn’t get a pass to the competition because he’s a newbie!

Well then, it’s another win for Subaru Uchimaki and his latest waifu creation. After all, he only makes magnificent 2D girls like it was Tuesday (even though it’s actually Friday)!

Lastly, here’s a character that was previously appeared in the earlier parts of the series.

This is Moeka and while Subaru found her mother, she’s here to see her grandfather who is working at this school. Of course, it’s dangerous to go alone as they are people who will kidnap Moeka-chan…

…like this guy who happened to be the president of the Art Club! Moeka-chan, stay away from him or he’ll lock you up somewhere!

Just kidding, the club president won’t do that as he prefer skipping classes and take naps outside!

Eventually, Koyama-sensei found both the club president and Moeka. Oh yeah, and it turns out that Koyama-sensei is Moeka’s grandpa!

Still, he told his grand-daughter to go home. C’mon, Moeka’s mother is worried about her!

Of course, Moeka won’t leave the school unless she shows her artwork to Koyama-sensei. Yeah, it looks cute and I think Moeka will become a talented artist someday!

In any case, that’s about it for this week’s episode. I’ll see you next week then…