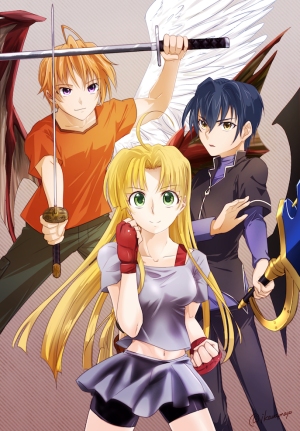 On October 22, 2016 during Fujimi Shobo’s Fantasia Bunko Thanksgiving Event 2016, the publisher announced a new TV series for Highschool DxD. Of course at this time, there’s no information regarding the announcement whether it’ll be a continuation or a reboot.

So to celebrate this occasion, let’s go back to Highschool DxD BorN as I make a brief review on Ichiei Ishibumi’s six-part novel spinoff called Highschool DxD EX. For those who bought Funimation’s Blu-ray release of the 3rd Season, you’ll be disappointed as they didn’t include the novels (unless I’m proven wrong).

NOTE: The six-part Highschool DxD EX novel is available on Baka-Tsuki although I’m not gonna talk about the translation as long as I understand the plot. Also, please read the novels, otherwise Kadokawa and/or Yen Press might take it down.

The story of Highschool DxD EX tells from Azazel’s perspective as he and Kuoh Academy’s Occult Research Club have encountered bio-mechanical monsters called Underworld’s Lifeform or UL for short, which they have traveled to the past in order to kill Issei Hyoudou and his friends. And the reason why the UL wanted to kill Ddraig’s current host is because of Loki, who is out for revenge after being defeated in the original light novels.

Fortunately, Azazel got some allies in the form of Issei Hyoudou’s future children, which they also traveled to the past in order to prevent the future from being changed. Of course, they don’t want to be seen nor recognized by their parents or they might create a time paradox.

2. My thoughts on the story

I have to say that upon reading the EX novels, I’m surprised that Loki has returned after doing nasty things in the last 3 episodes of Highschool DxD BorN, although he’s bent on bringing Ragnarok in his own way by recruiting various factions like the Seven Magnificent Hunters and the Invasion Fanatics, so that they could change the future in the most horrible way possible. Oh yeah, and I want to see that prankster god’s ass kicked by Issei’s kids plus Azazel-sensei, although he’s powered-up after using advanced technology to not only curse Asia but to use his artificial Fenrir as a Scale Mail.

Now then, let’s talk about Issei Hyoudou’s children as the Harem King have 11 kids to take care of (There’s technically 10 as one of Issei’s kids didn’t exist yet due to unfortunate circumstances), although Asia Argento (or Hyoudou) and Yuuto Kiba became foster parents of the children in Issei’s absence as the Red Dragon Emperor is busy visiting various gods and promoting peace. You know, it would be nice if Issei Hyoudou has some private time with his harem, but I guess that he’s too pre-occupied with various things in his life.

Continuing with my thoughts on Issei’s kids, I have to say that I found some interesting ones like the new Church Trio consisting of Zen Quarta, Shin Shidou, and Airi Hyoudou. These three inherited their teamwork from their respective mothers (Xenovia, Irina, and Asia) and they’re more effective, especially Airi as not only she made a pact with Fafnir which grants her a Scale Mail, but she got combat training from Sairaorg Bael who is one of the strongest devils in the underworld. Still, they hate Loki for putting a curse on their mother Asia and they’ll do anything to rescue her.

Oh, and let’s talk about Ex Gremory as while he respects his mother Rias Gremory, as well as receiving training from both Yuuto Kiba and Vali Lucifer, his relationship with his father Issei Hyoudou is somewhat strained as Ex blamed his father for not saving Asia. Let’s just say that Issei didn’t spend much time with his wives and children especially Ex. Well, it’s sucks for him being the hero of the underworld and the Oppai Dragon! But you know what, I think Ex Gremory should respect his parents someday, including Issei Hyoudou.

As for the rest, they’re okay as least like Kurenai Himejima who acts as the strategist and created various Sacred Gears for his siblings, Shirayuki and Kurobara being cute nekomata and respective daughters of both Koneko and Kuroha, and Robertina Hyoudou who is not only the daughter of Ravel Phenex but also a great asset on finding the cure to Airi’s curse. 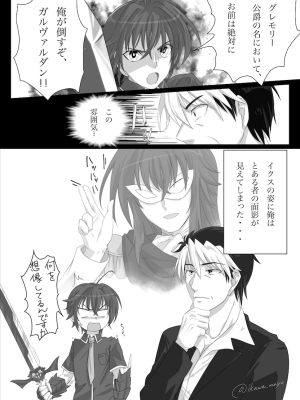 And now let’s talk about what happened to Issei Hyoudou’s wives plus Gasper Vladi and Yuuto Kiba. While Yuuto Kiba became a sword master to Ex Gremory, Zen Quarta, and Shin Shidou, it’s amazing to see Gasper Vladi becoming like Azazel as he not only the commander of Issei’s children, but Gasper became a super vampire who can stop time completely.

For Issei’s wives, they got great careers in the future like Akeno Himejima becoming a Grigori executive, Asia Argento and Ravel Phenex being married in the Hyoudou household, Rias Gremory being a successful businesswoman who owns various industries in both the underworld and in Earth. Of course, they’re too busy with their careers and they have little time for their kids except for Asia. Still, Issei’s kids got the chance to work together with their parents during Loki’s reign of terror in the present, although their combined strength is not enough to beat that prankster god.

As for Issei Hyoudou, sure that I’ve previously discussed about his future role as ambassador to various mythological factions but despite all of that, he still cares about his kids as Issei arrives at the present to beat Loki and his group of bio-mechanical beings into submission… as a giant dragon of course. It goes to show that his determination to protect his loved ones (and his love for breasts) hasn’t changed just like Issei Hyoudou from the present. In any case, the future has been secured thanks to Azazel, Gasper Vladi, Issei Hyoudou and his beloved children.

To me, reading the 6-part EX novels was a great experience after watching Highschool DxD BorN, as Loki deserved a poetic justice from Issei’s kids which saves the timeline. Of course, whether or not this novel fixes the anime series is up to you, but what’s important is that Loki became one of the prominent evil gods who not only made a threat against the heroes, but suffered defeat at the hands of the Oppai Dragon’s power when attempting to tamper the future.

Meanwhile, I want to see an epilogue on what the future looks like after defeating Loki and the Invasion Fanatics, as the EX novels didn’t show it at all. I mean, I wanna see Ex reconciling with his father Issei as well as a happy reunion with their parents. Speaking of Issei’s kids, I think Ishibumi-sensei should expand their stories once the main series ends as it’ll be interesting to see their adventures in their timeline.

One last note before I close this review out is that the EX novels foreshadows some of the elements to the later light novel volumes so it’s not safe for anime views to read this part. Things like Azazel’s death which led Kurenai Himejima to become his successor, as well as Rizevim Livan Lucifer’s contact with beings from another universe, have already happened in Volume 21 and reading that volume tears me up a bit. Hell, I’m saddened that Azazel, together with Sirzechs, Michael, and various mythological gods, sacrificed their lives to seal Trihexa for good.

In any case, that’s about it for my review of Highschool DxD EX. And remember, get hyped for the new series!

This entry was posted in Highschool DxD BorN, OVAs, Movies, and Specials and tagged #haremking, Highschool DxD, novel. Bookmark the permalink.
%d bloggers like this: