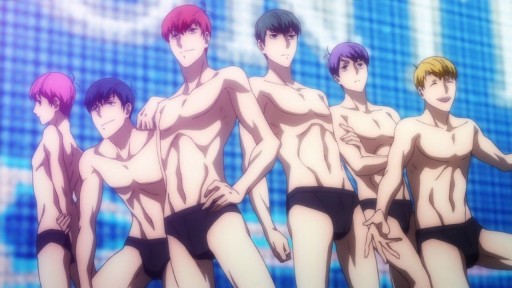 This post is brought you by the Matsuno sextuplets from Osomatsu-san, where they returned to their sexy F6 look for Episode 3.5! Well, they’ll stay like this for the first half and afterwards, Osomatsu and the rest will return to their original appearance.

While the sextuplets will have special episodes in the future, I wish Studio Pierrot will revive some of their old shows like Tensai Bakabon or even Anmitsu-hime for the modern audience!

Let’s start with Girlish Number and as you can see on this picture, this is how Chitose Karasume and her fellow voice actresses went through after finishing the recording of a shitty anime adaptation called KuuSure, which is based on an already-mediocre light novel by Hajime Kadokura and it’s sad that he’s having a bad time. But you know what, Kuzu-P and President Namba are just promoting the seiyuus in a bad way by casting them to a horrible anime, and I feel bad for the girls… except for Chitose!

Regardless, I feel that Girlish Number is starting to grow on me as Diomedia did a surprising job on this series! Hell, they even manage to highlight some of the characters like Momoka Sonou’s prestigious family background, Koto Katakura considering her retirement due to age, and Chitose Karasuma being the vain and amateur voice actress who only wants being praised.

In any case, with the second half coming up, how will Chitose Karasuma survive in this already-flawed anime industry now that KuuSure Season 2 is in the works? Then again, it might get cancelled!

Next up is Keijo!!!!!!!! where Nozomi Kaminashi and her friends from the regular class, have moved up to the elite class due to their sheer determination. Heck, even Nozomi went through hell when she’s under Nagisa Ujibe, which the former prize queen trained Kaminashi to have firmer buttocks and lighter body in order to use her secret (and dangerous) technique.

Of course, Nozomi Kaminashi and her friends will have a long way to go in order to become professional Keijo players. I mean, they have to face their rivals and beat them, as well as learn from the professionals in order to achieve a successful career as prize queens… if they’re good enough!

Anyways, let’s hope that XEBEC would keep the ball rolling in the second half!

Moving onto Drifters where Toyohisa Shimazu have finally met Nobunaga Oda and Nasu no Yoichi. Of course, those three are bickering most of the time until they’re pushed into a corner, especially Nobunaga where he’s complaining about being the leader instead of Toyohisa. Well, let’s just say that he likes controlling people from the shadows about being betrayed countless times.

On one hand, the three Drifters have managed to liberate the elves from the wrath of the Orte Empire, which is the successor to Nazi Germany and it wasn’t a surprise because they’re assholes to other races. Of course, the Drifters must confront the End who are led by the Black King. And speaking of the Black King, he’s not the one who got crucified by the Romans!

But despite of that, these historical figures are being manipulated by two players: Murasaki for the Drifters, and Easy for the Ends. Basically, the likes of Toyohisa are treated as chess players but until then, he and his fellow Drifters must band together in order to stop the Ends and I have to say that I’m understanding the story a lot. It’s still cool though thanks to Hoods Entertainment, so I’m hoping that the staff will make it more awesome (and funny) until the end.

And finally, let’s end this post with Mobile Suit Gundam: Iron-Blooded Orphans, where Mikazuki Augus got a rare conversation with McGills Fareed with regards to the growing tension in the Earth sphere. By the way, seems that the Earth Branch of Tekkadan got tangled in a senseless war and lost a ton of soldiers, just to ruin McGills’ reputation and derail his grand scheme.

You see, Rustal Elion and the influential Arianhod Fleet are the only thorns to McGills Fareed’s ambition of reforming Gjallarhorn. But the question is will McGills succeed, especially when he’s using Tekkadan to destroy his rivals? In any case, we’ll see about that once the series reached the halfway point.

Also, if Mikazuki learned that McGills accidentally murdered Aston Altland, he’ll snuff the hell out of Chocolate Man faster than any Char Aznable clone out there or the real one!

Anyways, let’s end this post with Sakamoto-kun as he went to space and become the stylish astronaut alive! No matter if he’s in the United States or even Mars, Sakamoto will always be on top of the game no matter what.

With that said, I’ll return in December for the conclusion of these anime series!