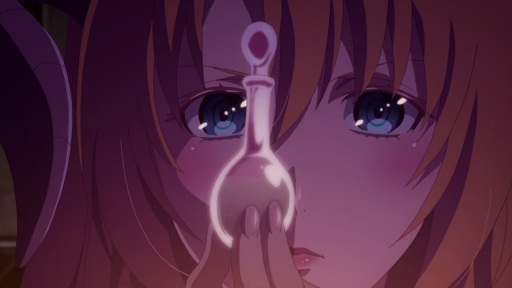 Well everyone, it’s time to focus on the Demon Lord of Greed, Mammom! Yes, she loves to make potions and stuff, but what she excels is buying real estate… in London, England! 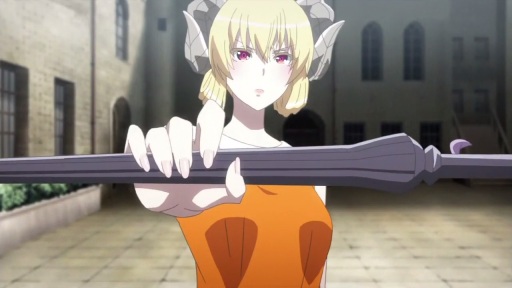 Naturally, Lucifer and her merry friends went to United Kingdom to challenge Mammon and defeat her.

Of course, Mammon might take advantage of Lucifer’s arrogance as the Demon Lord of Greed will just tire her out while throwing potions at her!

And speaking of potions, it melts clothes! You know, would it be better if TNK would stop adjusting the brightness levels ’cause it hurts my eyes!

On the other hand, Lucifer have managed to throw her lance at Mammon even if her clothes are in tatters.

But then again, she missed as the Demon Lord of Greed dodged it easily…

…but not one of the stained glass which Mammon is furious that the glass window costs millions to repair! 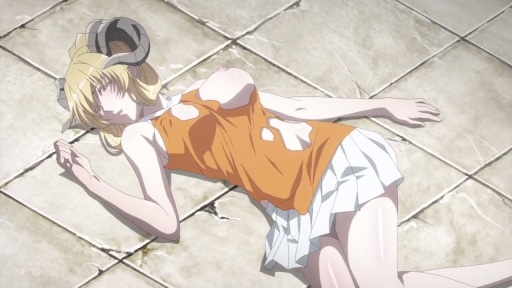 And look, Lucifer fainted after being chuckled by dozens of potions.

Welp, that’s sucks for this fallen angel and without Maria Totsuka and Leviathan at her side, Lucifer is pretty much screwed! 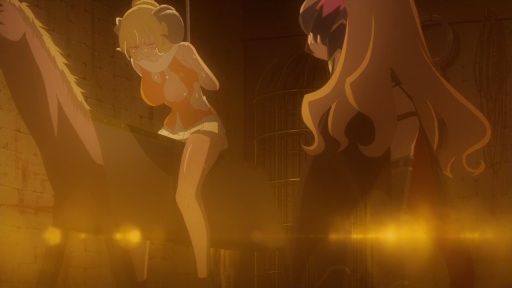 So much that she’s now being punished by Mammon via a wooden horse, the most kinkiest torture device ever!

Yeah, looks like the fallen angel will have to be sexually tortured again because the fans want to.

Meanwhile, here’s Maria Totsuka as she checks something underneath the drawer…

…which turned out to be a soul contract. Basically, a deal with the devil if you, a mortal, would sign up for various luxuries in exchange for damnation!

Then again, snooping around things inside Mammon’s potion shop would be very dangerous…

…as Maria encountered the Demon Lord of Greed and she’s about to be killed because Maria Totsuka knows too much.

Of course, Mammon won’t hurt Maria Totsuka just because she found one dirty secret, so the Demon Lord of Greed spared Maria’s life for one little condition…

And that’s by letting Maria to suck her titties like a baby calf! Ugh, I wonder what will happen if Maria Totsuka suckle on Mammon’s tits?

Let’s move onto Leviathan where she’s finding Lucifer-neesama because she’s very clingy to that fallen angel, all while leaving Maria behind because Leviathan doesn’t care about her!

She did find Lucifer however, but Leviathan just stand there and do nothing because the fallen angel wanted to conquer this wooden horse challenge.

Really Lucifer, you’re too arrogant to be saved by Leviathan!

Back at Maria Totsuka as she was dragged by Mammon to a room full of people, where they take care of non-existent babies for all eternity.

Yeah, can you see how horrible Mammon’s babies are? They’re just like cursed dolls where you might run away from them or you’ll get a dose of misfortune!

Now then, the reason why Mammon gathered all these people is because they want to run away from their worries, and so they devoted their lives to taking care of Mammon’s children.

But you know what, she’s just hoarding humans and their loved ones are worried about them!

Heck, even Maria Totsuka knows it well that these people should return to their loved ones instead of being cooped up in a room.

Even though her heart belonged to Lucifer, Maria still has that virtuous attitude since she’s a devout Christian! 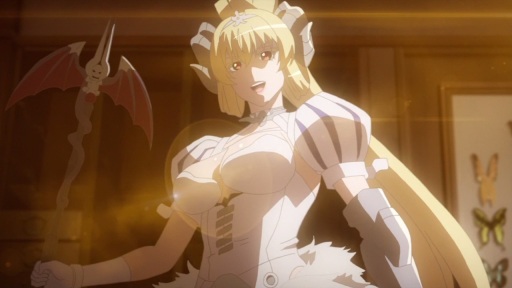 …starting by destroying her potion shop that the Demon Lord of Greed cared about. Like Mammon’s other properties, it costs millions of pounds to restore and maintain the shop!

As for Mammon however, she decided to give up because her properties and other monetary things are more important than her safety.

Really Mammon, you’re the most pathetic Demon Lord ever that Lucifer just beat you without any difficulty!

And so, the Demon Lord of Greed just got her ass handed by the fallen angel Lucifer, as she throws Mammon against the wall like a ragdoll.

Well, looks like Mammon has been defeated but Lucifer has a long way to go before taking on Belial. I mean, she beat both demon lords so far!

In any case, I’ll see you next week to find out which demon lord shall become Lucifer’s opponent.