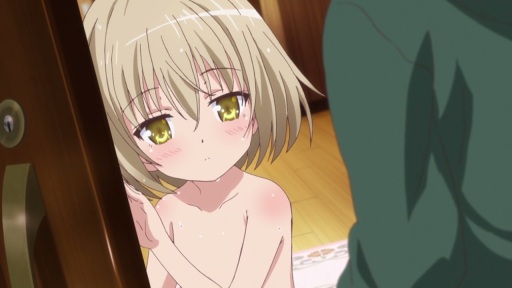 Well guys, I know that this is inappropriate but it happens all the time where Sora Kaneshiro appears in front of Kyo Nukui… in the nude! 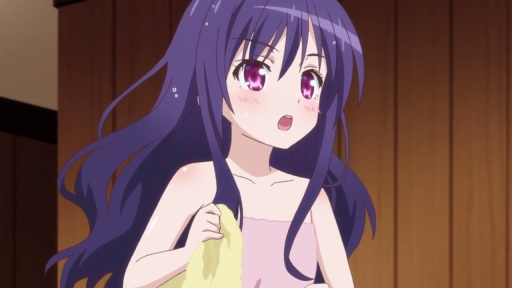 Also, here’s Nozomi Momijidani as she tries to get Sora back to the bathroom. Um Zomi, running in the hallway after taking a bath is dangerous… 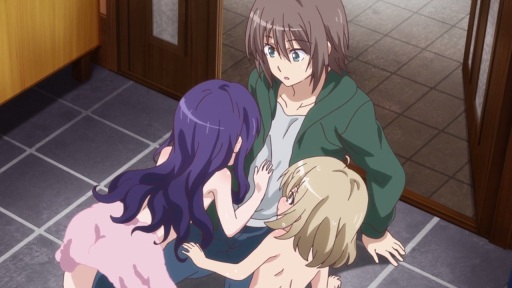 …especially when you slip and land on Kyo-nii’s chest. Well guys, time for Nukui to get arrested for pedophilia!

Just kidding, I don’t think Kyo Nukui is into lolis as he still continues to help Jun Gotou and her friends for their concert.

Then again, it appears that they’re relaxing at a park and some bystanders might think that Kyo-kun is into young girls. Really everyone, at least he didn’t fondle some chests on Jun-chan and her friends!

But to make matters worse, here’s Kurumi Nukui as she appeared to stop her brother for lusting other young girls. Seriously Kurumi, stop this shit or your brother will be in jail!

On the other hand though, Kurumi Nukui is actually the class president and she knows about Jun Gotou and her friends as she tries to reach them out. However, it appears that Kurumi couldn’t get along with these three girls since they want their Little Wing orphanage to be saved instead of being sold off.

Speaking of Kyo Nukui, here’s another insight into why he has low self-esteem as he’s being bullied in middle school due to being talented in poetry. Yeah, he has some bad memories after calling Kyo a poet and mocking him!

But you know what, I have to say that bullying is the worst thing ever as young people might have negative thoughts like suicide. Those idiots are assholes for mocking Nukui just because they have nothing to do in life!

Now then, let’s continue off with Jun Gotou and friends as they still trying to hand out flyers to bystanders and promote their concert. Then again, it seems that they’re having a hard time attracting the crowd.

Also, seems that they’re hungry after a day of handing out flyers, so Jun-chan called someone to get something to eat… for free! Why they need to do this?

Well it turns out that she called Sakura Toriumi to give them bread for free.

Gotta say that Sakura looked good in her uniform, although she wanted her part-time job to be a secret.

Oh yeah, and it turns out that Jun Gotou and her friends knows Sakura Toriumi where she was a former orphan at the Little Wing orphanage. Gotta say that it’s a small world for Kyo Nukui to meet his middle school acquaintance together with the three girls.

Anyways, I’m glad that this episode showed Kyo’s traumatic past and while I condone bullying, I feel that Kyo Nukui needs to be brave and resolve his anxieties. Of course, the only way for him to break free from his inner demons is by music now that he has a chance to help Jun, Nozomi, and Sora.