Posted on September 9, 2017 by benigmatica 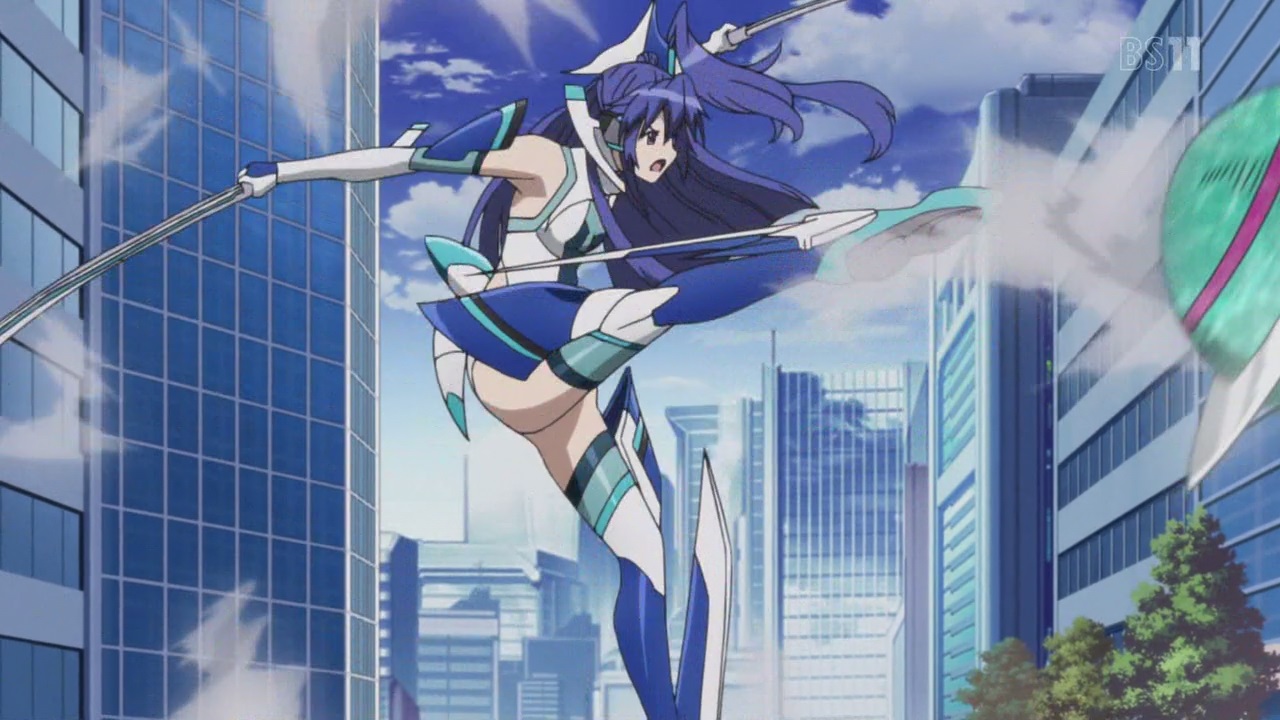 Hey everyone, seems that I’m finished catching-up with Symphogear AXZ (until the next episode that is) as this week’s episode shows Tsubasa Kazanari playing a game of Noise Ball… 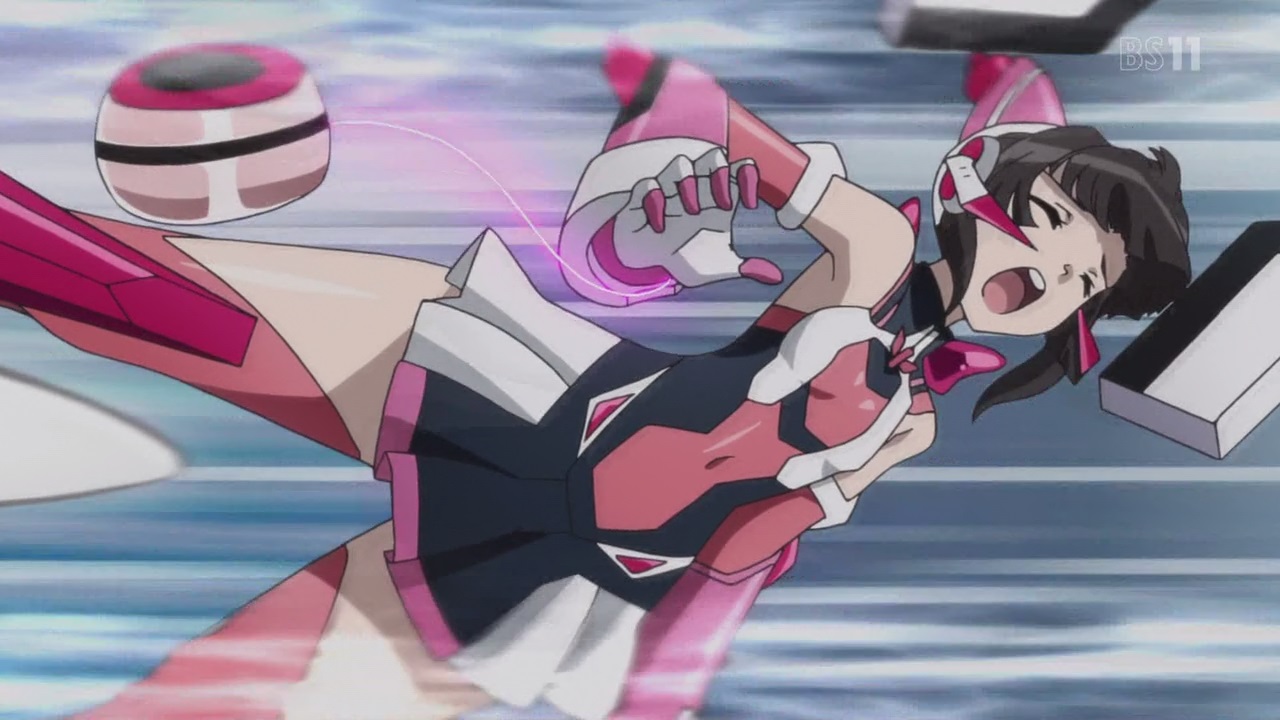 …with Shirabe Tsukuyomi. And I have to say that she’s bad at playing Noise Ball, but it’s not the point here as both Tsubasa-san and Shirabe are training together so that the six Symphogear users can work together without the hindrance of compatibility issues.

After all, the Bavarian Illuminati will target both Shirabe and her friend Kirika Akatsuki since they fight together perfectly. And not only that, but having Tsubasa-san and Shirabe singing and fighting together will be epic since you have Nana Mizuki and Yoshino Nanjou doing a duet! 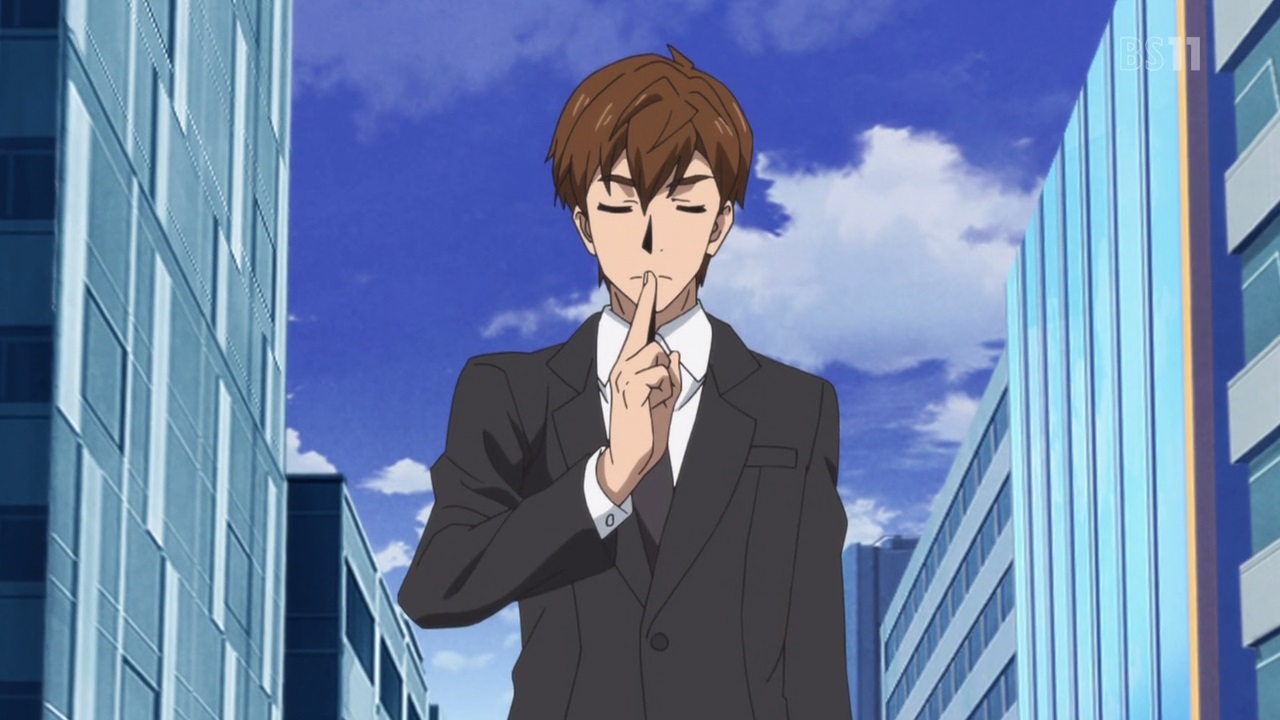 Anyways, here’s Ogawa-san as he joins the training session because why not! I mean, Ogawa is a ninja who’s also Tsubasa-san’s badass manager. Let’s see how he rolls against the Symphogear users, shall we? 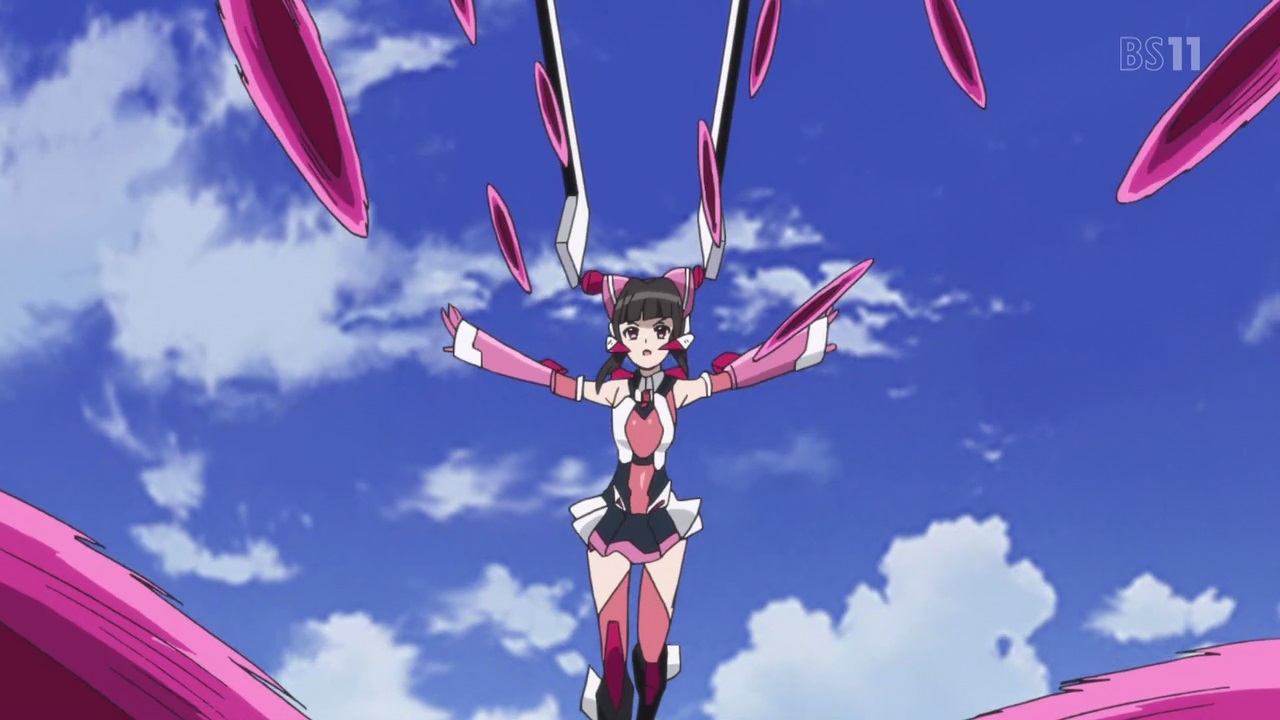 Now then, here’s Shirabe as she sends a flurry of buzz saws towards Ogawa-san. Um Shirabe, I don’t think that throwing saws blindly at Ogawa is not a good idea! 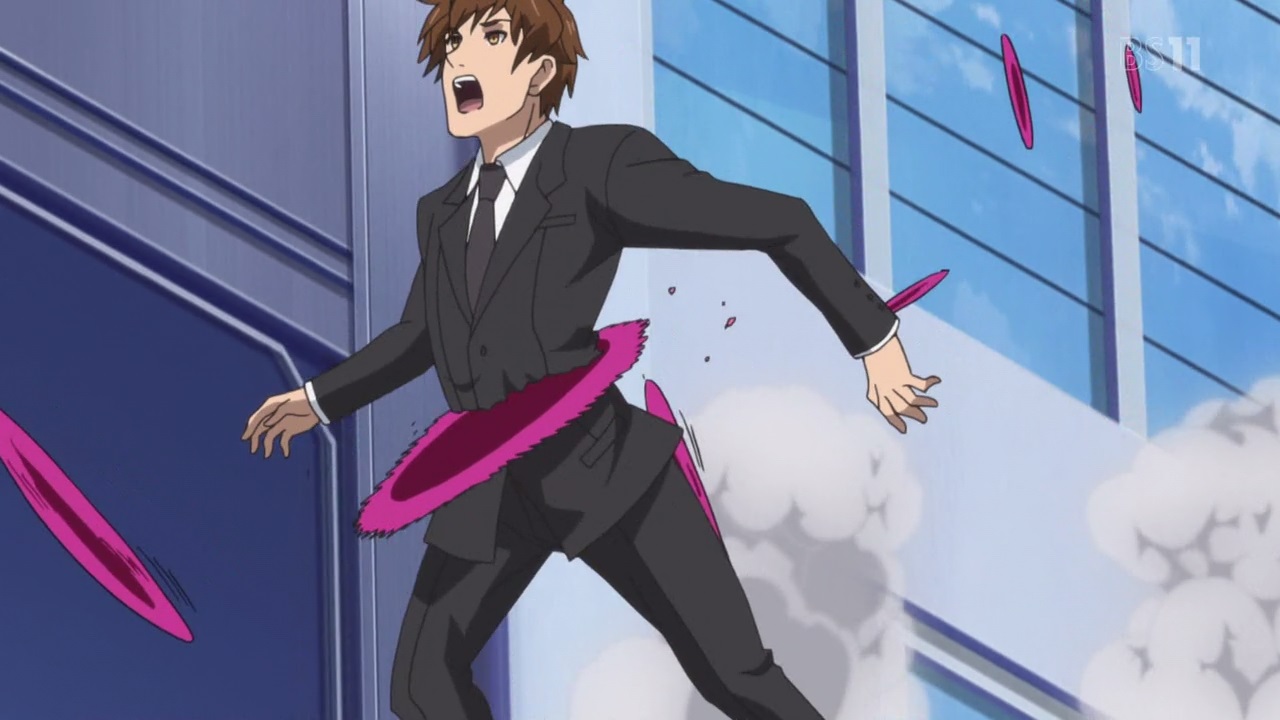 Oh never mind, seems that Ogawa-san is a goner as he got cut in half by one of Shirabe Tsukuyomi’s buzz saws. 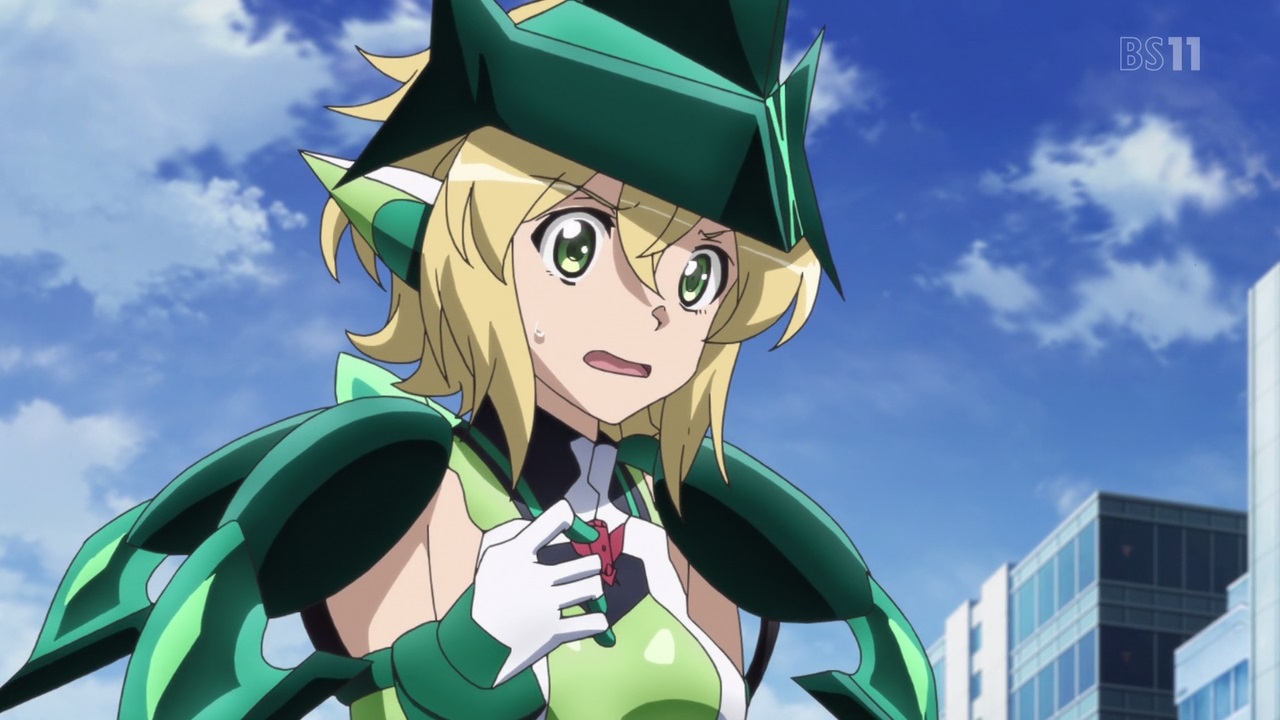 Even her friend Kirika couldn’t believe that an accident happened during training. Not like this! 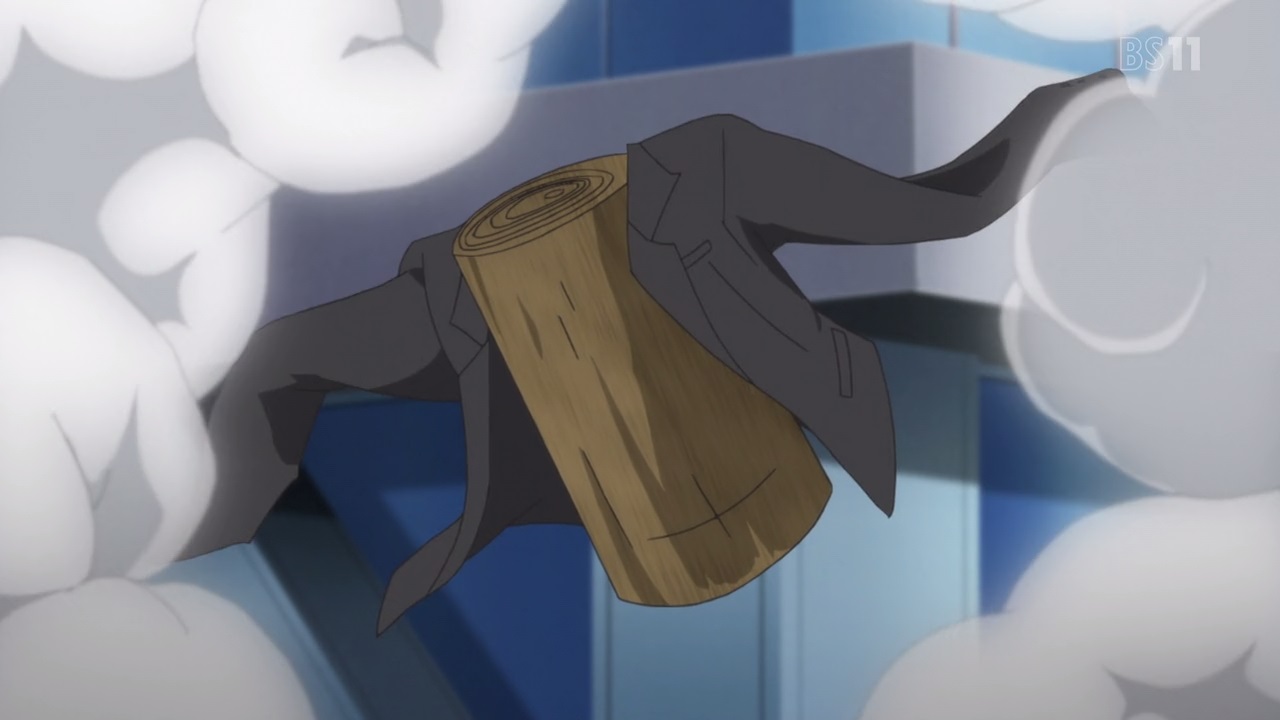 Just kidding, Ogawa-san managed to escape from harm by substituting himself with a wooden dummy. As expected from this ninja manager! 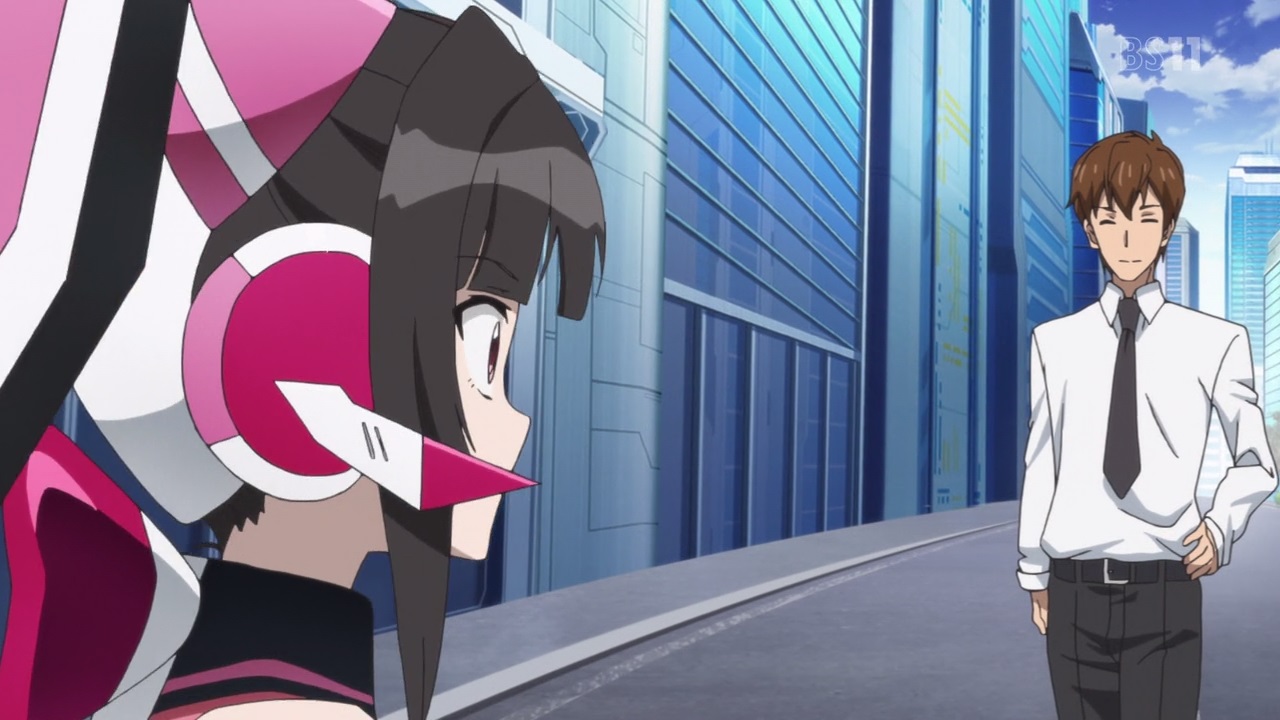 Anyways, Ogawa-san told Shirabe that she must use her power wisely instead of wasting it at a single enemy. That was wise coming from this ninja manager! 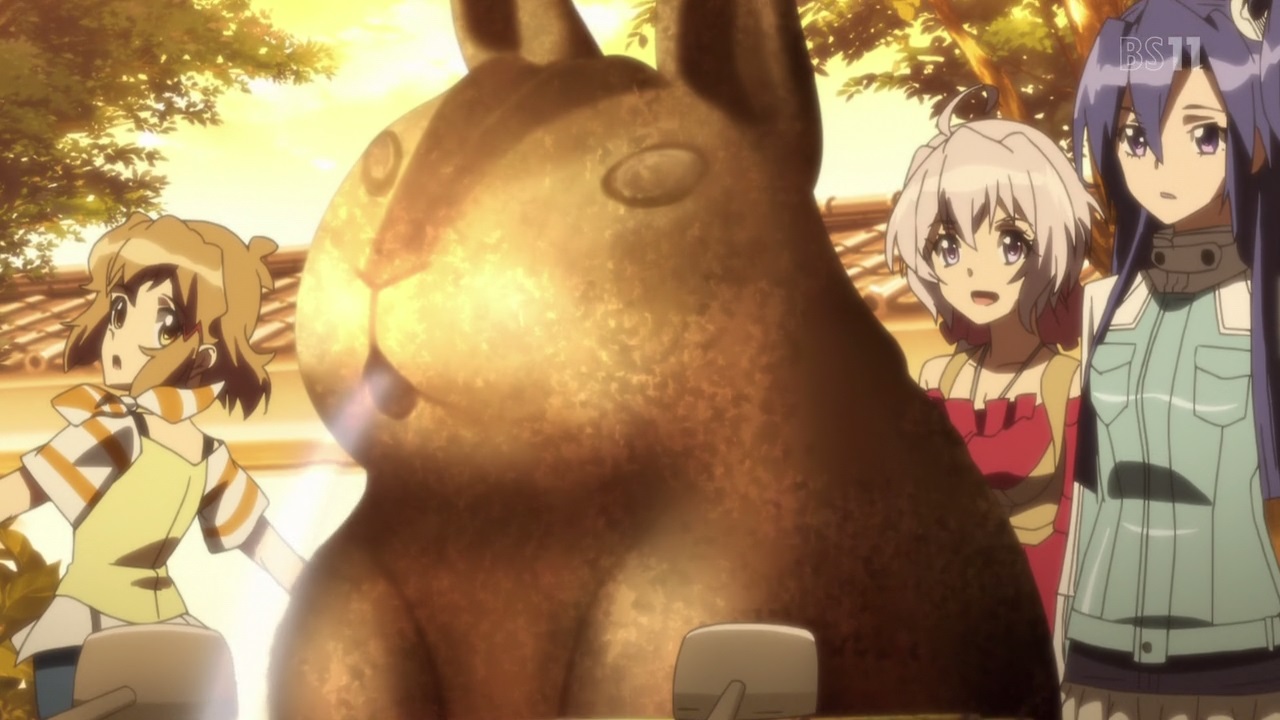 Now then, it’s time for the Symphogear users to unwind at the Tsuki shrine and damn, this place is full of bunnies which makes sense since they’re representing the moon. Of course, they’re not here to have fun and games… 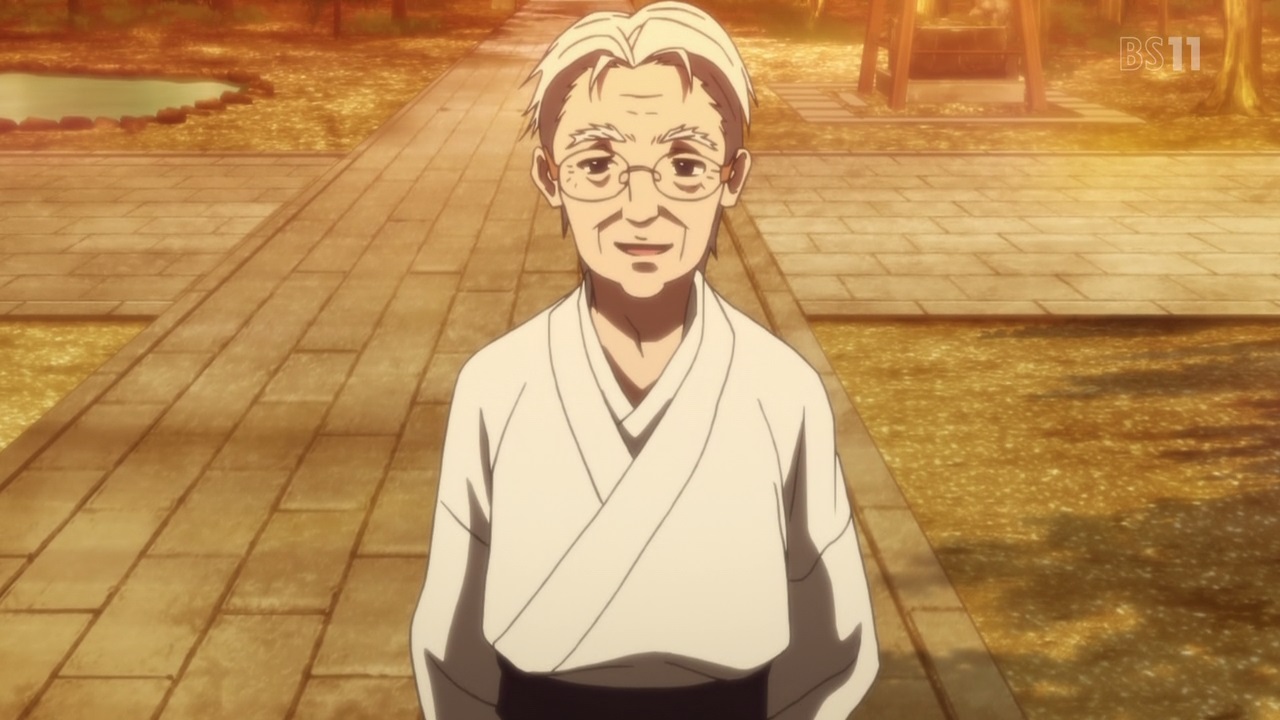 You see, Hibiki Tachibana and her friends are here to meet this shrine priest who knows about the location of the Hikawa shrines that make up the Divine Gate, which is shaped like an Orion constellation that opened up a portal so that gods can descend.

And since we’re talking about the Divine Gate, that’s how the Bavarian Illuminati is aiming for it so that Adam Weishaupt can receive his divine powers. But what he’ll use it for once Adam received it?

Well, the Lodgemaster is gonna use his newly-received god powers to turn Tiki into a human waifu. No seriously, that’s his motive apart from becoming the jerkass god! 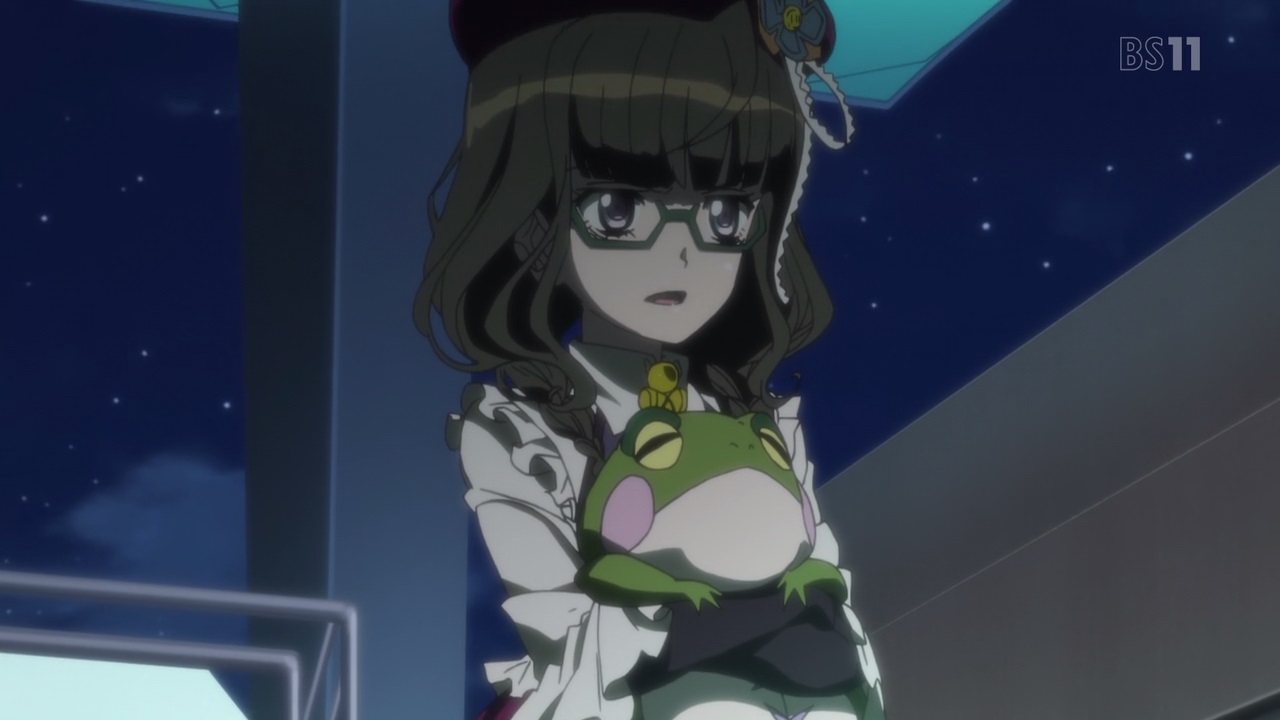 This prompted Prelati to defy Adam Weishaupt’s wishes because why would she waste her life on turning a mere Auto-Scorer into a human anyway.

Yeah, this is the last draw for this loli alchemist as Prelati will have to tell Saint-Germain about this betrayal of trust. 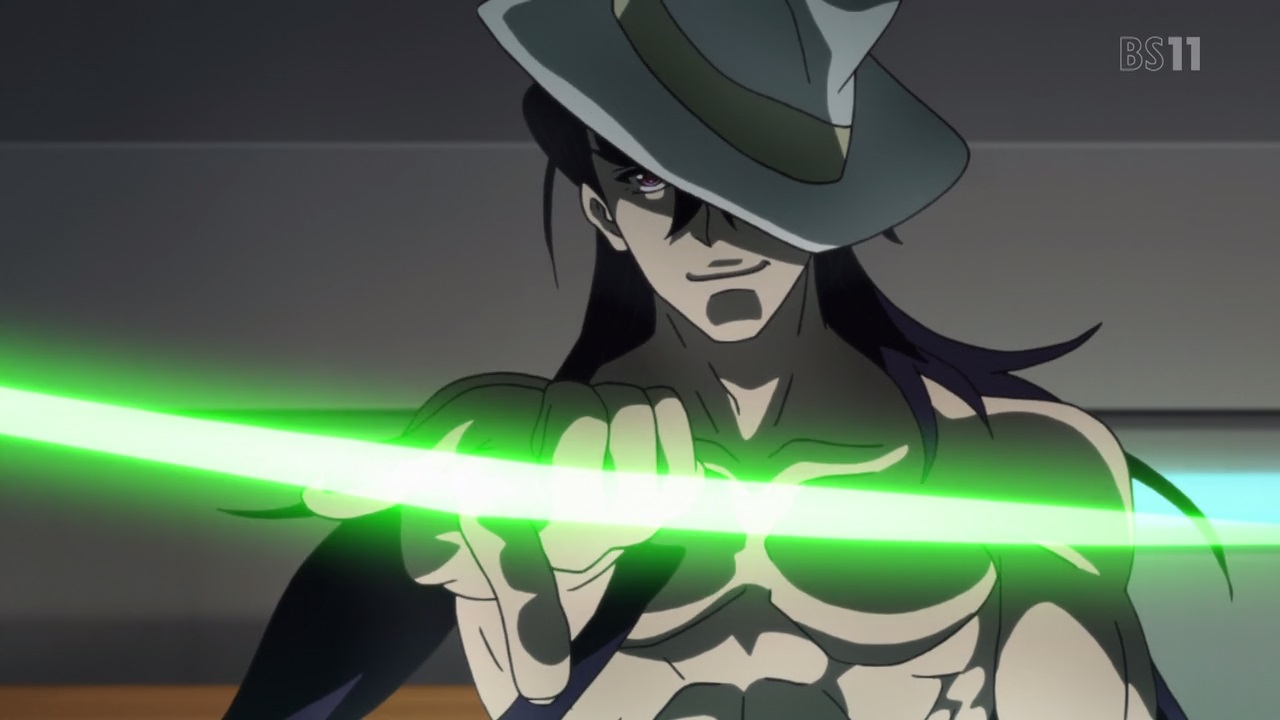 Of course, the Lodgemaster won’t let a mere alchemist know about his true motive as Adam attempts to kill Prelati off! 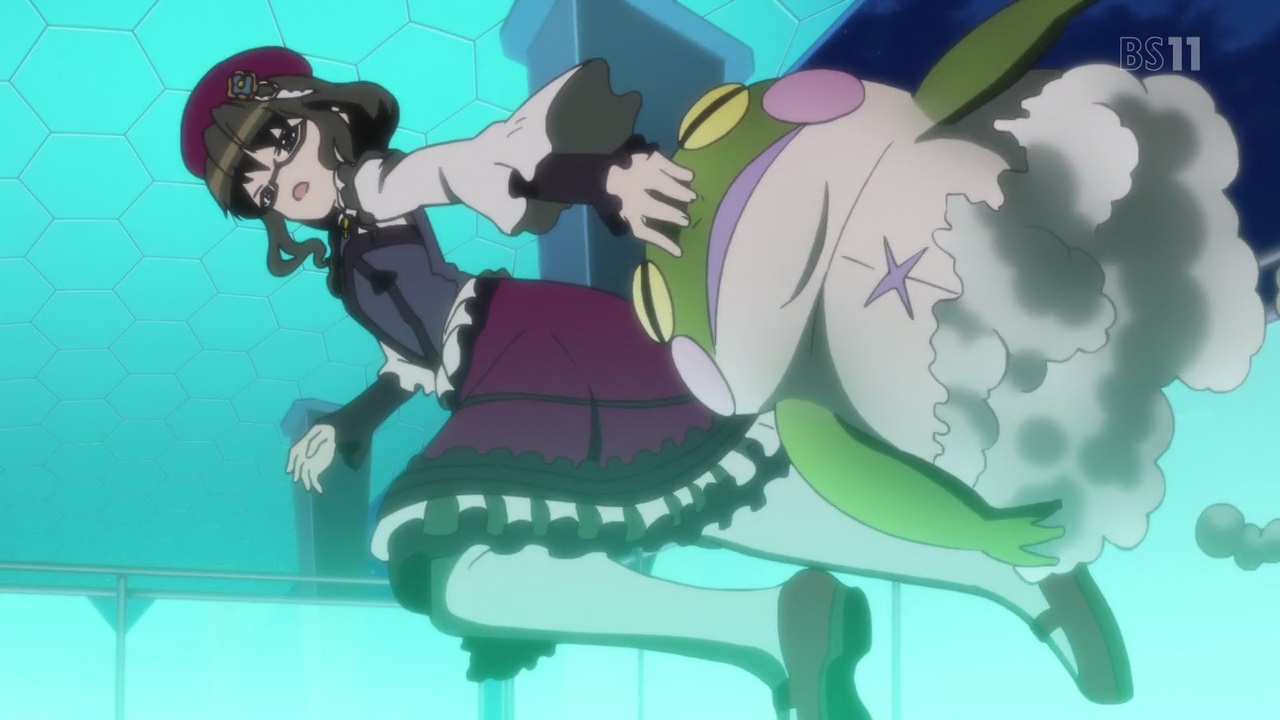 However, the only casualty that happened was Prelati’s stuffed frog. Yeah, it’s sucks that Prelati’s companion got destroyed by Adam’s finger beam! 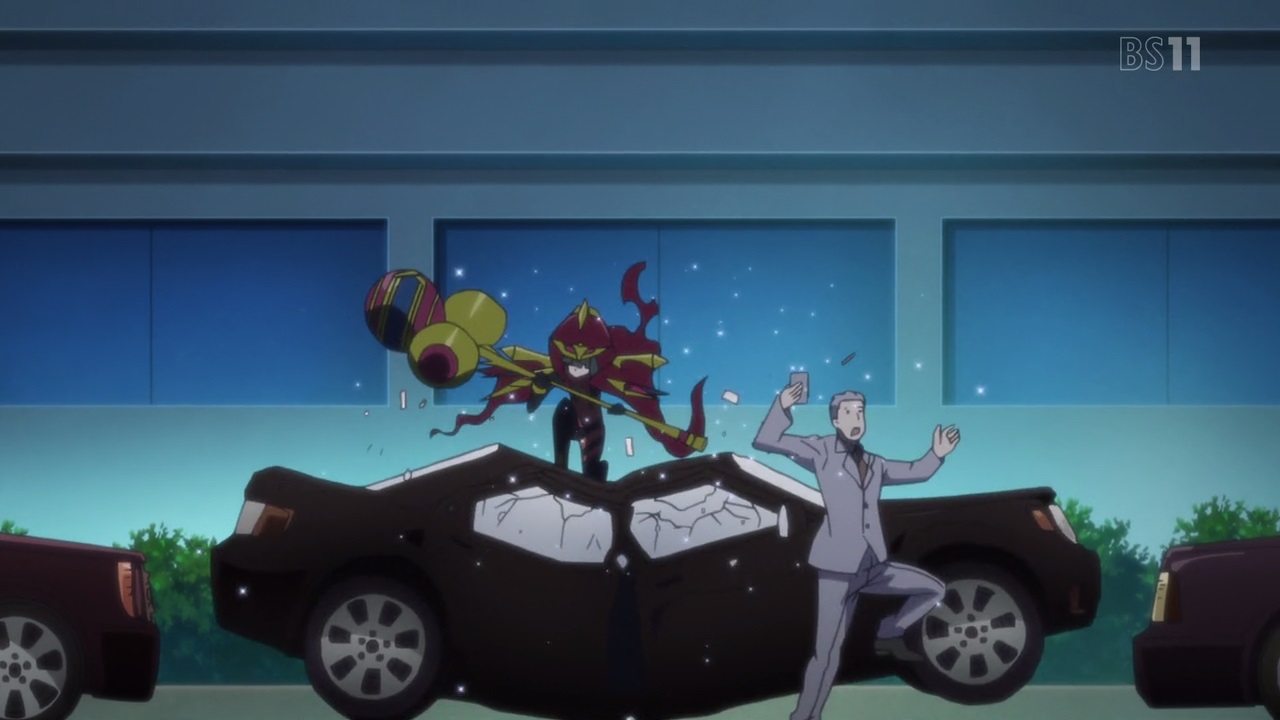 Anyways, looks like Prelati will have to go on foot and tell Saint-Germain directly ’cause the Lodgemaster blocked the signal.

You know what, would it be nice if Prelati surrendered to SONG and tell about Adam Weishaupt’s true motive on gaining his godly powers? Then again, she distrusts those Symphogear users… 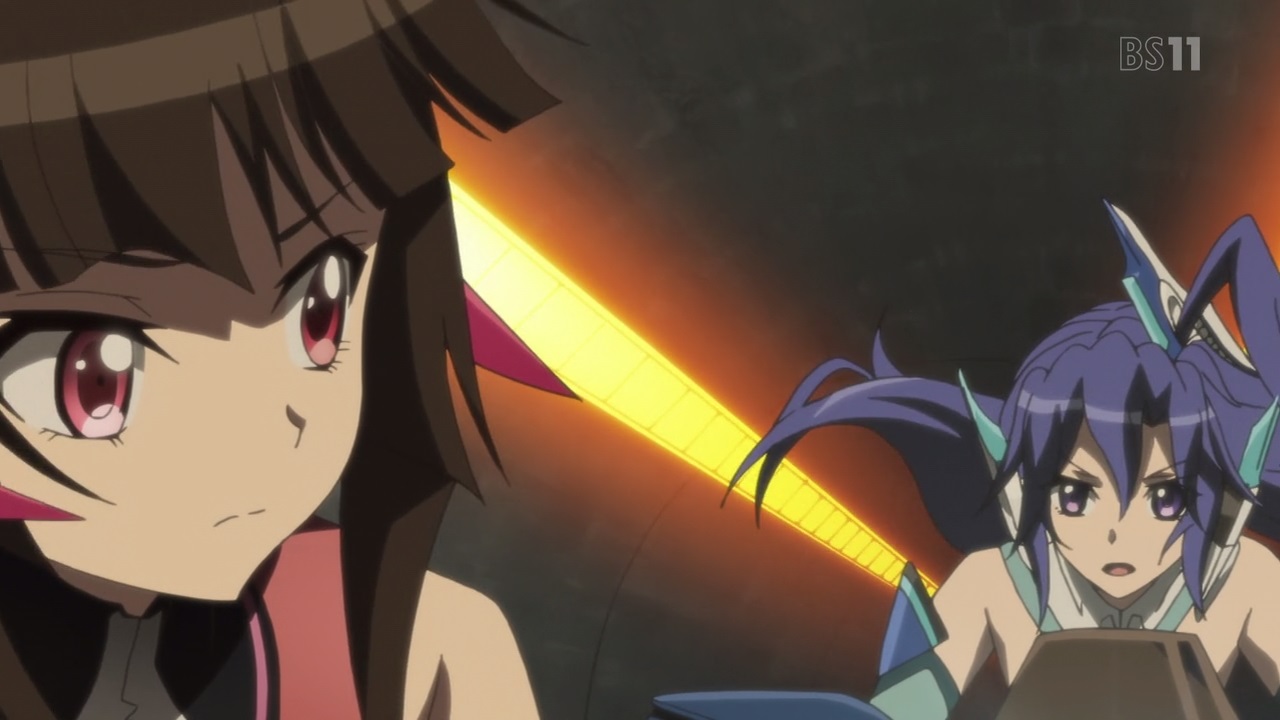 Speaking of the Symphogear users, both Shirabe Tsukuyomi and Tsubasa Kazanari are here to stop Prelati. Would it be better if they convince the alchemist to lay down her Faust Robe instead of killing her off?

Now then, Shirabe is worried that she might be a hindrance to Tsubasa-san as Tsukuyomi can only synchronize with Kirika Akatsuki. On top of that, Shirabe put up a wall towards others including Kirika. But you know what, Tsubasa Kazanari understands Shirabe’s plight as she put up a wall too when Tsubasa lost Kanade Amou.

So yeah, I believe that this partnership between Shirabe Tsukuyomi and Tsubasa Kazanari will work is because they have some similarities to each other like being ice queens after suffering some trauma during their lives. However, Tsubasa-san takes the initiative to help Shirabe out because she changed a lot after Hibiki befriended her. 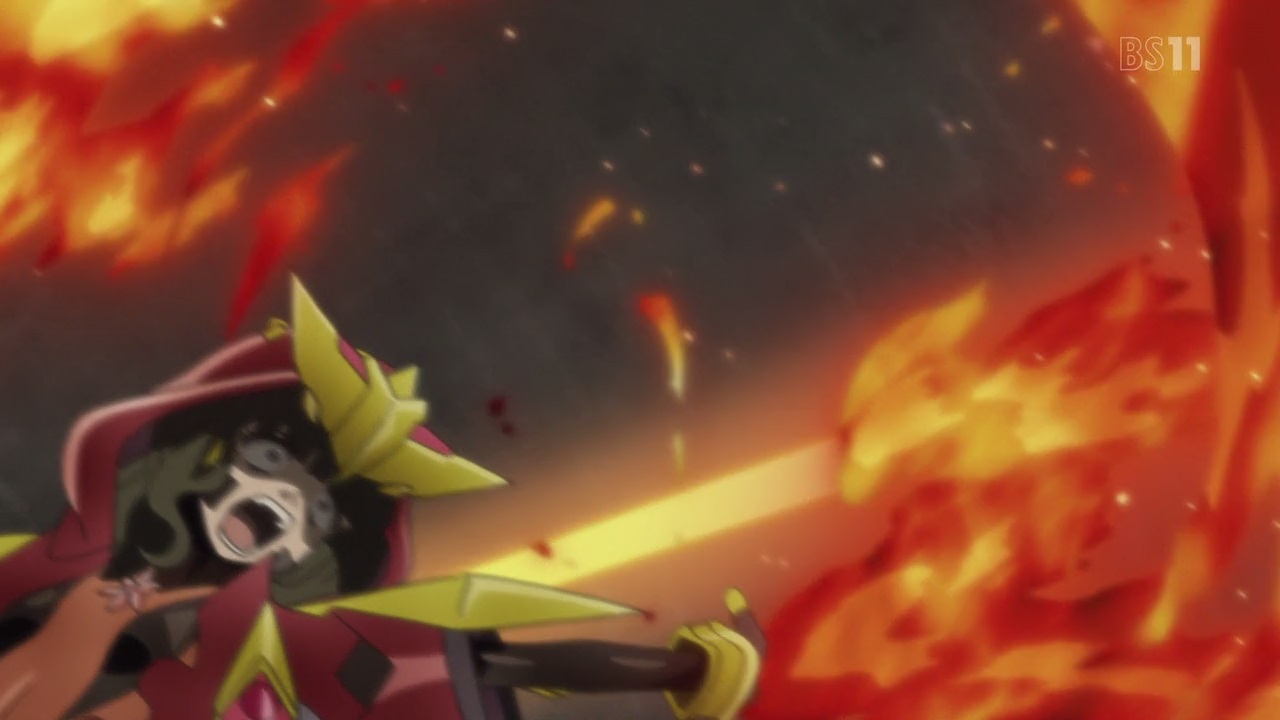 Anyways, let’s go back to the battle as Prelati throws fire at both Shirabe and Tsubasa-san. Yeah, she still have that psychotic face but would it be better if Prelati trusts these Symphogear users for once.

Also, Prelati is shooting fireballs inside a tunnel, which is dangerous since if she hits something like an air duct… 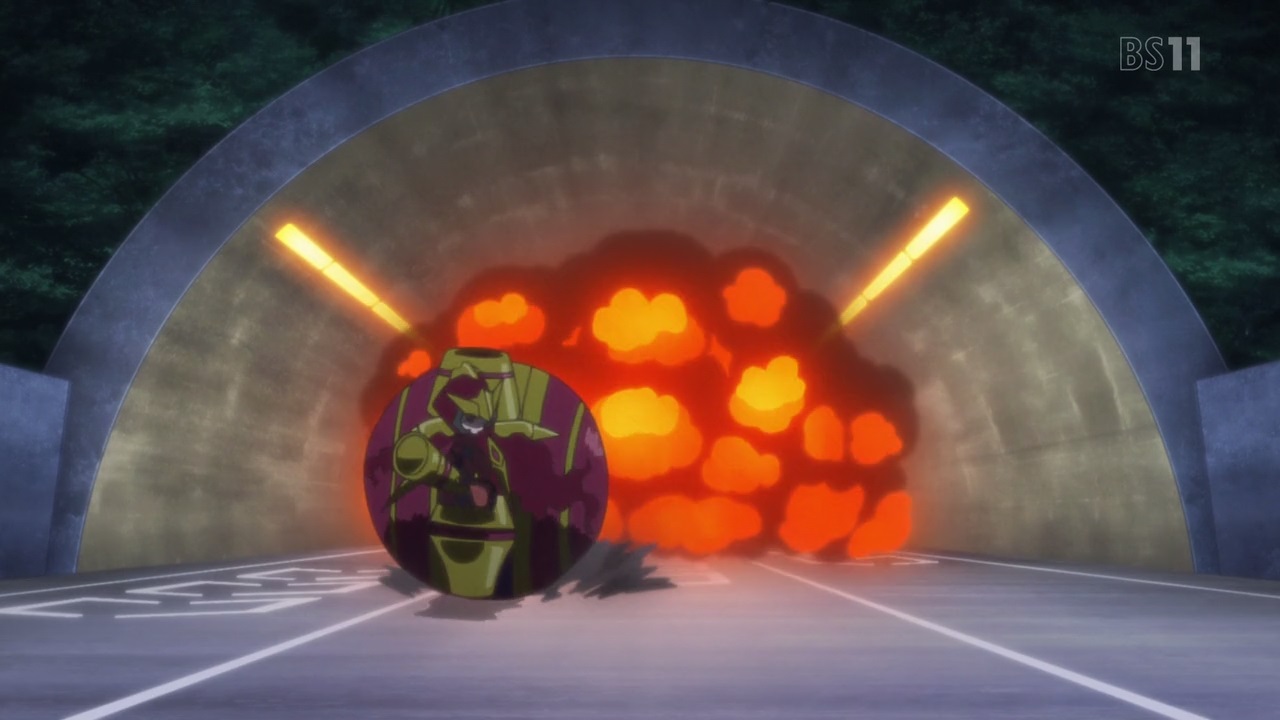 …the tunnel might explode into a sea of flames. Well, seems that both Symphogear users are a goner now! 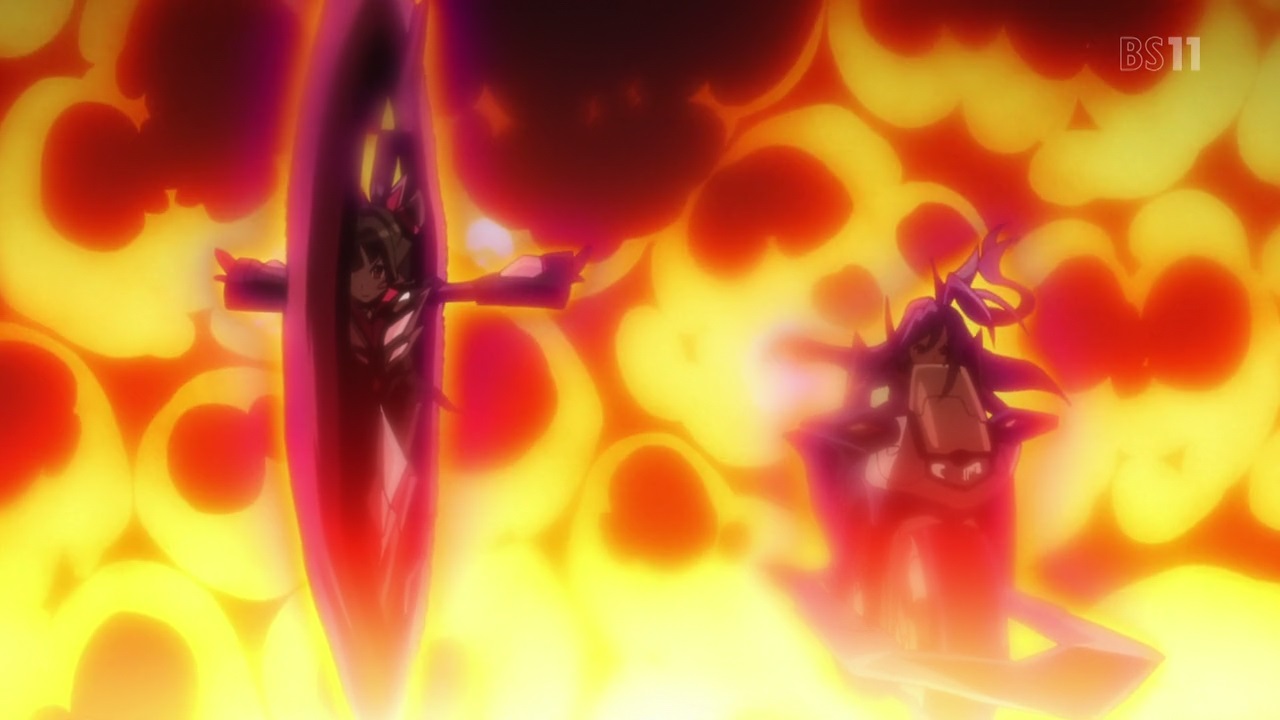 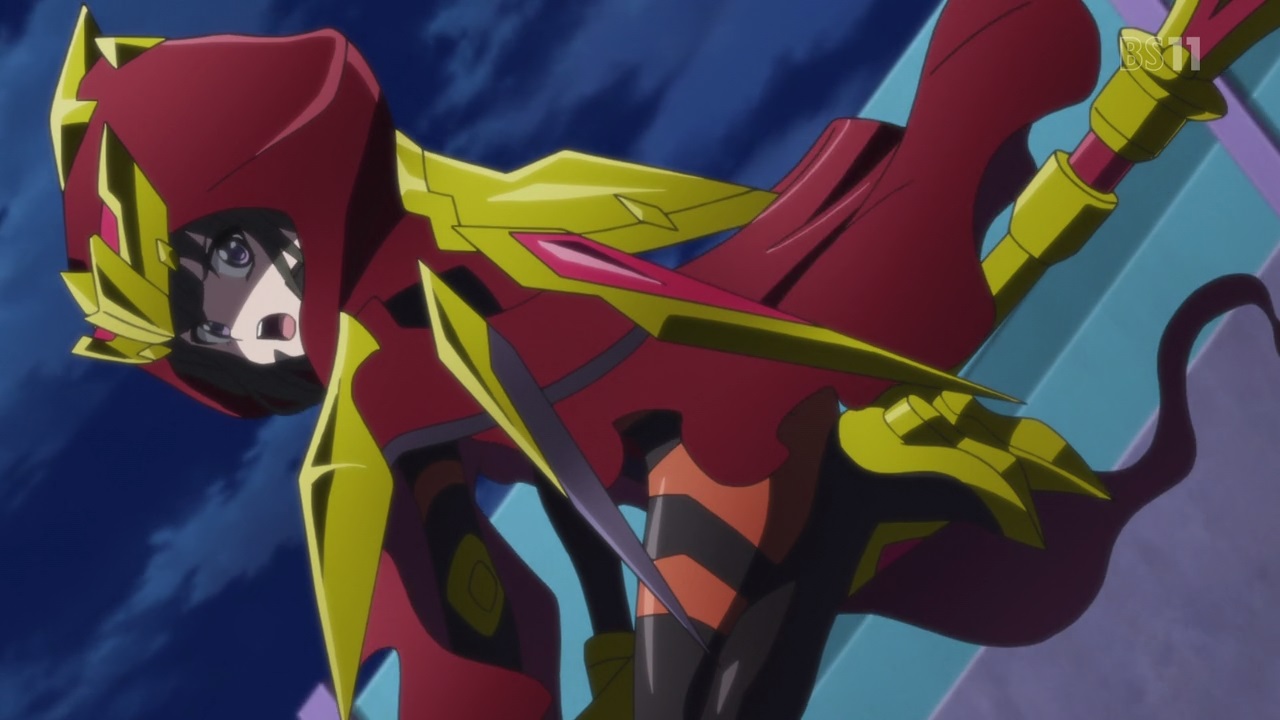 Just kidding, looks like Dainsleif’s newly-improved powers have saved both Shirabe Tsukuyomi and Tsubasa Kazanari that Prelati couldn’t believe it.

Still, I wish that a peaceful solution will happen between an alchemist and two Symphogear users. 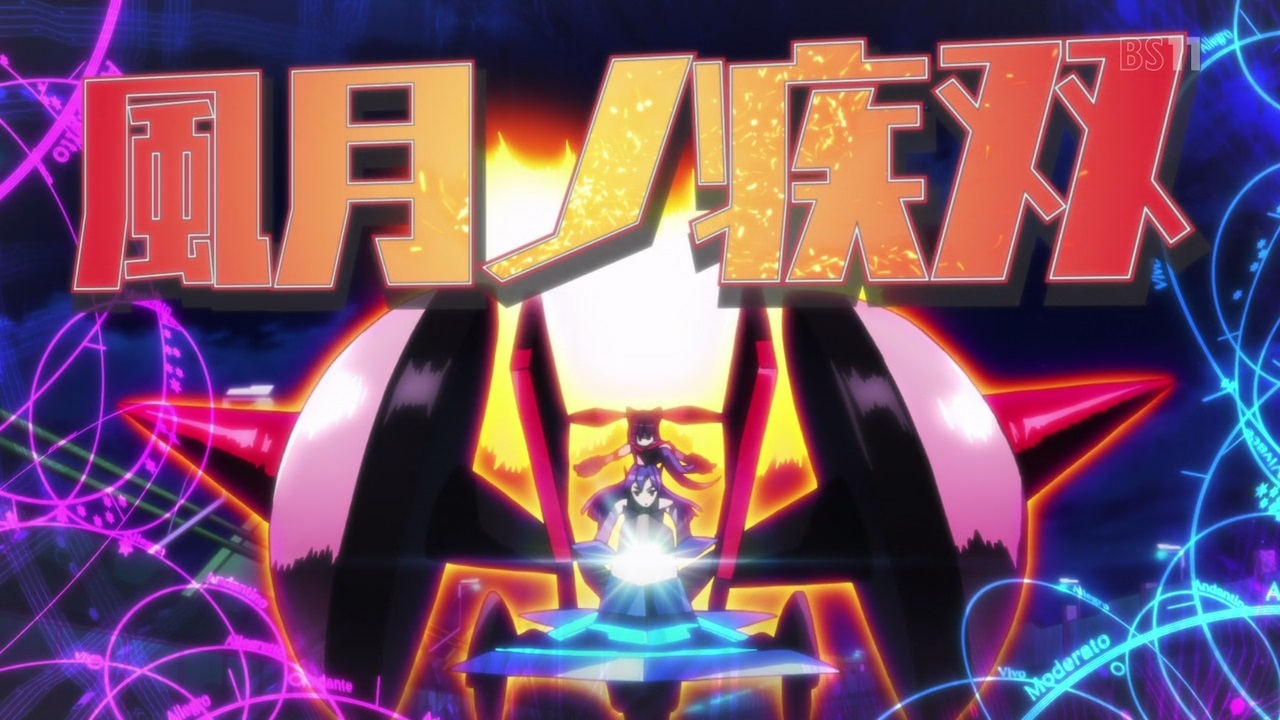 But nope, seems that the only option for both Shirabe and Tsubasa-san is to kill Prelati because she’s a threat to humanity… by performing a powerful duet song/attack at the alchemist. 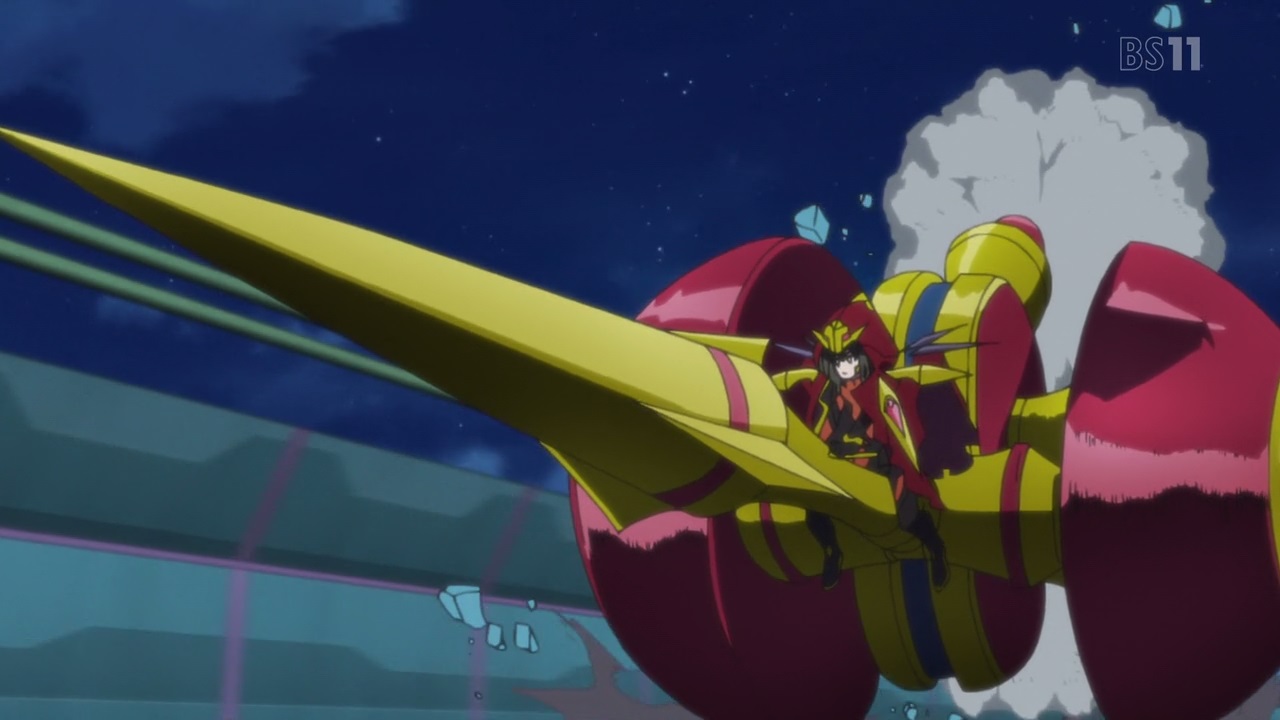 Well, this means that Prelati has not other choice but to retaliate, which is bad because there’s a chance that she might not live to tell Saint-Germain about Adam’s real plan! 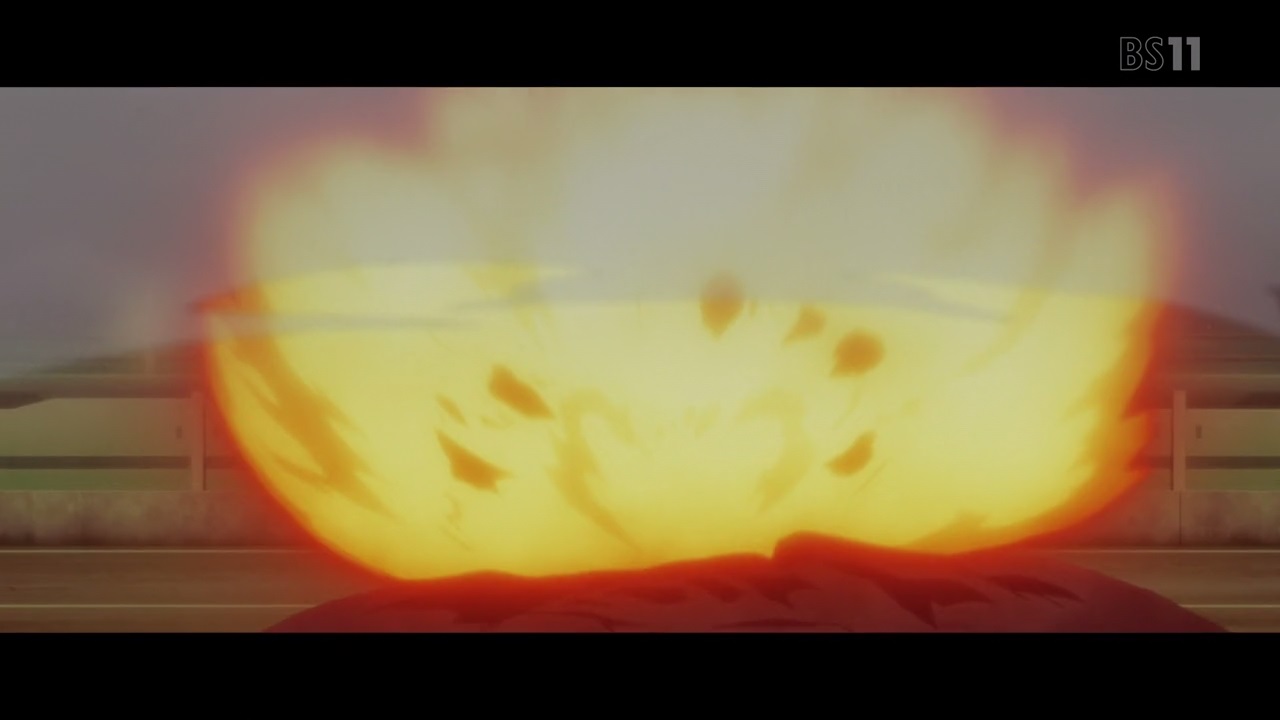 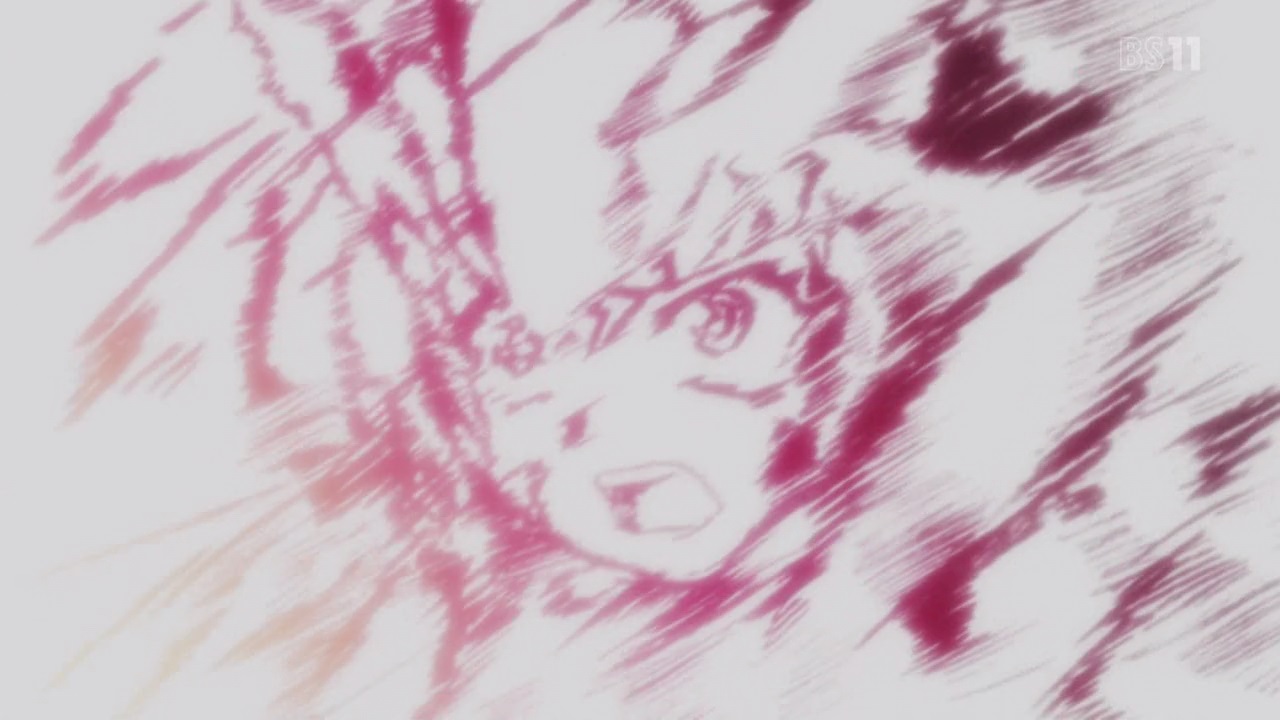 In any case, this battle ends with a cinematic explosion where Prelati bite the dust. Damn, that was brutal and also, Adam Weishaupt’s motives remains a secret to everybody! 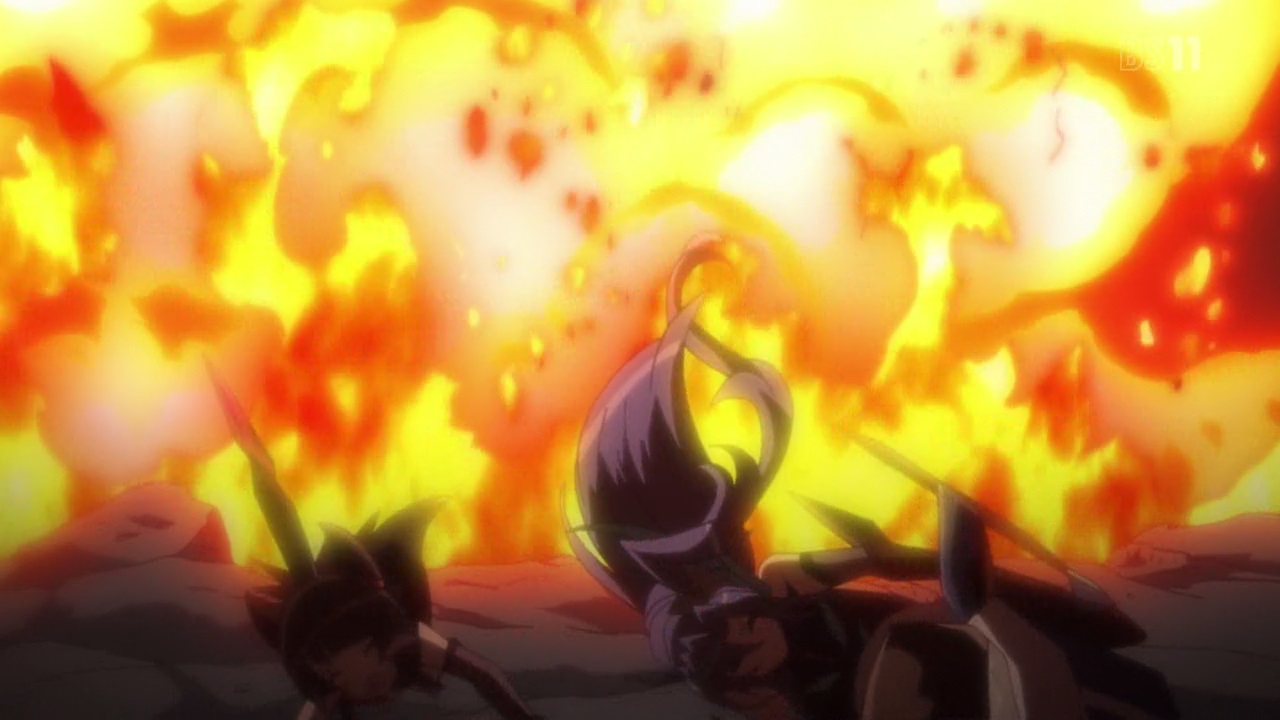 As for both Shirabe Tsukuyomi and Tsubasa Kazanari, they survived thanks to their improved Ignite Module. Of course, Shirabe learned a lesson from Tsubasa-san about trusting and caring towards other people.

Well, I’ve enjoyed the character development from Shirabe Tsukuyomi, not to mention having a duet with Tsubasa Kazanari in which it’s the awesome thing that happened on this episode! 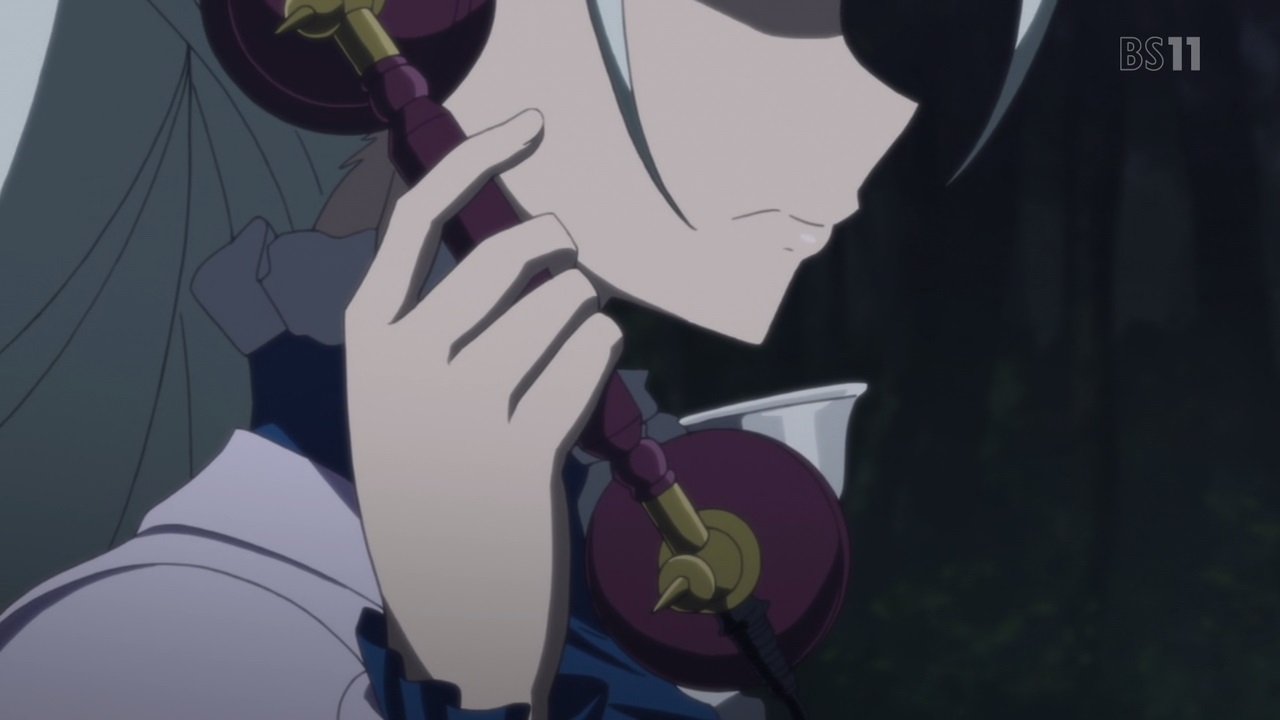 Now then, that leaves Saint-Germain the only alchemist left to stop the Symphogear users and finish the altar ritual of opening the Divine Gate. I’m hoping that Hibiki Tachibana spares Saint-Germain’s life ’cause it’ll be her fault for completing the ritual, thus gaining Adam Weishaupt’s divine powers!

Anyways, I’ll see you next time as I’m finished catching-up with Symphogear AXZ. I can’t wait for the next episode!