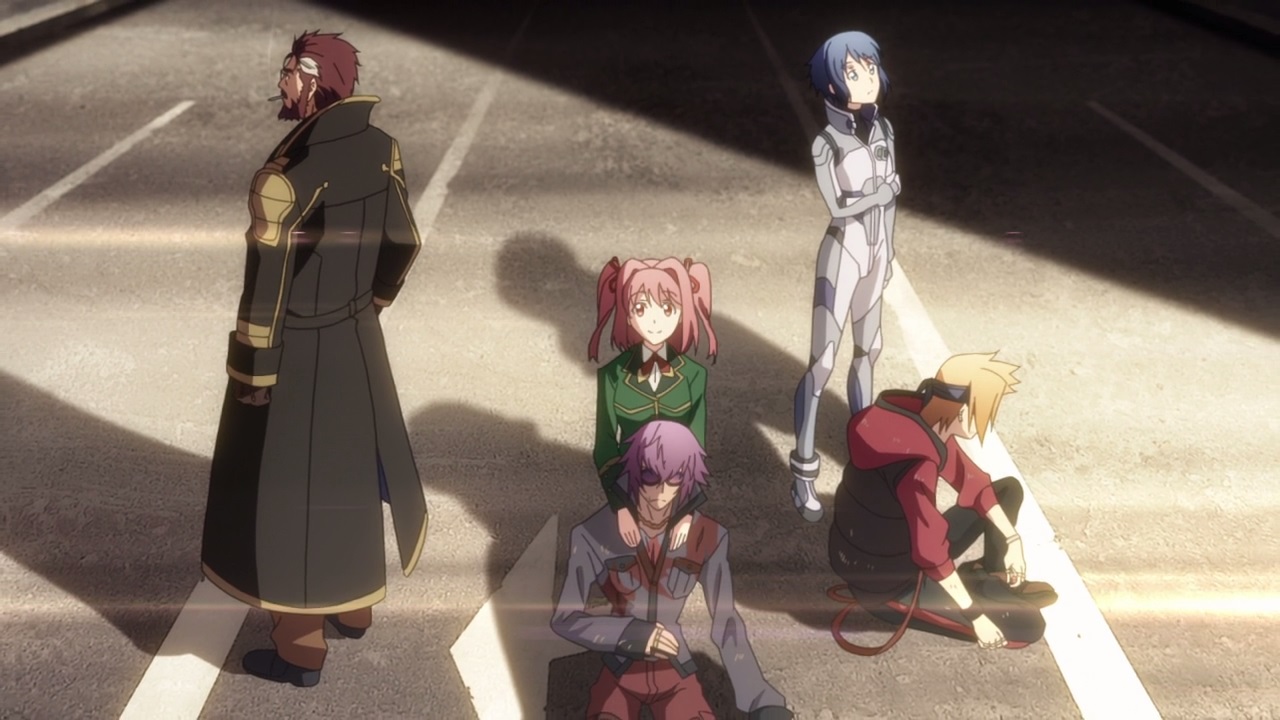 Well, seems that the rest of the characters have survived the Elimination Chamber Festival, which is all good since they don’t have to suffer at the hands of the military-clad princess. 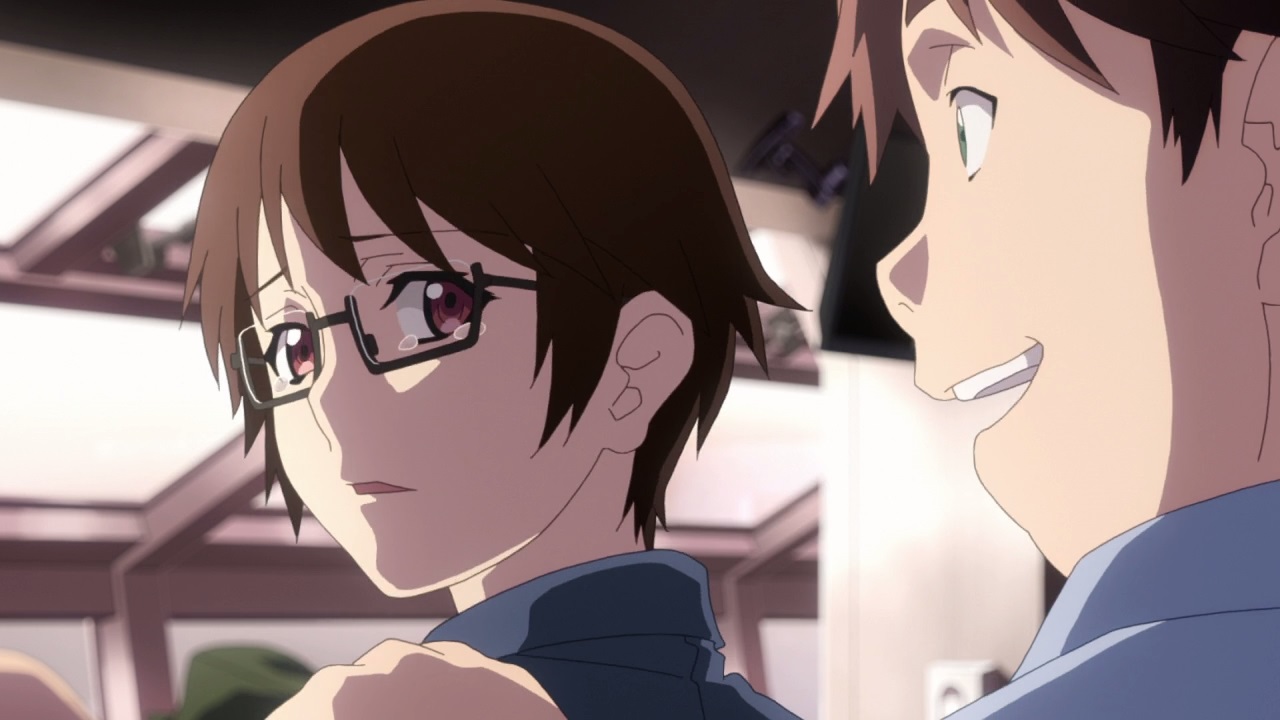 Meanwhile, looks like the creators are congratulating Souta Mizushino for saving the entire world from Altair’s wrath. Of course, it wouldn’t be possible without Magane Chikujouin’s intervention in which she’s missing in action!

With that said, the Elimination Chamber Festival was a success but there are a few people who are still sad that some of their creations are dead. 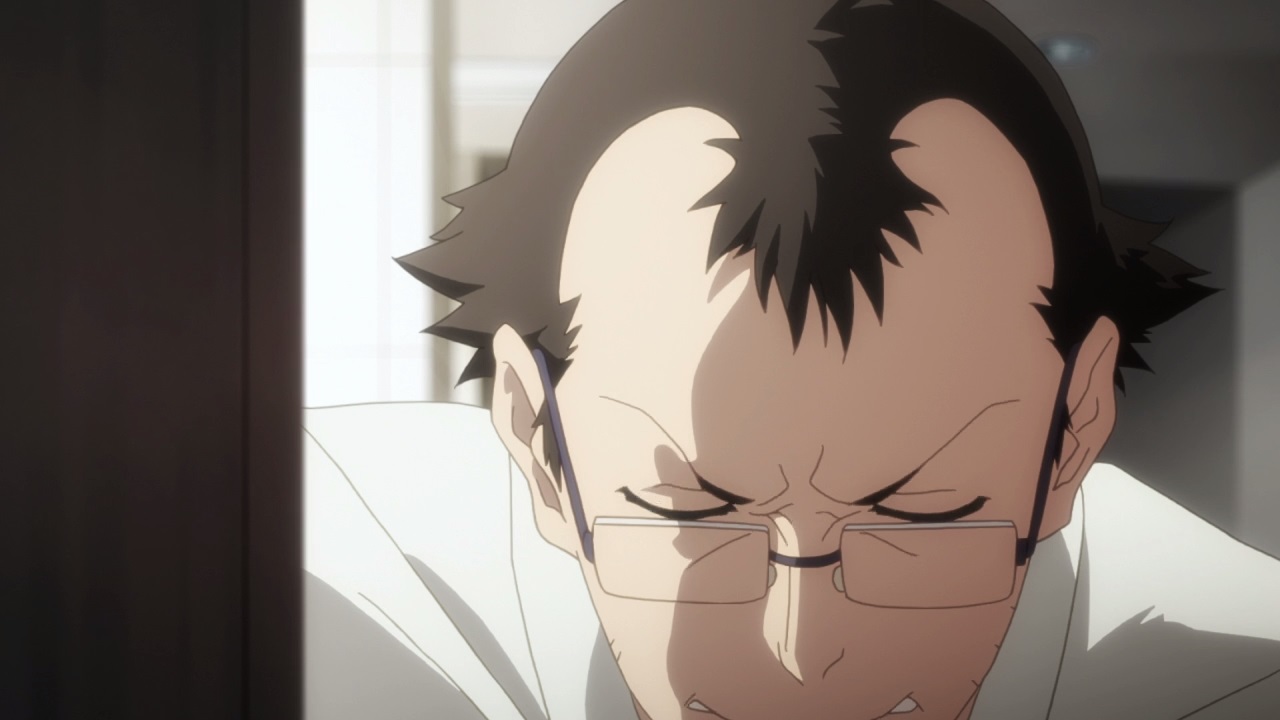 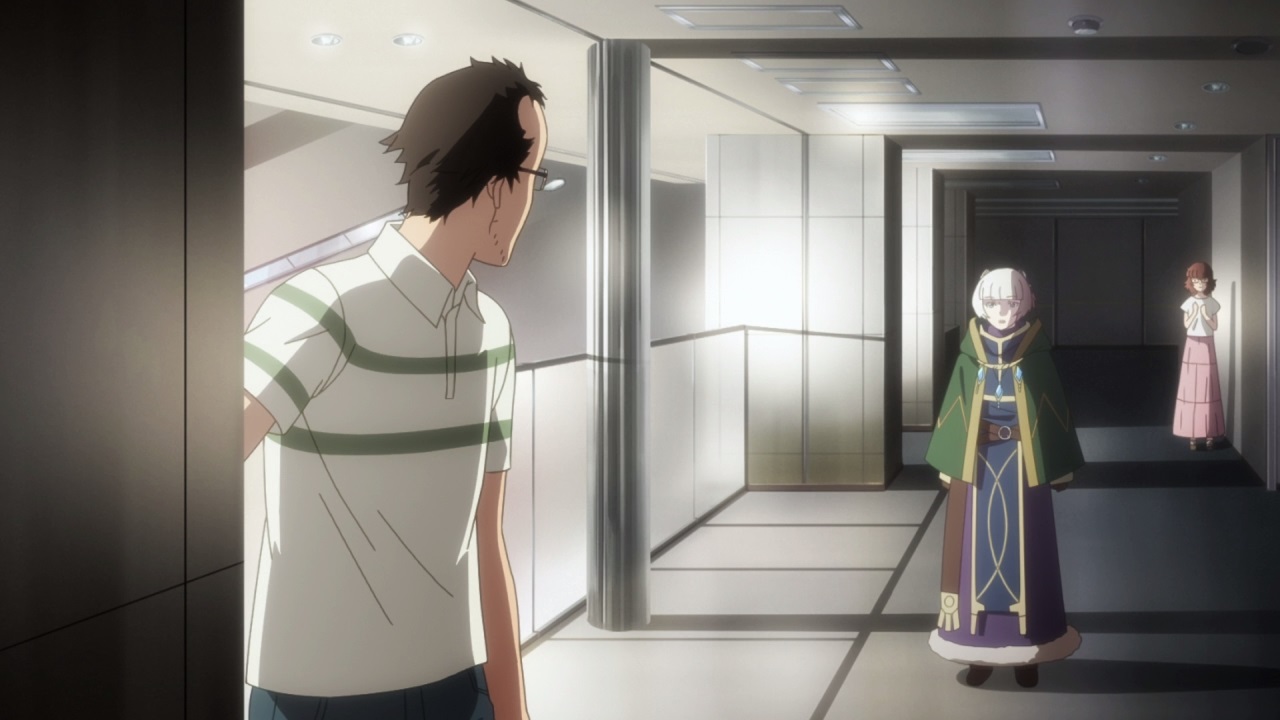 However, Meteora Estherreich reminded him about Selesia’s promise towards her creator as she wanted Matsubara to continue writing stories until it reached a satisfying conclusion, including “Elemental Symphony of Vogelchevalier”.

Basically, Meteora told him not to give up his career as a creator because that would leave Selesia Yupitilia’s story unfinished. And besides, Takashi Matsubara’s stories are proof that he existed! 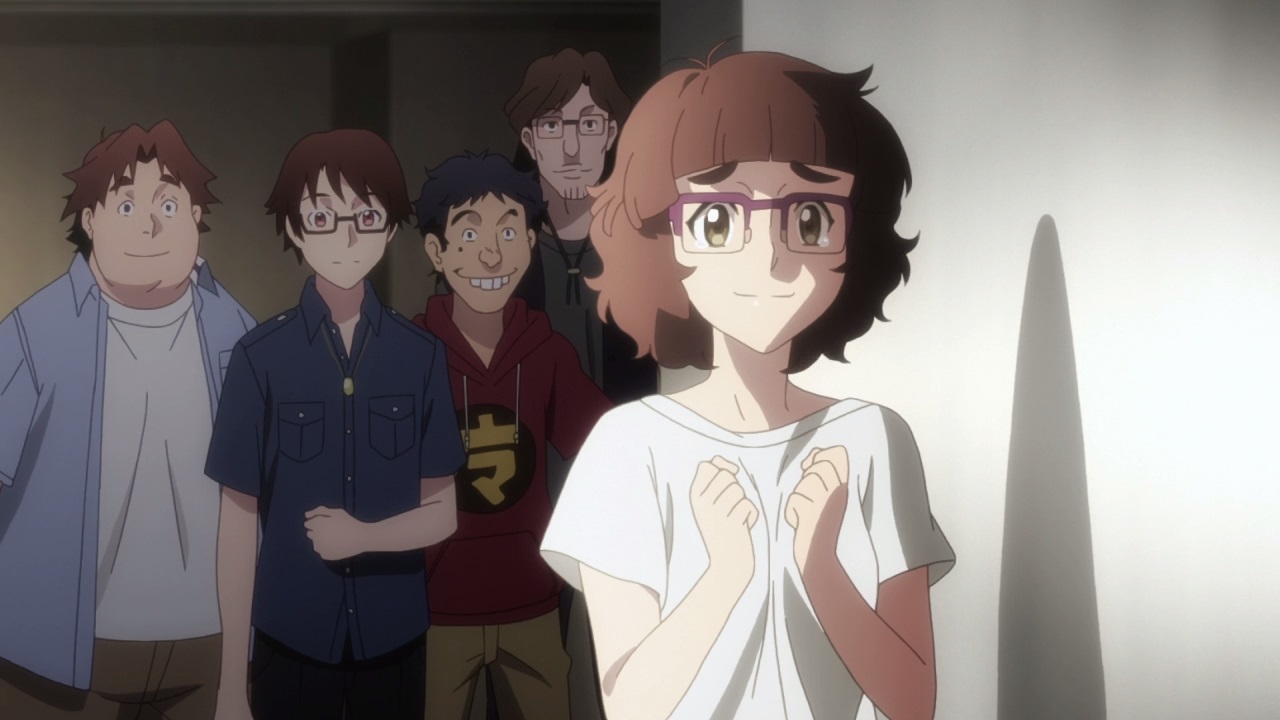 With that said, seems that Takashi Matsubara will continue to write stories. Heck, even Marine felt relieved to hear that!

Anyways, now that the Elimination Chamber Festival is finally over, it’s time for the characters to return home. 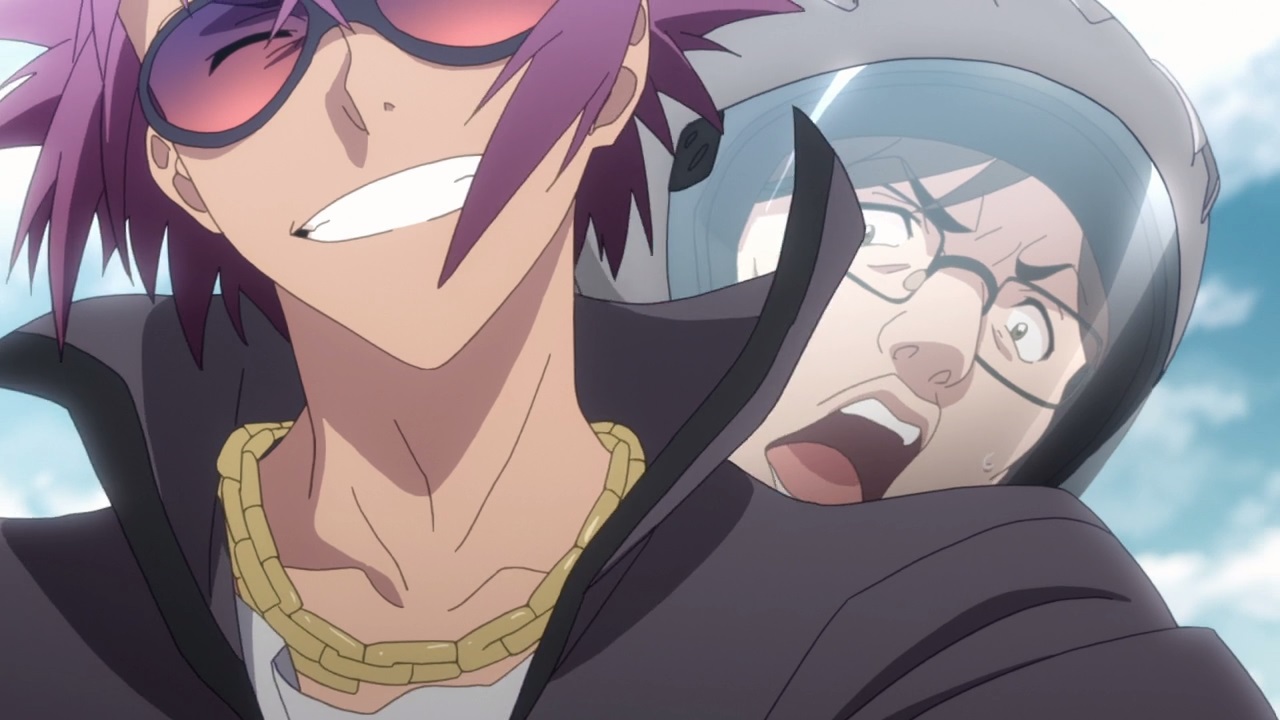 But first, they need to spend their time with the creators as Yuuya Mirokuji invited Ryo Yatoji for a joyride. 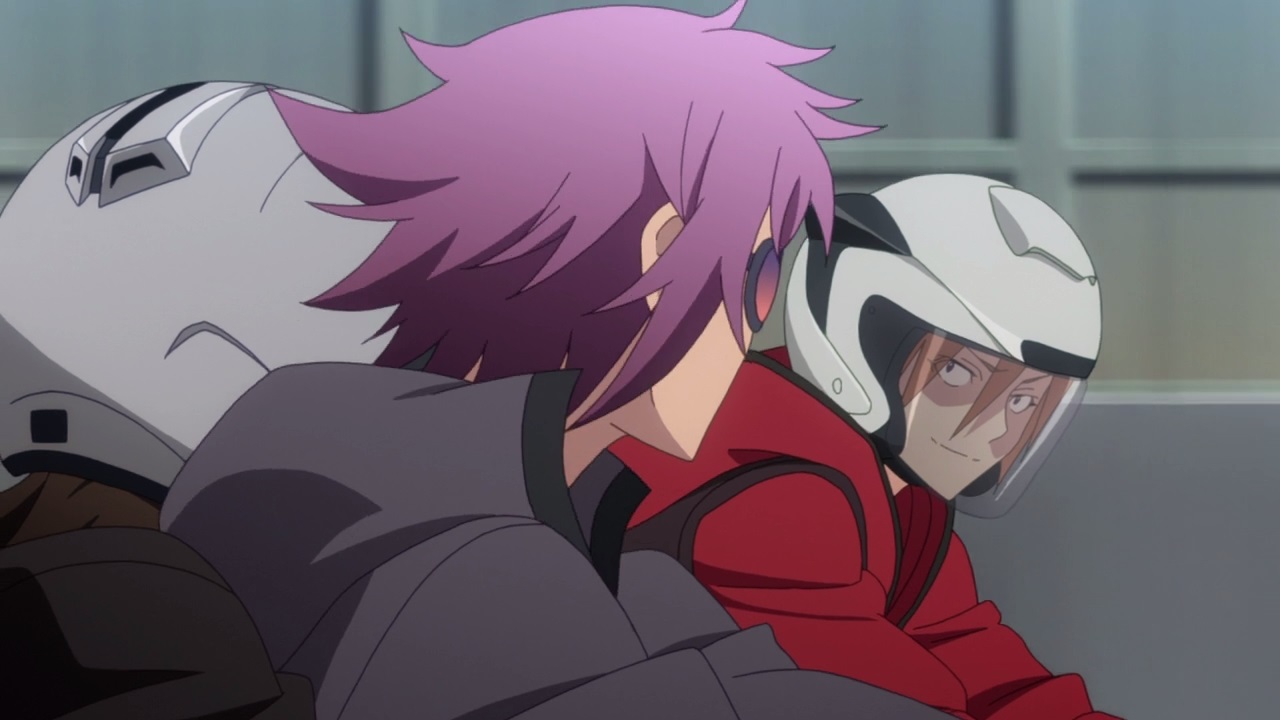 Oh, and let’s not forget about Shou Hakua as he joins the party too. Yeah, seems that he’s happy instead of being mean-spirited towards his rival!

Even since Yuuya spilled the beans about the real villain of “Lockout Ward underground-dark night” during the Elimination Chamber Festival, Shou Hakua became friendly towards Mirokuji that he felt sorry for wrongfully accusing him. 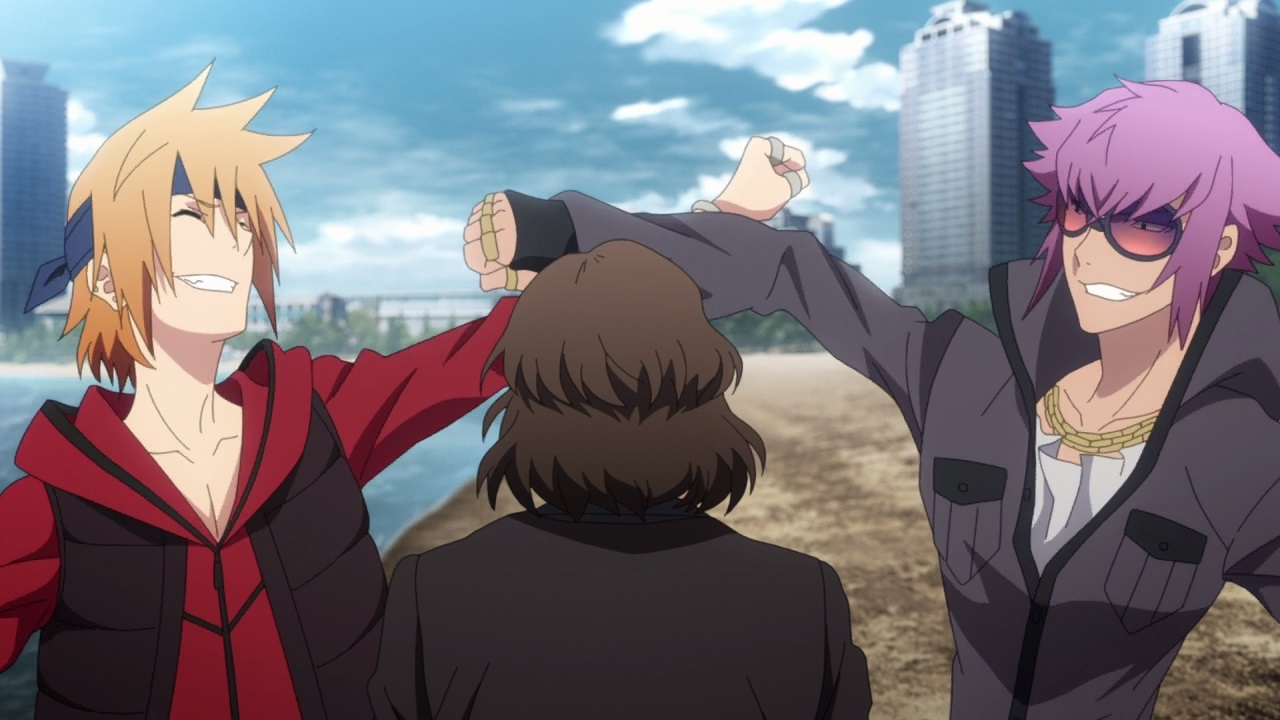 See, they’re best buddies after the Elimination Chamber Festival. Now, the only thing that Ryo Yatoji will do now is to rework the plot after Mirokuji spoiled everything! 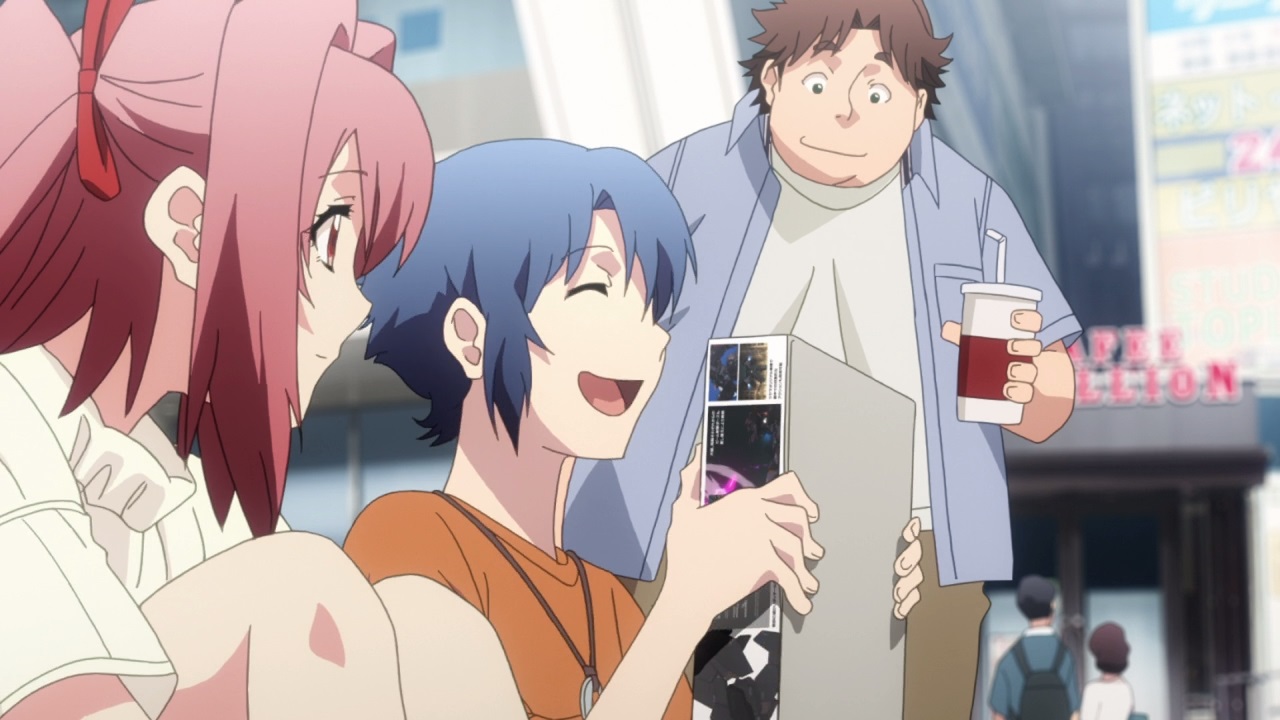 As for the rest of the cast, looks like things have finally settled down with Maasaki Nakanogane giving Rui Kanoya a Gigas Machina model kit.

Hmm, I wonder if he’ll use that for a plastic model battle in “Infinite Divine Machine Mono Magia”? I mean, Rui Kanoya’s series has some shout-outs to Gundam franchise! 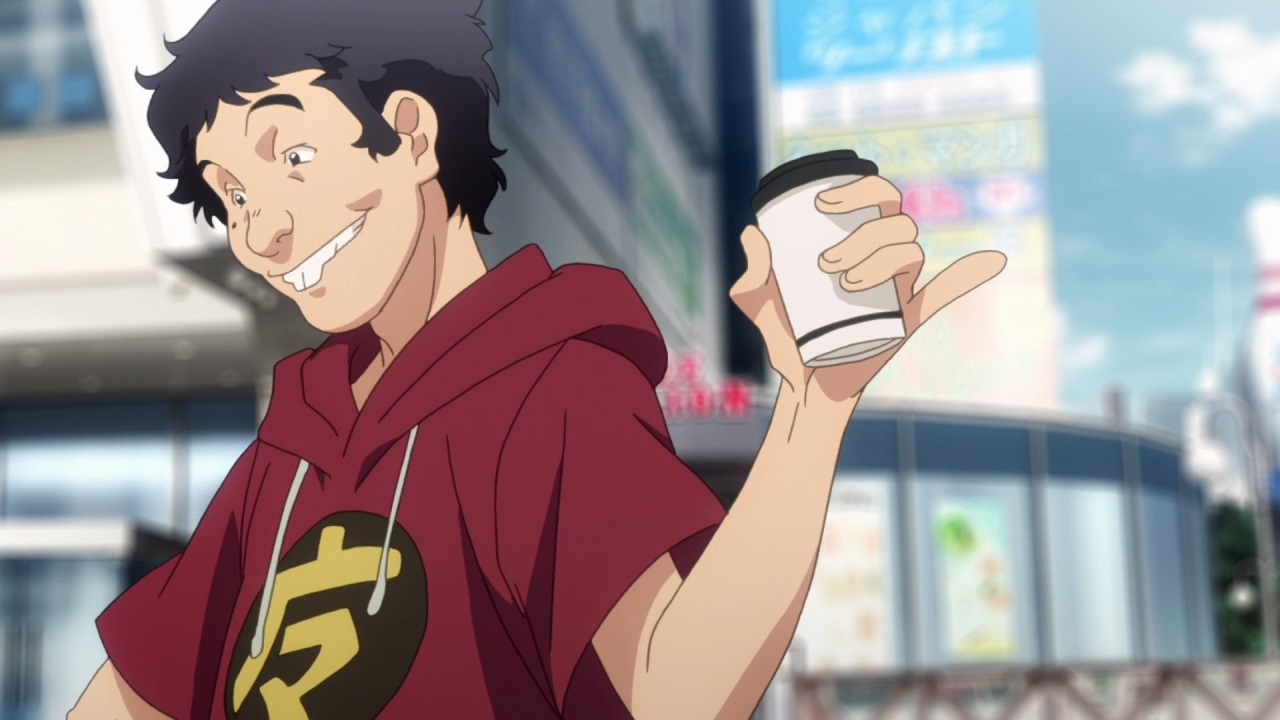 Oh yeah, speaking of Hikayu Hoshikawa, seems that her perverted creator Nishio Onishi has some plans regarding his own visual novel game “The Milky Way of a Starry Sky”, like making a spin-off anime based on the events during the Elimination Chamber Festival.

Then again, Hikayu doesn’t want to wear another embarrassing outfit as she’ll save it for Masayuki. But hey, at least Onishi truly cares about his daughter instead of not caring at all like putting Hikayu-chan in an idol spin-off. 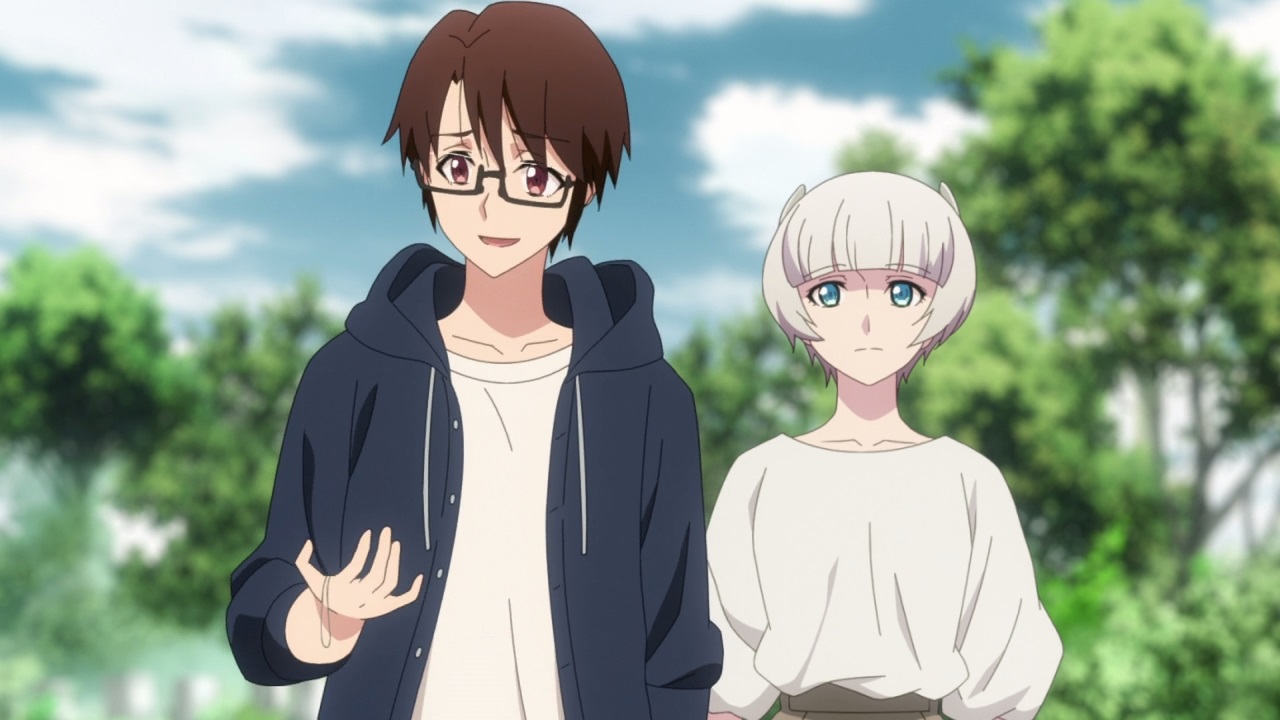 Lastly, it’s time for Souta-kun and Meteora to visit Setsuna Shimazaki’s grave and pay their respects on Altair’s creator.

Also, Souta told Meteora that Magane’s Fool’s Gold pendant has helped him on bringing a dead person back to life and stop the military-clad princess through the power of kindness. 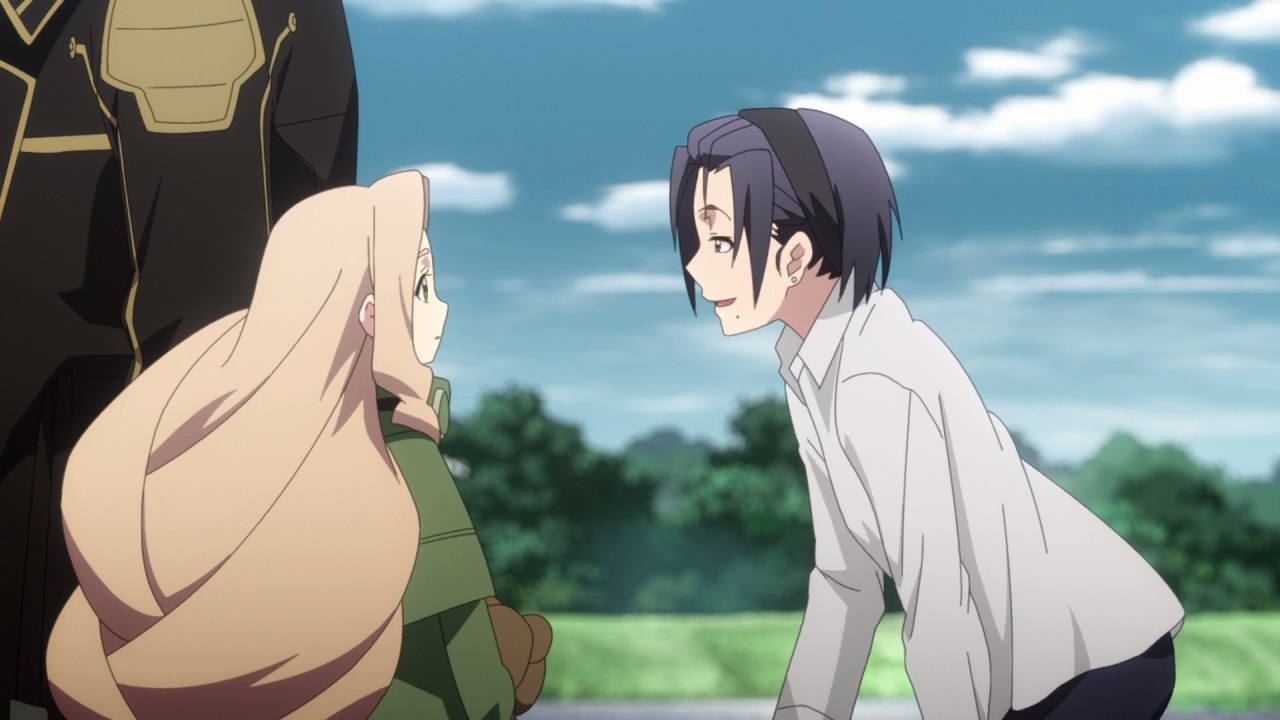 Now then, it’s time for the survivors of the Elimination Chamber Festival as the creators says good-bye to their creations.

Oh yeah, here’s Shuuma Suruga as she told Erina Talker to take care of herself. I mean, Shuuma-san will do great lengths to make Blitz Talker suffer for the entertainment of her readers. 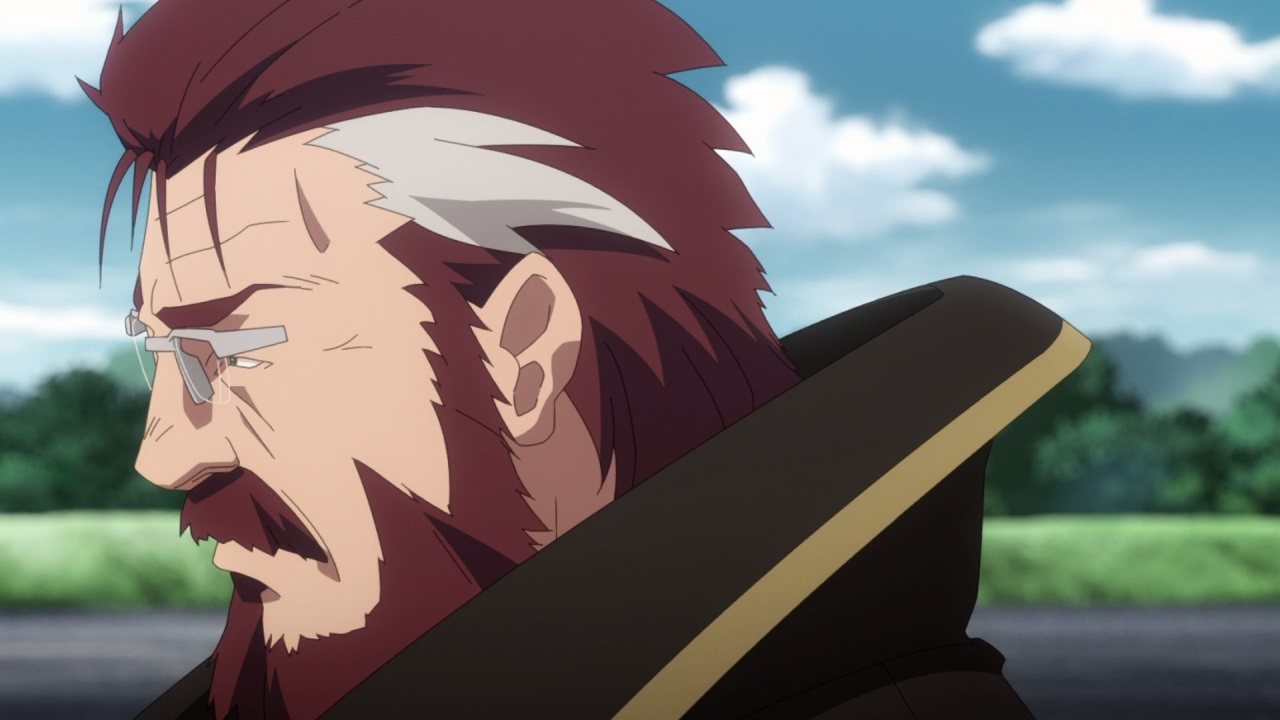 As for Blitz, sure that he still hates Suruga but Blitz’s creator told him to survive and overcome obstacles together with his daughter Erina. After all, the world of “code.Babylon” is a dark and gritty place where the weak perished.

And with that, all of the characters returned to their respective worlds. Yeah, I’m gonna miss them a lot! 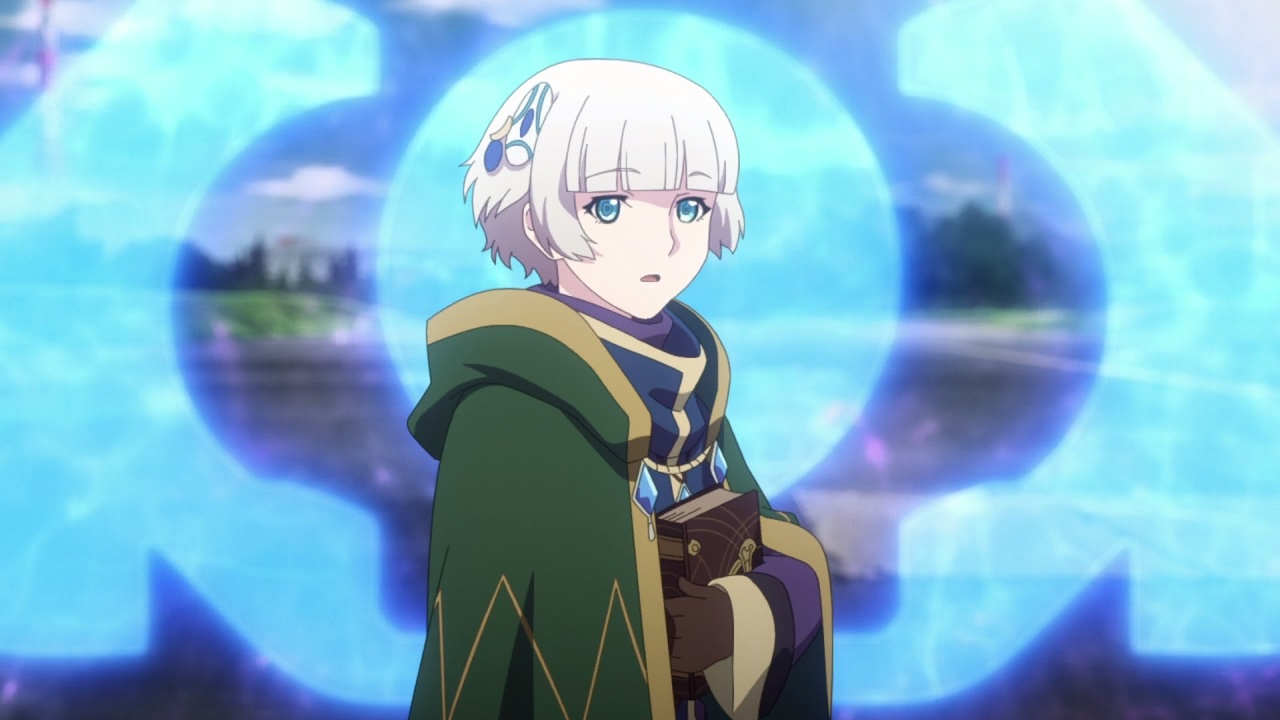 Well, except for Meteora Estherreich in which she can’t return to “Recollection of Avalken” because it’s impossible to use her transportation magic on herself. And besides, her magic is weakening anyway.

So, Meteora decides to stay in the real world and put her efforts on becoming a novelist. Looks like the created has become the creator! Of course, it wouldn’t be possible without Aki Kikuchihara’s help… 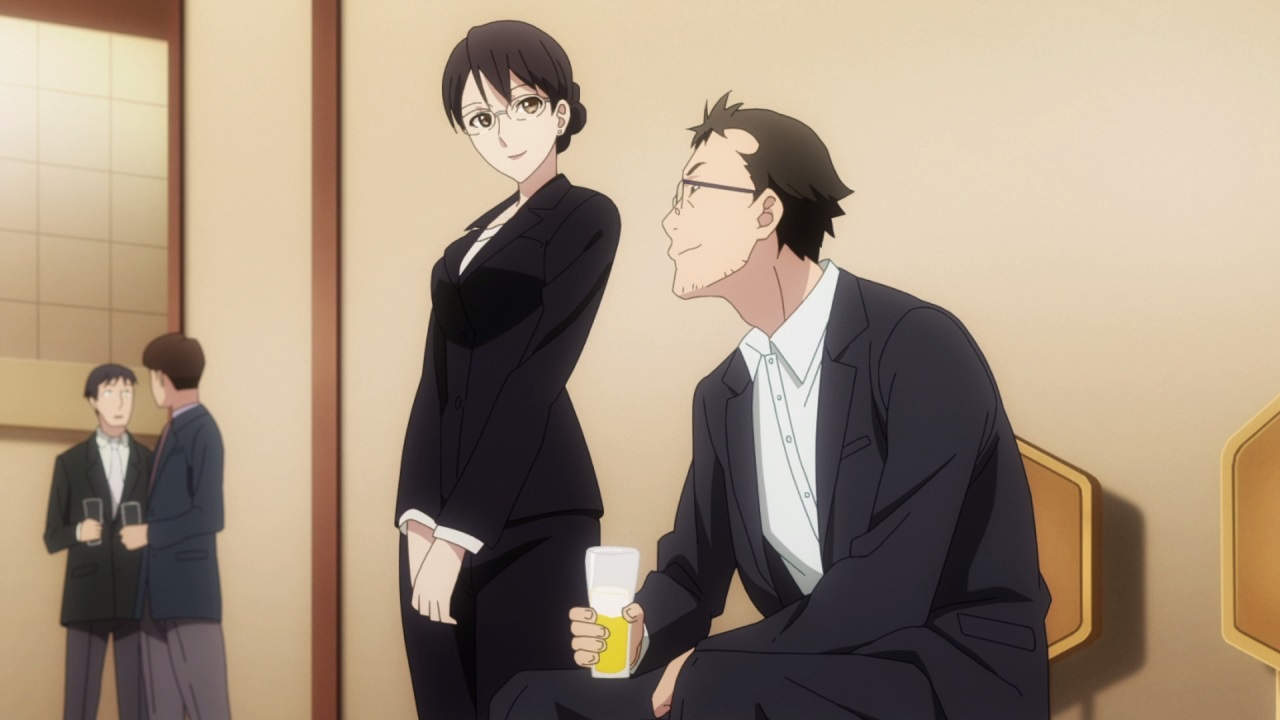 …as she left her government job for something more creative like an event organizer or maybe an author. Yeah, that surprised Takashi Matsubara very much! 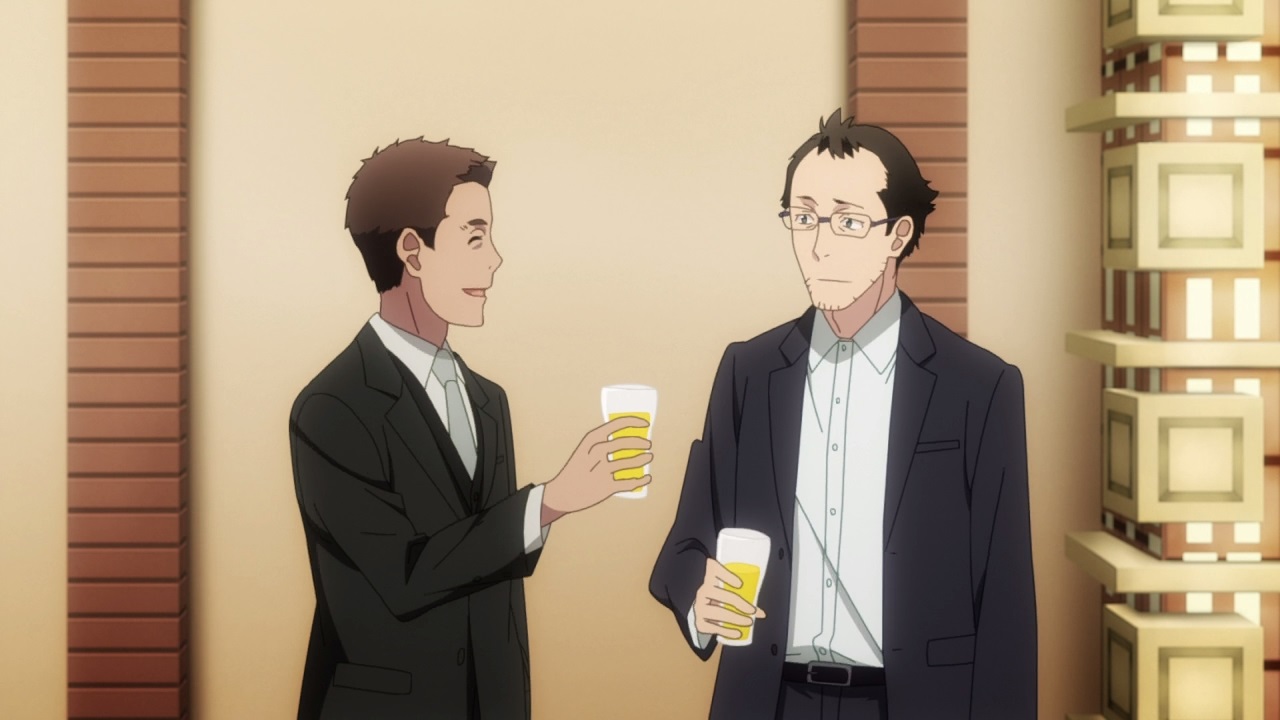 Also, here’s Gai Takarada after taking his award for his manga series “Alisteria of the Scarlet”.

Sure that he lost Alisteria February during the fight against Altair, but Takarada got back on his feet and started working on finishing Alisteria’s story until it reached a good ending. C’mon, he needs to give his all as if Gai’s life is on the line.

On the other hand, seems that Gai Takarada wants to collaborate with Takashi Matsubara where he’ll be the illustrator. Then again, Takashi would like to stick with Marine for the time being. Maybe someday, they’ll collaborate for a project but for now, they need to focus on making their stories exciting not only for themselves, but for the fans! 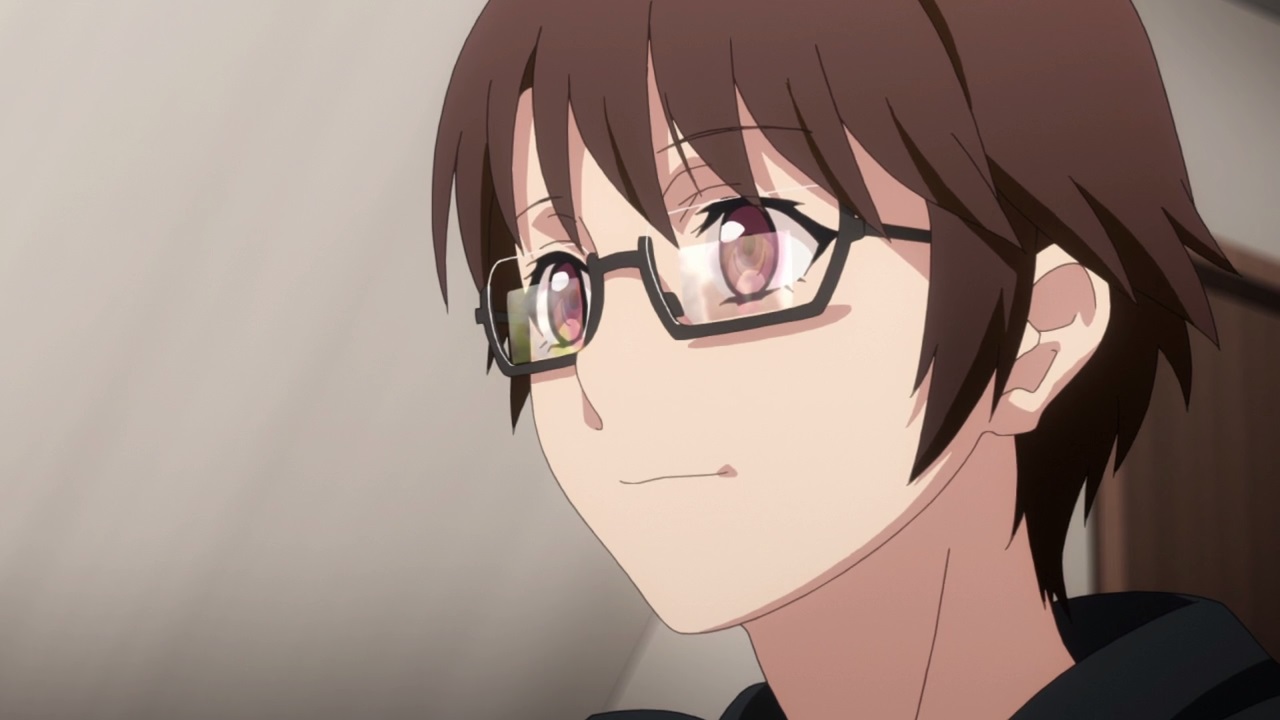 And lastly, here’s Souta Mizushino as he’s inspired to make illustrations after his experience during the Elimination Chamber Festival… 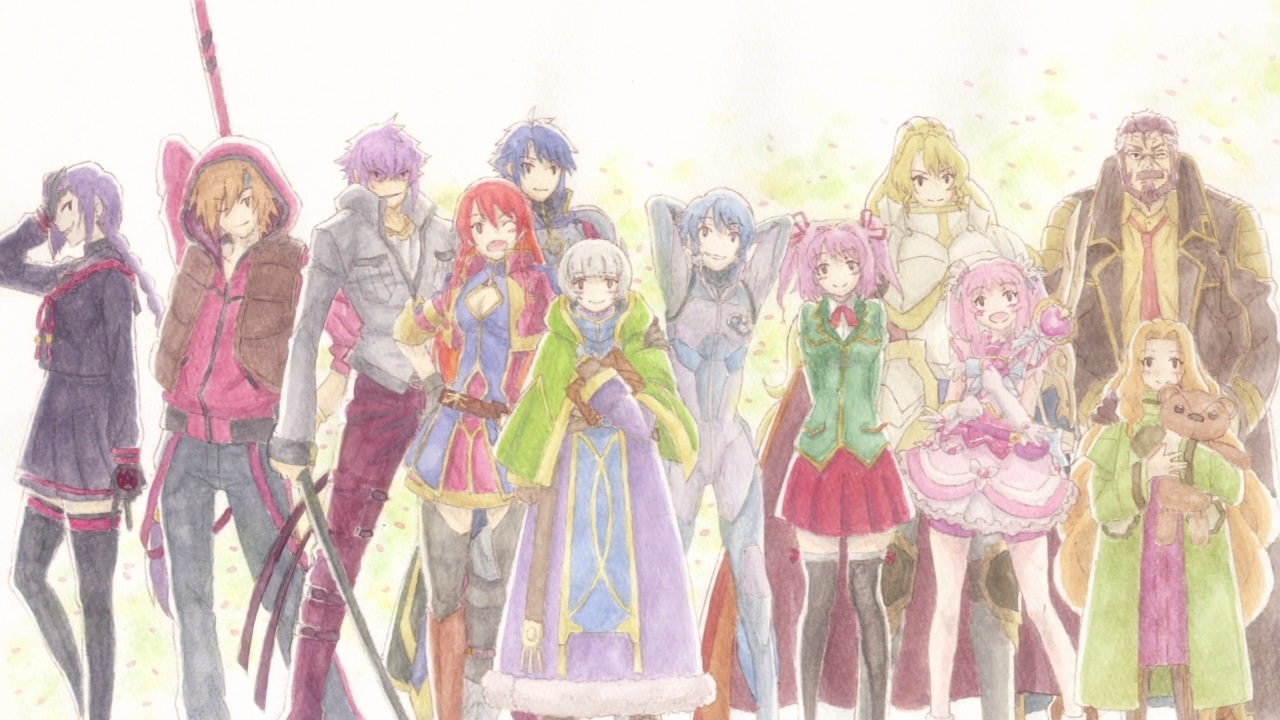 …by making this final piece of artwork. It might not looked impressive, but the love and passion that Souta-kun put on this illustration is so heartwarming! And that’s the end of Re:CREATORS where it ended happily ever after. Then again, there are some issues that hold this series into getting that perfect score.

First of all, all I can say is that Altair is just too overpowered that the only way to “defeat” the military-clad princess is to send Altair into another world with Setsuna Shimazaki. Sure that she’s a tragic character and I want to sympathize her, but Altair just decimate most of the cast and killed both Mamika Kirameki and Alisteria February with little difficulty. Maybe it would be better if Magane Chikujouin stole the damn show!

On the other hand, I feel that some characters needed some more backstory or even grow a spine for once. Take Charon for example as he’s arrived in the real-world to take Selesia back, but I feel that he needs more insight into why Charon joined Altair’s side instead of saying that he’s tired of fighting. For Souta Mizushino, I feel that he’s being out-of-focus in the second half until the last episodes, as well as being spineless after learning the military-clad princess’ true identity. Good thing Magane broke Souta-kun down that he decides to tell everything on what he know, but I feel that Mizushino should have told everything right away instead of keeping to himself. As for other characters like Hikayu Hoshikawa and her creator Nishio Onishi, sure that it’s a random inclusion but they need to have likable personalities.

Aside from issues regarding the characters, everything looks good from the animation by TROYCA, the story in which I got hooked after the first episode, to the bombastic original soundtrack by Hiroyuki Sawano. Overall, I’ve enjoyed watching Re:CREATORS despite its flaws and I’m gonna miss watching this show. Anyways, see ya!